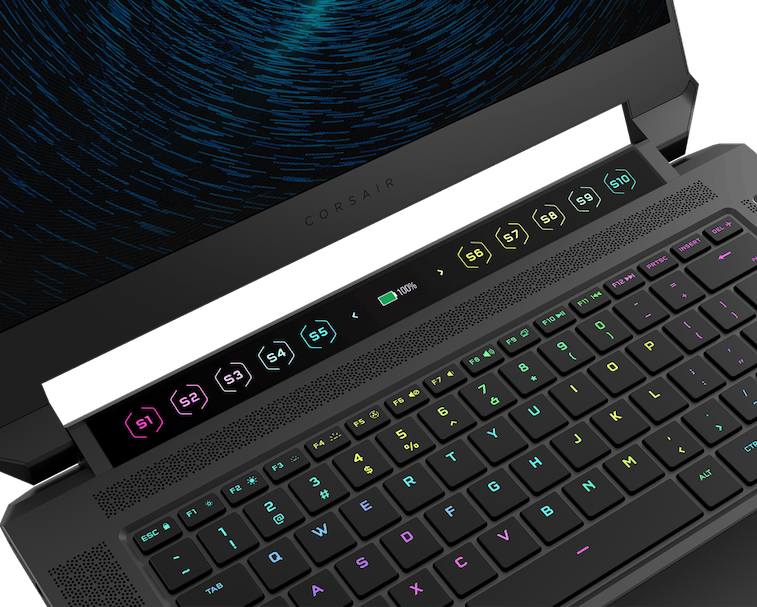 Corsair is more known for its peripherals or hardware, but its first gaming laptop is coming in with bang. The Voyager a1600 laptop was designed with gaming and streaming in mind, so there’s an interesting touch bar-like design that features 10 extra keys.

I know, I know. It’s giving all the MacBook Pro users flashbacks of the dreaded Touch Bar. But hear me out, it actually looks like Corsair’s design is decent and something that people would actually use. It’s more like 10 programmable keys with a tiny LCD screen in the middle, rather than a long OLED touch strip that is meant to display more information than just a button. Plus, it doesn’t actually replace the function keys, so you still get Esc and F keys with the Corsair Voyager a1600.

Corsair joins Dell’s XPS 13 Plus, another laptop that is trying out touch bar-like buttons on its laptops. The implementation is different, but there’s no way not to draw a direct line between these and Apple’s ill-fated Touch Bar.

It’s a “macro bar” not a “touch bar” — Corsair may have anticipated some initial hesitancy with the design, especially since even Apple looks like it’s off the Touch Bar design for now. Corsair is calling it a “built-in macro bar” that has “S-key shortcut buttons” because they’re designed specifically for Elgato’s Stream Deck shortcuts. The 10 customizable buttons are even accessible when the laptop is closed, which makes it look like a good option for a streaming hub when it’s not actually open.

While the Voyager a1600 seems like a handy streaming tool, the webcam can only hit 1080p at 30 fps making it a weak choice for livestreaming; you want at least 60 fps for that. That said, the laptop’s webcam does have a privacy shade and is supported with a directional four-way microphone setup that offers ambient noise cancellation.

The 16-inch display has a 16:10 aspect ratio with a 2,560 x 1,600 resolution and a 240Hz refresh rate. The laptop is built with Cherry MX Ultra-Low Profile key switches and has per-key RGB backlighting. Corsair threw in a bunch of ports as well, including two Thunderbolt ports, a regular USB-C port, a USB-A port, an SD card reader, and a 3.5mm audio jack. And, of course, there’s plenty of RGB on the keyboard backlighting.

The Voyager a1600 laptop starts at $2,700, with the most powerful edition costing $3,000. Corsair didn’t release any details on when the gaming laptop goes on sale, but said it will announce availability later on.