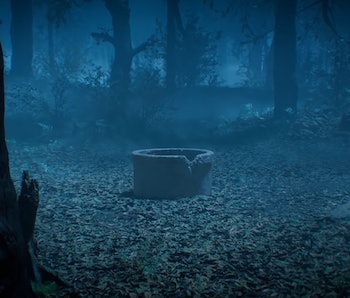 Since its release in 2016, Dead By Daylight has quietly (punctuated by occasional shrieks) amassed a deep bench of both original and iconic slashers to torment hapless victims.

Start up a round, and your assigned villain now has a choice of DLC including, but not limited to, Pinhead, Michael Myers, Silent Hill’s Pyramid Head, and even the Demigorgon from Stranger Things. Soon, they’ll even be able to haunt the hell out of opponents as the iconic Japanese ghost, Sadako, from Ringu — otherwise known in the states as Samara from The Ring. Check out the announcement trailer below, and mark your calendars for Sadako’s arrival this March.

A commitment to source material — Based on Kōji Suzuki’s 1991 novel, Ring, the original 1998 Japanese film adaptation, Ringu, centered on a cursed videotape which would summon the murderous, ghostly entity, Sadako. The 2002 stateside megahit remake, The Ring, introduced mainstream American audiences to the story, this time with a spirit named Samara.

What’s particularly cool about this new Dead By Daylight DLC is that it explicitly appears to be paying homage to the original 1998 film and source novel.

"The importance of the Ringu franchise in Japan, and its influence on culture around the world are undeniable. To be given the opportunity to dive into that legendary story as we bring this creation into Dead by Daylight is an immense honor,” said game director, Mathieu Côté, in an announcement.

Myriad murderers — Asymmetrical gaming conceits like Dead By Daylight — in which one player assumes essentially the role of a level boss — have become increasingly popular over the years, and obviously lend themselves extremely well to horror scenarios. Just last week, an asymmetical Texas Chain Saw Massacre title was announced during The Gaming Awards, in which one lucky(?) player assumes the role of Leatherface... who incidentally also is a character option in Dead By Daylight. Great, twisted minds think alike, right?