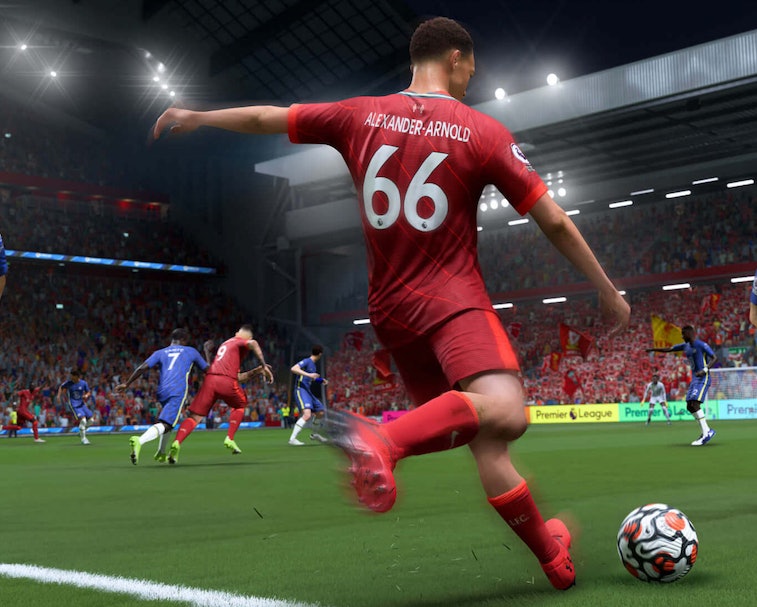 Fresh off the conclusion of the Euro and Copa América tournaments, EA Sports has unveiled the first look at FIFA 22. Spearheading the game’s latest entry, which will be the first to come to the next generation of consoles at launch, is new “HyperMotion” technology bolstered by FIFA’s most robust motion capture yet.

Using Xsens suits, EA was able to collect data simultaneously from 22 professional footballers playing at high intensity for the first time. In-game, the new technology enables more realistic movements at the individual player level and as the full team moves in-sync across the pitch. With more than 8.7 million frames captured, FIFA 22 has added 4,000 new animations. Using a new ML algorithm — called the “Flow machine learning algorithm” — each animation in the game will be written in real-time.

The reveal trailer shows returning cover star Kylian Mbappe — along with other players including Jadon Sancho, Christian Pulisic, and Son Heung-min — on the pitch wearing Xsens suits before seamlessly transitioning to their in-game renderings. Their movements do indeed look stunning in their precision, and now we’re just dying to get our hands on the game ourselves.

What else is new? — EA says it has rewritten its defensive AI, which gamers will be lining up to scrutinize after FIFA 21 has been criticized for having too effective computer-controlled defenders. In attack, the game promises players will be able to make “6x more decisions per second” — and a new tactical AI will affect both offensive and defensive formations.

Air battles have also been revamped and will see opponents jockeying for position by pushing, pulling, and jostling as the ball approaches. Longer two-touch animations promise to make controlling the ball more fluid and realistic — including more strength in shielding situations. And for a sense of realism that doesn’t impact gameplay, new off-ball animations have been added to show players talking, pointing, and directing each other.

Icons, FIFA’s collection of historically great players, will now be given a supplement in the form of “Heroes.” This new assortment of players widens the criteria for selection by including lower-rated players who’ve been popular in the near past, including Clint Dempsey (85 rating), Mario Gomez (88), and Jorge Campos (87). In addition to the green link typical between Icons and other players from their nation in Ultimate Team, green links will also be given for players in the league that they’ve been historically associated with. Dempsey’s card, for example, aligns him with the MLS.

A release date for FIFA 22 has yet to be announced, but pre-orders for the game have already opened. Similar to FIFA 21, EA will offer dual entitlement so that gamers who upgrade consoles won’t have to purchase the game again — but only for those who purchase the “Ultimate Edition” at $99.