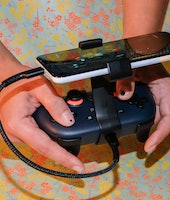 Way too much money for a piece of plastic.

Google's Stadia — touted as the future of gaming (maybe) — is quickly releasing missing launch features like Buddy Pass and adding more games to the library. Also coming soon: the "Claw" aka the plastic mount that's used to hold your phone in place above the Stadia controller. It's egregious enough that Google is overcharging $14.99 for a piece of plastic that's worth no more than $1 (or less) to make. The real question is why the hell isn't Google giving these things out for free to Stadia users?

Google is being cheap — The whole point of Stadia is that you can play on any device (phone, tablet, laptop, or TV). There's a very, very high probability Stadia users will be playing (or at least trying) the cloud gaming service on their phones. And yet, Google didn't toss in the dinky piece of plastic (that is what it is and nothing more) for free and instead is nickel-and-diming people $15 for it; there are phone grips on Amazon with frickin' cooling fans and built-in battery packs for $15. How are Stadia users supposed to play on their phones without it? Prop their phone up against something with a USB-C cable snaking into the controller? It's truly unfathomable.

As a token of goodwill for botching the launch, Google should give out Claws to every person who purchases Stadia. Google has a gazillion dollars in the bank; it's unlikely giving away free Claws will impact its next quarter earnings. Like seriously, don't buy the Claw. A company like Rngeo will have a three-pack of knockoff Claws for a lot less in no time.