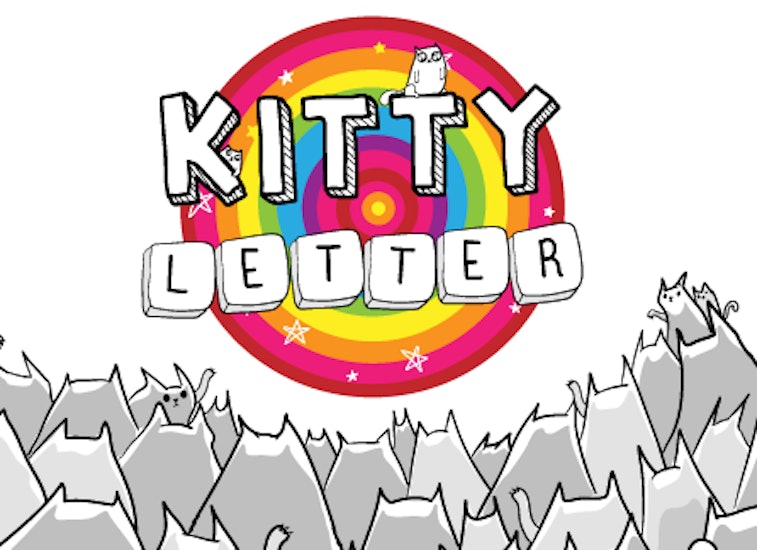 If you love The Oatmeal and the popular party game Exploding Kittens, their creator has created a mobile game where these two worlds collide. Kitty Letter is a new game available for iOS and Android brought to you by cartoonist Matthew Inman. And yes, the kittens explode.

It's a catfight — In Kitty Letter, you create words from a wheel of letters that powers your cat army. Your opponent, a new neighbor across the way, has a cat army of their own, and it's a race to make sure his kittens don't explode at your lovely house.

You can play in a single-player arcade, story-driven tutorial mode, as well as in a multiplayer mode against friends or strangers. The game’s “enchanted language vortex from the multiverse of infinite vocabularinitie” draws on a similar mechanic to word games like Wordscapes while combining Inman’s classic drawing style and the weaponization of kittens.

Inman had always intended on the game being multiplayer-only, but the tutorial took on a life of its own.

“I started drawing this tutorial on how to play, and then the tutorial became that single-player mode, where you have this neighbor that moves in and tells the whole story about him,” Inman told The Verge. “I got in too deep... and I ended up writing like 12 chapters. But it became my favorite part of the whole thing.”

Real fun, no strings or yarn attached — The game allows you to tap into the multiplayer joy of Exploding Kittens from a safe distance. While there are many simulators available for various tabletop games, sometimes, it's just not the same. Kitty Letter takes from beloved properties from The Before Times in order to create something new that can connect you with your loved ones.

Most importantly, the game is free. Like, really free without annoying ads. Sure, there are some in-app purchases for cosmetic add-ons in multiplayer mode, but you don’t need them to experience the game in full. A blog post announcing the game’s launch gives you the best sense of the gameplay and Inman's feeling about in-game purchases:

I hate free-to-play games. I hate games built entirely around player retention and tricking people into keeping the app open as long as possible. I hate coins, currencies, chests, and other money-printing schemes disguised as fun. For Kitty Letter, I tried to just make the game as enjoyable as possible. This means that sometimes the chapters are long and almost seem to be discouraging you from playing. There’s an entire chapter built around slapping a trout in order to defrost it, and some musical deer that make sexy groans for way too long. I tried to just build a short-lived, likeable game, rather than a medicore game stretched across months of free-to-play garbage mechanics. Fuck retention. Fuck in-game currencies. Embrace the trout, I say. Embrace the groaning deer.