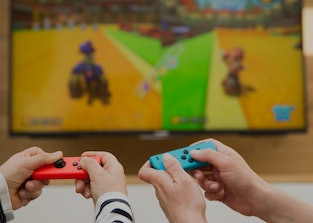 How many users Nintendo Switch Online now has.

In what is surely the most shocking gaming news of the year, Nintendo announced that it’s making a lot of money off the Switch. In fact, the company recently said as part of its "corporate management briefing" that its Nintendo Switch Online service has notched 32 million users, which is an increase of 6 million from September 2020.

In the same presentation, the company also said that the install base of Switch owners is now sitting at 92.87 million units. That's a lot of Marios. However, there was no word on the number of subscribers for the new "Expansion Pack" tier, which was introduced just a few weeks ago. That upgraded service includes Nintendo 64 and Sega Genesis games, and it's generated quite a bit of controversy for Nintendo on social media.

Fuzzy math — While we here at Input felt that the concept of the Expansion Pack was a bad deal on its face due to its high price and small library of games, it's only become more unpopular online now that people have actually gotten their hands on it. It seems that the quality of the N64 emulation is quite poor even by Nintendo's usual standards. That isn't surprising, given that N64 emulation can be quite taxing — but a lot of users have taken to social media to complain about it.

In the briefing, Nintendo said that it will continue to improve its Nintendo Switch Online service, as well as the Expansion Pack, but gave no word on what these improvements might be. In the meantime, the trailer announcing the Expansion Pack service has become the company's most-disliked video ever, almost doubling the ill-fated Metroid Prime: Federation Force announcement trailer from back in 2015.

Keep the engine running — Given Nintendo's track record when it comes to emulation projects like this, it's unlikely that the quality of the retro experience will get much better on Switch, at least without a serious hardware revision. Even still, some data mining suggests that dozens more games are coming to the Expansion Pack in the future, which at least means that you won't get bored and try to play WinBack in 2021. We assure you, it's not worth your time or effort.