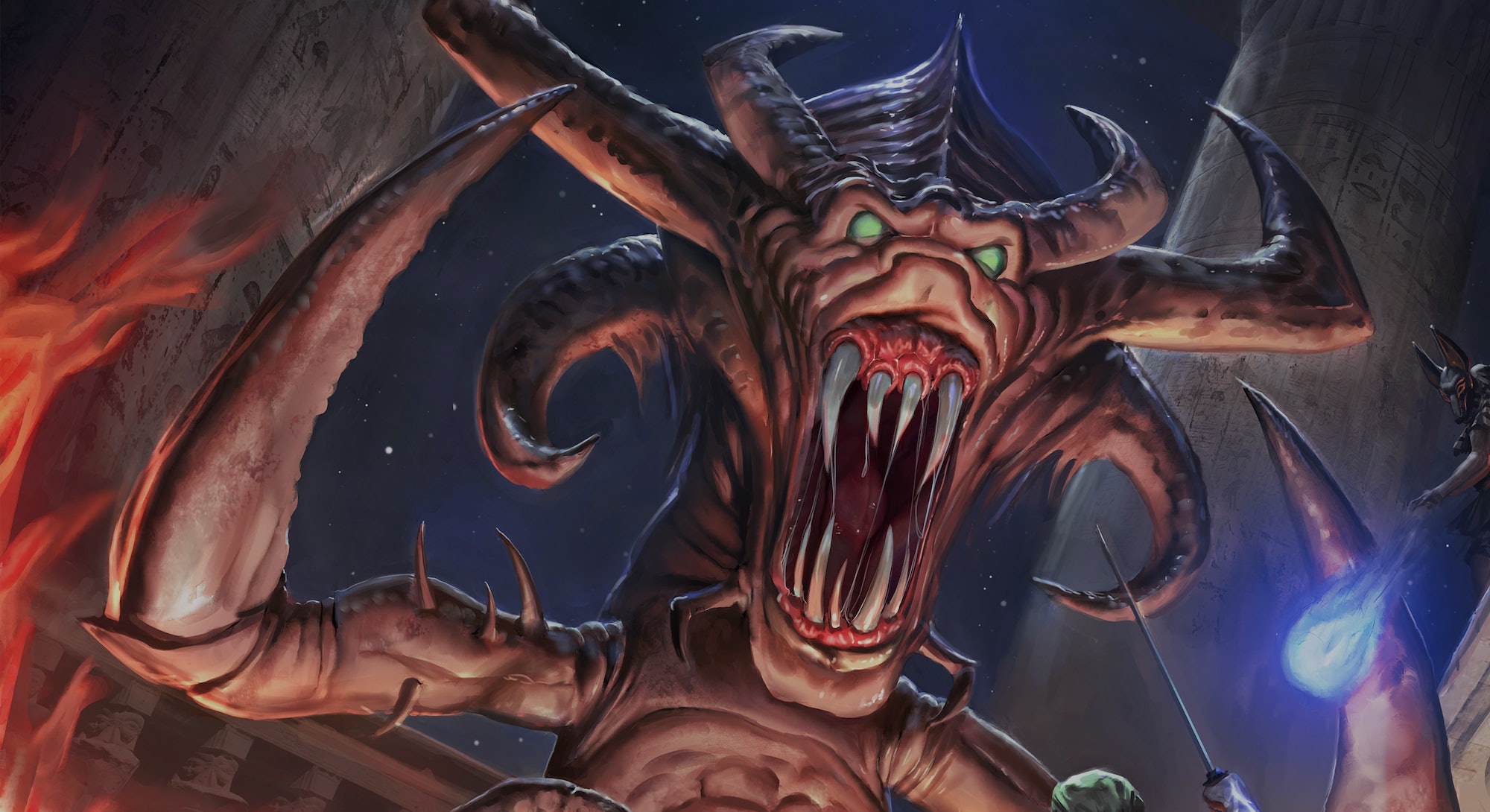 By any definition, it's a miracle that you can play Powerslave Exhumed on a modern PC at all. Whether you'd want to in the first place is a different matter entirely.

Let's rewind a little. Powerslave Exhumed is a remaster of the Sega Saturn / Sony PlayStation console versions of the old-ass first-person shooter Powerslave, which is not to be confused with the DOS / PC game that came out around the same time. While the versions share the same name, they are actually very different games.

This was a pretty common phenomenon back in the day, when developers had to tailor each version of a multi-platform release to suit the strengths and limitations of each console. (The 16-bit Shadowrun games are a notable example.) In fact, the Saturn and PlayStation versions of the game differ considerably as well; Exhumed falls closest to the Saturn version.

Among a certain breed of classic first-person shooter fans, the console version of Powerslave has a reputation as a cult gem: a forgotten non-linear shooter with light Metroid-y elements, similar to its more popular contemporary Hexen. Now that Nightdive Studios has done the necessary work to bring it back from the dead — as they did for the far superior Blood before it — a new generation of players can finally see what the old heads were talking about, and reply "yes, that statement is technically true."

Thanks to neoclassical examples like Dusk, Amid Evil, and Ultrakill, we're now living in a second golden age for first-person shooters in the classic style, which are sometimes called "boomer shooters" by enthusiasts. (No, I don't like the term either.) Without the explosion of interest in boomer shooters, I doubt Powerslave Exhumed would even exist.

As a lifelong fan of the original FPS classics like Doom, Quake and Heretic, I appreciate the work that fans and developers have put into crafting ways for mostly-forgotten games like Blood and Shadow Warrior to work on modern computers. However, while Blood is an all-time great that deserves your attention, Powerslave (mostly) feels straight out of 1996.

Developed by one-and-done studio Lobotomy Software, Powerslave is best described with the dubious term that '90s writers used to describe every FPS game: "Doom clone." As a lone commando sent to wipe out reams of monsters terrorizing the ancient Egyptian city of Karnak, you'll blast your way through hopping spiders, snake-chucking mummies, and fireball-spewing dragons on your way to saving the world. You'll also run out of ammo a lot, especially on the higher difficulties.

Look, I don't want to be unfair to Powerslave. The poor game was harmlessly sleeping in closets and dusty basements around the world, and Nightdive rudely interrupted that slumber in order to hoist it up as a classic game worthy of modern attention. It seems almost cruel to list its many flaws, particularly because it shares the vast majority of them with the other also-ran shooters of the late '90s. The first two hours of the game are a slog: you have basically one weapon that deals any significant damage — your trusty machine-gun — and none of the generic monsters that the game throws at you are even remotely a challenge. (Like its predecessor Doom, your starting pistol is useless after the first level or so.)

Past about the halfway point, the pace picks up significantly, but Powerslave's shortcomings really start to reveal themselves. True to its '90s roots, there is a lot of annoying first-person platforming in this game throughout, and you eventually get a glide skill that's the least-satisfying jump I've encountered in a video game in a long time. (I eventually switched to a controller for these sections, and it works a lot better.)

Besides the frequent death pits, there's also a panoply of fireballs and bouncing bombs which kill you in one or two hits. Most of these are fairly easy to avoid, but the bombs have a way of arcing randomly in your direction when you least expect it. And unlike most other classic FPS games, Powerslave doesn't have a quicksave option, which means it's back to your last checkpoint every time you mistime a glide over a lava span.

Like a lot of classic shooters, Powerslave's enemy designs leave a lot to be desired. More than half of the foes you encounter in the game are the sort of small, fast-moving targets that are more irritating than threatening, and the other bad guys take their sweet time to show up. Additionally, your character model is a lot larger than the likes of Doom and Duke Nukem 3D, which makes avoiding projectiles difficult in close quarters. I'd also like to give a special mention to the mummies you fight later in the game, because the homing snakes they throw reminded me just how much I dislike Doom's revenants.

While it's definitely true that Powerslave's Metroid-inspired elements do help it stand out, it ultimately doesn't add that much to the experience. Compared to Hexen, the amount of backtracking and puzzle-solving is fairly minimal, and I rarely had to explore for long to find the path forward. Like any good metroidvania, there are a few collectables hidden in hard-to-reach areas, but they're fairly easy to locate if you're paying attention.

Still, when you put it next to its old-school contemporaries, Powerslave's design just comes off as retrograde. The fact that every resource drop in the game is random (from either breaking jars or killing enemies) means that you will often find yourself running out of ammo at the higher difficulties simply because you got unlucky. (Also, the jars spew out projectiles sometimes, so you have to waste ammo shooting them from afar.) Speaking of difficulty settings, they're kind of a mess — while Normal is way too easy for an experienced player, Hard is barely more of a challenge, but the top setting Pharoah is so obnoxious that it's almost unplayable in parts.

As a whole, while I'm glad that fans can finally relive their domination of Egypt once more, it's hard to recommend Powerslave Exhumed to anyone other than the most die-hard old-school FPS fan. If you're willing to brave its many rough edges, there's some interesting stuff here. But considering that there are so many excellent boomer shooters out there these days, most of us will probably be better served by booting up one of the many games Powerslave inspired rather than the genuine article. If you truly desire some old-school action, we recommend Blood (through the nBlood or BloodGDX source ports, not the Steam version) or Hedon: Bloodrite. Some things are best left buried, unfortunately.

An old-school FPS in the style of 'Hexen.'