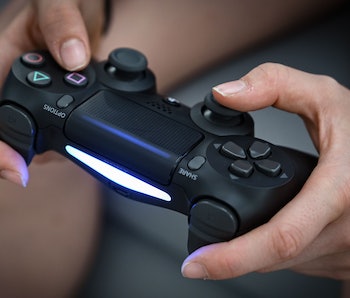 We've reached the point in the coronavirus lockdowns when people are truly starting to lose their minds. Case in point, someone on Reddit made a "portable" PS4 gaming rig so they can take their console with them into any room with ease.

Free yourself – The rig uses a 3D-printed case to hold the console together with a DIY television – it's a 13.3-inch 1080p display, plus a controller board with an HDMI port so the screen can connect to the console. You could just buy a ready-made TV to put in this thing if you don't feel like going to the trouble.

There's also a compartment for the PS4 power brick, and even a convenient carrying handle.

This is what the rear of this beast looks like (it's a little less, umm, attractive, but then, you'll be too busy staring at the front of it to care):

There are so many possibilities with this rig. You could game in the bathroom, or leave the bedroom at night when your significant other is getting annoyed with you fragging noobs on the bedroom TV. It's freedom from the oppression of stationary entertainment centers without having to go full Nintendo.

In response to lots of comments, the creator of the rig claims that no, it doesn't ever overheat. That makes sense because with this setup every side of the PS4 is exposed to air except the sides, which are just plastic. Most people shove their console into cramped areas of their entertainment stand anyway, so this might even be better.

The PlayStation... Switch? – Of course, the PS4 needs constant power, so you'll always need it plugged into a wall outlet. And the PS4 Slim weighs nearly 5 pounds by itself, whereas the Nintendo Switch weighs less than a pound, meaning this self-proclaimed "portable PS4" isn't really portable. If you genuinely want to play your PS4 on the go, however, you could go all-in and buy a portable generator like the Anker Powerhouse 120000. That would be crazy, but we'd respect you for it.

The last thing that would make this setup perfect is if the controller was split in half and clipped to the sides of the case. Then you'd have a really powerful PlayStation... Switch. That'd be a lot more useful than the dual-screened Game Boy Advance SP that someone else made. That was genuinely mad.

There's a full explanation of the rig and instructions for printing the case over on Reddit in case you need your own isolation insanity project.