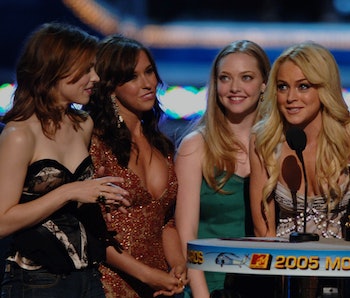 Many unusual titles have been greenlit by the video game industry, but every once in a while we come across a failed project that just hits us like a ton of bricks. Such is the case with the Mean Girls game for the Nintendo DS — a tie-in to the cult classic comedy of the same name. Yes, there was meant to be a DS game set in the Mean Girls cinematic universe. We’re just as surprised as you are about this revelation.

The Mean Girls game isn’t a secret, exactly; Paramount Pictures announced its production way back in 2008, along with games for other popular titles like Clueless and Pretty in Pink. The contents of the game are less public, though, because it was eventually canceled. Not officially canceled, even; the release just never happened, and it ended up disappearing into the gaming abyss.

Little has ever been revealed about the game, save for the fact that Lindsay Lohan wasn’t included on the cover — either because of a money dispute or Lohan’s reputation, no one’s really sure. Now we’re finally being given a glimpse into the Mean Girls DS game, thanks to YouTuber Raven Simone (aka Bobdunga).

Raven’s investigation is impressively thorough. She begins hot on the trail of the Mean Girls DS game — which she isn’t able to locate by the documentary’s end — and ends up following a twisted trail through the Clueless fashion game. Raven expressed her disappointment at not being able to find that coveted Mean Girls ROM in her investigation… but she did actually come across it after the fact.

Okay, maybe it’s fine we never played it — After months and months of dead ends, an anonymous team member who worked on the Mean Girls DS game reached out to Raven about her video and volunteered a copy of the lost game. Raven then worked with a programmer by the name of “TOMYSSHADOW” to debug and patch the game. It had never been fully primed for release and that definitely showed; Raven says an infinite loop error showed up at random points throughout the game and various other crashes and save progress issues.

But against all odds, Raven was able to finish the game with a 97 percent completion rate. All told, it’s probably okay the Mean Girls DS game was never released; it is, as rumored, mostly just a series of basic puzzle games with a bare-bones Mean Girls theme.

Okay, so it’s not groundbreaking, but we’re still nostalgic and a little jealous anyway. Maybe someday it’ll come to the Switch. Stranger things have happened, right?