Valve gets salty over the lack of controller support across Steam 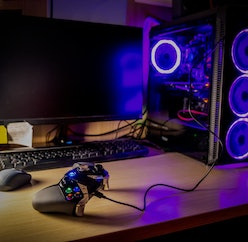 Valve is calling out developers who are too lazy to incorporate gamepad support in PC games. The company behind the Steam platform has released new numbers indicating that gamers increasingly opt to use gamepads over keyboards, with 48 million players having used a gamepad in a Steam game, and overall 10 percent of daily sessions being played with them.

Gamepad warriors rise up — Traditionally, keyboards were thought of as providing a competitive advantage over gamepads because they can offer better precision and speed. And to that end, Valve says that less than eight percent of first-person shooters are played using a controller. Aiming at a small point is just going to be a faster way to hit a target.

But for other games, performance really comes down to skill more than anything. As for the sports and fighting genres, more than 70 percent of game sessions are played using a controller.

"The usefulness of this reporting may depend on the kind of game you are making," writes the company. "But, in general, a lot of players like to play a large cross-section of games on Steam with a controller — which is something many people, including those of us at Valve, find a bit surprising."

Controllers from the likes of Microsoft or Sony are preferable to many not just for their ease of use, but also for their ergonomics. And they lend themselves to couch-based play; it's kind of difficult to use a keyboard there.

It's not hard — For games that have been designed with consoles in mind, APIs are available to easily port gamepad controls over to the PC version. Valve recently added support for the PS5 DualSense to its Steam Input API, for instance, and Microsoft has a similar API for porting Xbox games to desktop. There's really no good reason to not have gamepad support, and yet some still don't.