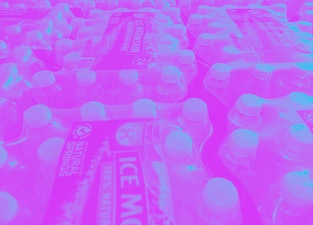 How much the customer paid for the nonexistent PS5.

A woman in Japan purchased a PS5 earlier this year for 65,000 yen ($596), only to open the box upon arrival and find two bottles of water inside. The woman was unable to reach the seller, a 41-year old woman from Shinga, Japan, and contacted the police. Shortly thereafter the seller was arrested on charges of fraud.

The incident was reported by Japanese news outlet FNN.

Messed up — The suspect denied the charges to police saying, “I shipped the package but I don’t remember what I put in.” Sounds totally legit that the suspect was impossible to reach and then once police found her, didn’t remember what she put in packages that she mailed out. Apparently, the order was cash on delivery, meaning the seller might have been arrested without ever even receiving the money. Cash on delivery isn’t popular in the United States but just means customers pay when an item arrives at their doorstep, rather than before.

The story sounds funny, but honestly, it’s pretty messed up to play with someone’s feelings (and money) like that. The PlayStation 5 remains in scarce supply due to global GPU shortages. The victim was probably really excited to get the console she paid a premium for — it might have been for herself, or a gift. The suspect, if she really did intentionally mail water, was exploiting the extreme demand.

Crime and punishment — Japan has a conviction rate over 90 percent, so it seems pretty bold to try and pull a scam like this. Maybe her punishment should be completing all the Dark Souls games?

Let this be a warning: be very careful when buying in-demand consoles from unauthorized sellers.