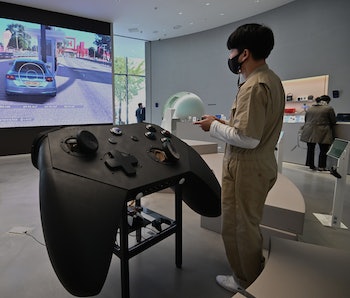 Not too long ago Input reported that Xbox had the potential to become the Netflix of gaming, noting that xCloud's compatibility with Android devices put it a cut above competitors. Keeping that theme of compatibility in mind, executive vice president of gaming at Microsoft, Phil Spencer, has strongly hinted at the possibility of Xbox launching on smart TVs. In an interview with The Verge, Spencer said, "I think you’re going to see that in the next 12 months. I don’t think anything is going to stop us from doing that."

Spencer added that a hardware change was likely to facilitate greater interoperability. "One of the primary things that people do on game consoles is watch video; they watch Netflix and Disney Plus and Hulu and everything else," Spencer said. "What it’s meant is we actually have to build out an app platform inside of a game console so that these providers can go and build their Spotify app and the different things that run. There’s real hours and hours of usage on these things, which — my N64 didn’t do that. The first Xbox didn’t do that."

So, Xbox going live on a smart TV is inevitable, more or less. But don't hold your breath. The company's previous attempts at cross-device play have been shaky, to say the least.

Remember 2016? — Four years ago, Microsoft attempted to launch a lightweight edition of Xbox streaming. At the time, the company had been experimenting with TV sticks, which weren't too different than what you see from Google's Chromecast or Roku devices. That Xbox TV stick, though, was canceled, which involved at least 300,000 units being recalled.

It was around that time that Microsoft also pulled back on its own iteration of an Alexa device alongside ending the sale for its fitness wearable accessory known as the Microsoft Band.

Believe it when it ships — This isn't to say that there's no chance that Xbox will reach smart TVs, but rather that there could be a last-minute cancellation. As Cyberpunk 2077 keeps reminding us, it's best not to count any gaming chickens until they've, umm, shipped.

Spencer sounds confident, though. And he's also dismissed any rumors about Microsoft phasing out local gaming hardware. It's all about a "hybrid" strategy, Spencer said, which combines the cloud and local hardware, giving gamers the best of both worlds.