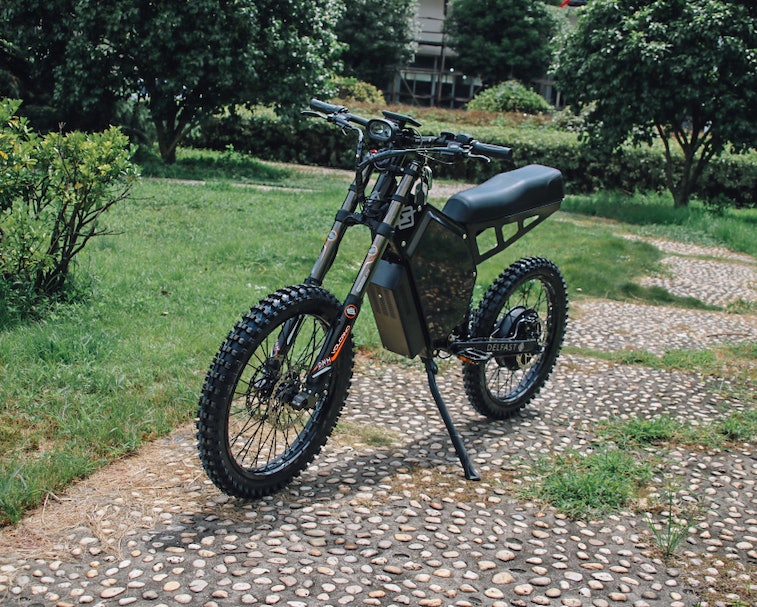 Delfast, the Ukrainian company behind the Top 2.0 electric bike that we featured in our apocalypse guide, is slashing the prices on a bunch of its last-gen units (including the Top 2.0) in an effort to focus on the current Top 3.0 model and future iterations in the Top series.

Then there’s the Delfast Cross Dirt, a bike that’s positioned against the Sur Ron, a bike that I’ve written a lot about and is now being sold under the Segway brand. Delfast’s Cross Dirt matches the Segway X260's 74-ish mile range and is marked down from $5,200 to $4,299, a savings of $901, which undercuts the $4,999 X260 by an appreciable margin. The sale is slated to last until the end of October.

All these prices look a little insane, it’s true, but it’s important to keep in mind that these ultra high-powered bikes can do a lot more than your average 250 watt mid-drive bike or even an electrified mountain bike. Both Delfast and Sur Ron use DNM Volcano forks that have a lot of travel. Using my regular full-suspension mountain bike after riding on the Volcanos feels like a big step back is what I’m saying. Plus, Delfast’s bikes have some of the most insane range I’ve ever seen — the Prime 2.0 set a world record for eeking out a mind-blowing 230 miles on a single charge.

Below you can see a quirky video featuring Delfast’s CEO Daniel Tonkopiy from the company’s HQ in Kyiv with news of the strategy change:

More like this
Jackson Chen
Sep. 17, 2022
Tech
Zero’s long-range e-motorcycle is a beast on and off the road
Will Gendron
Sep. 16, 2022
Design
Campworks's electric camper is an off-grid powerhouse
Maya Ernest
Sep. 14, 2022
Style
Merrell updates its Moab hiking shoe for stability and sustainability