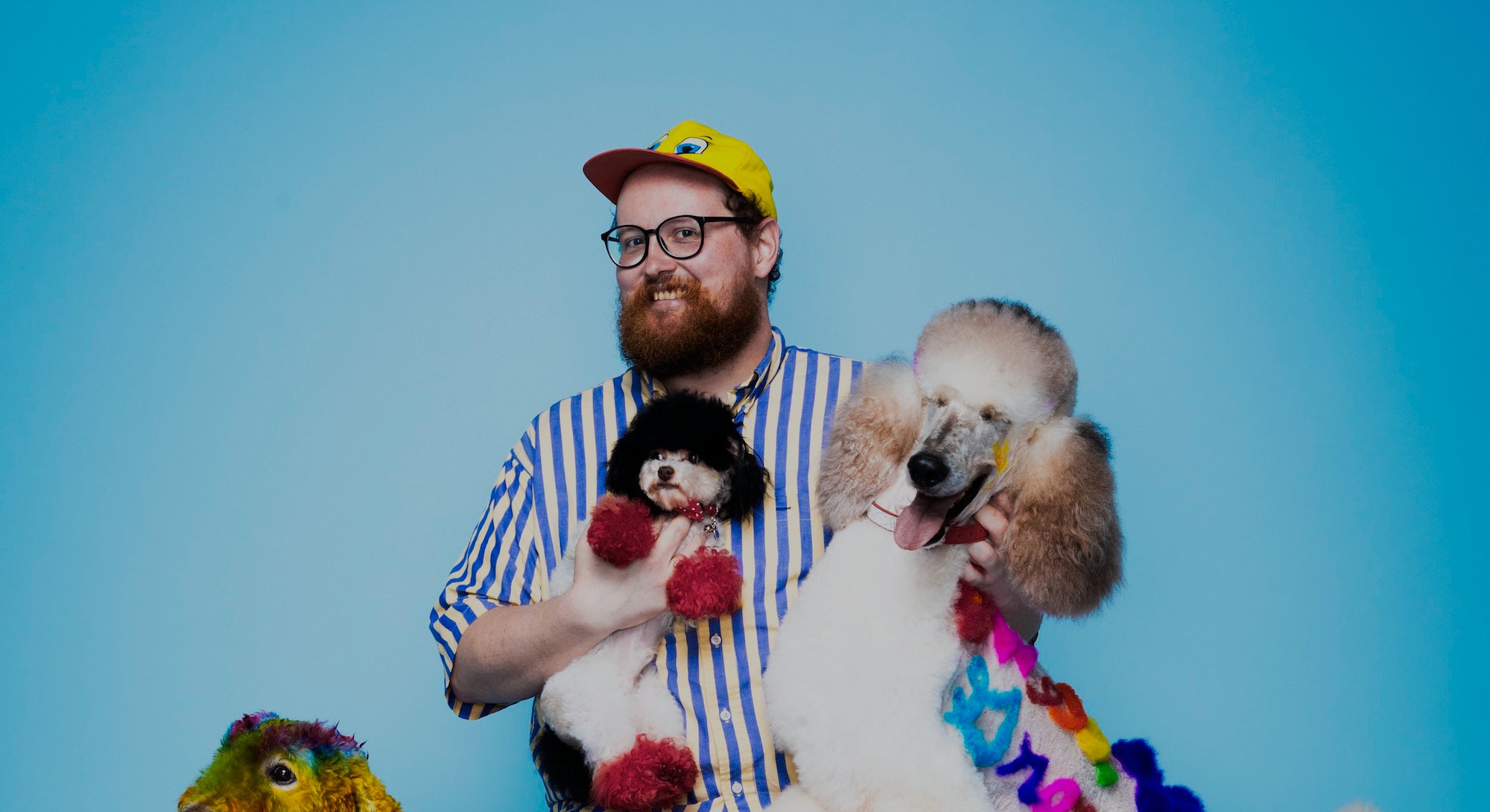 Dan Deacon, a renowned electronic musician whose albums have been described as “psychedelic” and “experimental” has lately been dabbling in original scores for documentaries.

He did the scores for Rat Film in 2017 and Time Trial in 2018, both films grappling with serious topics. Now Dan has a new score out for HBO’s Well Groomed, a documentary about competitive creative dog groomers. Like much of Dan’s work, the soundtrack tickles the senses with bright synths, elaborate arrangements, and an all-around positive attitude. It's a perfect fit for a film about the world’s most colorful dogs.

Mark Yarm, the producer of Input's short-form podcast Input/Output, and I had the chance to speak with Dan about the score of Well Groomed. Mark turned that conversation into a podcast that you can listen to below.

As our frequent readers know, I would never miss an opportunity to ask about gear, especially in the context of electronic music, which is notoriously gear-heavy. So I asked Dan about his first computer, his go-to music tools, and his favorite pair of sneakers (and speakers!) Below are his answers, lightly edited for clarity.

Evan: What was the first computer you made music with?

Dan: It was a sort of homemade Frankenstein. It was beige... I think that's the best way to describe the period of time it was from. It was my dad's work computer. My mom and dad owned a mom-and-pop exterminator company that was just the two of them. At some point in the early 90s, they got a computer from a family friend, like a guy who built PCs. It ran Windows 3.1 and some version of DOS, I can't remember which, but I remember learning some DOS commands, and it booted to its own home screen.

It was like “Welcome to the deacons Family Computer” and if you hit one it brought you to Windows. But for some reason it had this MIDI program called MIDISoft. And it was a lot like Microsoft Paint, except instead of it being a blank canvas, it was a blank sheet of notation paper. I just fell in love with that, just clicking notes in and seeing how many I could put in before the computer crashed. And I don't know, I think that was my first time really, I mean, I played [music already.] I was in seventh to ninth grade, I think sometime in that period. So I’d been playing music since I was in fourth grade. Playing the trombone wasn't like oh yeah, this is awesome. Yeah, I wasn’t going to shape my life around the trombone. I guess some people do, like professional trombonists, no shade to the trombonists, but it just didn't speak to me. But that was my first computer; a hack job made just for data entry. And for some reason it had a MIDI program on it, and that changed my entire life.

Evan: For the music on the documentary, what was your go-to synth or module?

Dan: I did the whole score in Ableton Live, and that's kind of where I do everything. This was the first time I really dove into the VST Soundtoys. I used Soundtoys quite a bit on [Well Groomed], and I don't think I would have been able to do it otherwise.

An analog mono-synth with a talent for bass, but a sound-engine that is versatile enough to kick out sharp leads and crisp arpeggios.

There's a lot of acoustic instrumentation on there, so when it came to the synthesis, I think I did most of it and most of my inputting on the Novation Bass Station II. And it's hard to get back into that headspace and remember from a couple years ago; it's always weird how late scores come out in comparison to when the music was written. But I think that would have been the period of time where I was using the Moog DFAM; the drummer-from-another-mother module. The Bass Station and the DFAM probably were where I did most of my sketching and writing for the synth parts.

Evan: Did you use a particular drum machine for the score?

The Korg Rhythm 55B is an analog drum machine released in 1982 that has 96 preset patterns; 32 Intro patterns, and 32 Fill-In patterns.

Dan: It's a modified Korg Rhythm 55B. I think it’s most famous for being Joe Jackson's go-to drum machine? I got that modified at a synth shop in Austin, Texas called Switched On. I didn't record with it, but it opens up a lot of portals for me in my brain.

Evan: I noticed some bookshelf speakers in a video you did, what were those?

No bumping here folks, this studio monitor has only the cleanest vibrations that money can buy.

Dan: I use the Adam A7 and the Yamaha HS7s as well. I like how flat they sound; they don't bump anything. I live in an old house in Baltimore, like a pre 1900s-style row home, or a brownstone as they would call them in New York. And so it's obviously not designed for acoustics, but I did minimal treatment in the room and I just like how they sound. I've had them for quite a while and I find them to be reliable.

Evan: Do you have any favorite music gadgets?

Additive, FM, phase-distortion, and wavefolding synthesis in one Eurorack module.

Dan: I guess it would be these two new synths. One would be the 4MS Ensemble Oscillator. I've been using that a lot and really enjoying it. It's a fun little synth and I just put it in one of the 4MS pods, which is just a little case that holds modular gear. And then another one is a large beast of a synth called the Buchla Command made by Buchla synthesizers. Those two synths have been really filling my brain lately.

Evan: Any other objects that are inspiring you recently?

Never let your elbow hang off your desk again.

Dan: I have this absurd little desk thing that I'm obsessed with. I switched to all wired equipment, like a wired mouse and a wired keyboard. I didn't realize how much of my arm just hangs off my desk, so I got this arm extender. I'm really showing that I'm 39 years old — I got these New Balances and I got an elbow rest from my desk.

Evan: What shoes are you rocking?

The classic comfy shoe for just living your life, man.

Dan: I only wear one pair of shoes and I buy like eight pairs of them. I bought these years ago and they're just some like crappy New Balances. I went in and was like: what are the best shoes for fat men? And these came up and I was like these, these are mine for the rest of my life. They’re the New Balance Men's NW 928V2s. They're the most popular, you know, among like, divorced dads.

Any other fashion pieces particularly speaking to you these days?

This hat can be anything you want it to be.

Dan: I really liked this hat that I've been wearing? It's called the Icolor Sun Cap, and it's got a back cover and a face cover that you can take on and off and a really long chinstrap. My favorite part about it is that it has this really long brim that just looks peculiar. And I don't know, I have the light blue one and I just love this hat.