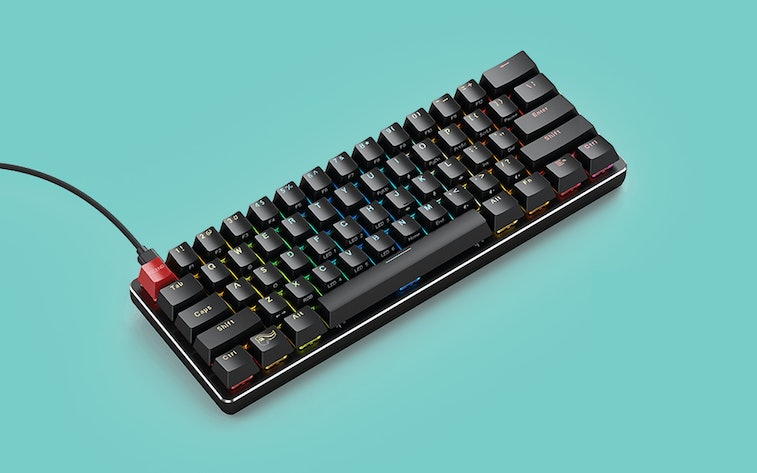 No matter what you’re doing, your keyboard is the most direct interface you have with your computer. It’s a line to communicate with the complex mass of code and silicon sitting in front of you in a language it understands.

But a good board will make your entire computing experience better, whether you’re working from home or just communicating with friends. That said, there are some activities that really benefit from a great keyboard, and gaming is one of them.

Face it, you need a good keyboard.

I’ve recently been playing a lot of Halo: MCC and, before the recent server troubles, Titanfall 2 ⁠— both pretty demanding games. With both of these I’ve found myself needing a board that’s fast, consistent, and intuitive to use.

In the past I’ve used keyboards ranging from Leopold, Varmilo, and any of the usual gaming brands’ pre-built boards to custom-made and programmed keyboards built from the PCB up. Through all of that, I’ve found that a good keyboard lets you tailor your setup to exactly your needs. It will feel natural and intuitive to play on, creating one less roadblock between you and the game. Alongside that, the feeling of a smooth keypress, the utility of a custom-programmed function or even just the satisfaction of a rattle-free spacebar can make a chill gaming session after a long day feel absolutely fantastic.

In appreciation of that, here’s a look at some of the best mechanical keyboards currently on the market:

If you play a wide variety of games, then a 60% board is probably best for you. They’re small and customizable, giving you almost everything while still leaving you with a lot of desk space.

The best all-around board you get today. Get it fully built out, or as a bareones model to outfit yourself.

KBDFans’ Tofu60 board has everything you need in a compact board: A full metal case, hot-swap sockets to change out switches, standardized assembly and screw positions to swap out the case and stabilizers, full programmability, and a dozen color options. All of this makes it a perfect board to both type on and tinker with. The board can also be bought without switches or keycaps if you want to bring your own. While you may need to tune the stabilizers a bit to get rid of some rattle or install some silencing foam, this board pretty much has everything you could need.

A great keyboard that you can customize to your heart's content.

If the Tofu60 is a bit expensive, another hot-swap 60% option is the GMMK Compact. While it has fewer color options and a case that can’t be replaced, it’s about ⅓ the price and still fully programmable. Along with that, its barebones option is cheap enough that a full board only costs ~$100 if you toss in a set of gateron switches and blank PBT keycaps.

If you play competitive shooters or racing games, you’ve probably heard a bit about “optical” switches, a relatively-expensive option that’s faster and more customizable than a standard mechanical switch. Most optical boards boast a 1000hz response time (compared to a standard board’s 125hz), a high actuation point, and a long-lasting “contactless” switch. Youtuber 2kliksphilip demonstrated some uses for an optical board in Counter Strike, and Linus Tech Tips discussed the pros and cons of optical boards in their reviews of three different boards.

A highly customizable board with very fast response times.

This board has one real advantage over other optical boards: Customization. Primarily, the board’s switches have adjustable actuation points, so you can easily change where in your keypress the switch sends a signal to the computer. Along with this, keys can be adjusted to have different outputs at different distances like, for example, a lowercase “r” at the halfway point and an uppercase “R” on bottom-out. The board also has hot-swap sockets, but those only work with Wooting’s linear and clicky switches.

In addition to this, the board’s response time is advertised at 1000hz. While that’s not quite as impressive as the Corsair K100’s (honestly overkill) 4000hz, it does match industry standards for most gaming mice, and is much higher than the average mechanical board’s 125hz.

If you play MMOs and RPGs, you probably need a number pad. Or hey, maybe you’re an accountant who also needs to slam some digits. Here’s the deal: There are boards with numpads and external numpads that you can plug in. Both are good options. (But quick warning, there are quite a few separate numpads that don’t actually type numpad numbers — they’re just programmed to the number row keys, which would prevent you from mapping separate in-game actions to the number row and numpad).

1800 boards are effectively compact full-sized keyboards, and this one brings optical performance along with per-key lighting.

An 1800-style board, the Shift is a relatively compact board with a numpad, arrow keys, and a function row. In my opinion, it’s the perfect layout for a larger board. And on top of that, this board is hot-swappable and has a barebones option, meaning you can pick out your own switches and keycaps. It pretty much does everything you numpad-users could need and everything I, a keyboard enthusiast with no strong opinions on numpads, would look for in a budget board.

For when you just need a numpad, and a good one at that.

If you just want a numpad, there’s the GK21s from KPRepublic. It’s hot-swappable, programmable and, well, it works. It’s a solo numpad. There’s not much to say about it besides that.

Where to go from here

The actual keyboard is only one part of the equation: Switches and keycaps are just as important.

Just to get it out of the way, your switch choice is mostly down to preference. The old idea that “linears are best for gaming, clickys and tactiles are best for typing” isn’t necessarily true, in my experience — the main problem with clickys or tactile switches in gaming is hysteresis, which Mechtype discusses in their switch guide. I used to game exclusively on MX Blues and my current board for writing has linear switches. What I really recommend is testing out different switches before you buy any so you can get a feel for what you enjoy most. But as a starting point, here are some great entry-level switches:

Gateron Linears: A lot of gaming circles will say Cherry switches are the best, but that hasn't been my experience. Cherry’s offerings are alright and easy to find, but Gaterons are cheaper, just as reliable and, in my experience, smoother. I suggest starting with Gateron Yellows if you want a good, cheap linear with a reasonable spring weight.

JWK switches: For a cheap and high-quality tactile switch, the Durock T1 switch is an easily-accessible, pre-lubed tactile manufactured by JWK. It has a more notable tactile bump than Gateron or Cherry, and will definitely have a smoother keypress than either as well.

Lubing your board: Earlier, I wrote a guide on how to properly lube your switches and tune your stabilizers, which is an easy and fairly cheap way to take any board from good to great.

PBT Keycaps: These feel good, don’t shine over time, and are fairly cheap compared to ABS keycaps from companies like GMK and Signature Plastics. While they don’t have super bright colors (the main benefit of ABS), they still look nice and are available in countless color schemes.