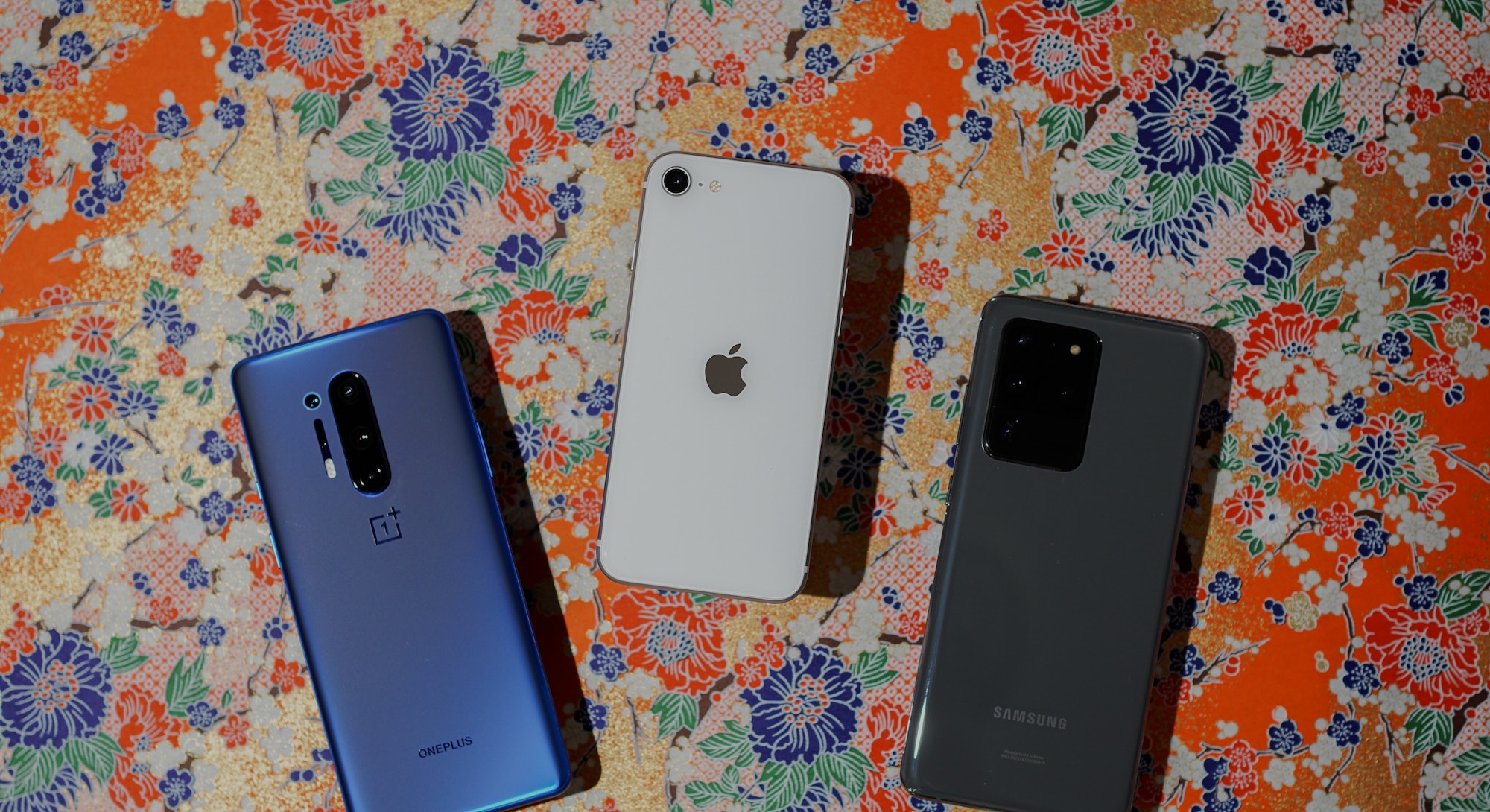 I can think of a bunch of reasons why the iPhone SE (2020) is disappointing. Apple is recycling an old design, the LCD screen is small, it has thick bezels, there’s no Face ID, and there’s only one rear camera when two or three are standard now.

But that ancient design.

I’m not disagreeing the iPhone SE is looking a bit dated compared to the all-display phones that cost more, but most people really don’t care if their phone has slim bezels or rounded corners. Especially if it means saving hundreds of dollars during these belt-tightening pandemic times.

The iPhone SE is more of a classic look than an old one. I think of the iPhone SE like this: if Porsche took an “old-looking” Porsche 911 from two years ago, put the newest and most powerful engine in it, and sold it at 43 percent less than its flagship 2020 model, would you not buy it? You’d be stupid not to buy this special edition Porsche if your dream was to own a Porsche.

That’s what the iPhone SE is: a classic design, turbo-charged on the inside, and very affordable. It's not a watered-down iPhone. It's an iPhone through and through, and it'll still be fast and getting software updates for years to come. No other Android phones at $399 even come close.

That’s what the iPhone SE looks like simply from looking and holding it. Classic glass front and glass back sandwiching an aluminum frame. I’ve been testing out the white version, which is purer white than the iPhone 8’s off-white. Switching from my iPhone 11 Pro, I was reminded of how much I miss small phones. I can reach from corner to corner with my thumb without shimmying the phone in my hand! It fits in my skinny jeans without looking silly. I dropped it on my face one night and it didn’t hurt as much as the huge OnePlus 8 Pro.

There will be people who judge a phone by its bezels, but like a TV or computer monitor, the outside matters less over time. At $399, you know the iPhone SE doesn’t have all the bells and whistles of an iPhone 11, and you’re okay with that. Just like we don’t expect a $400 TCL TV to be as thin or have the same vivid picture quality as $1,000 LG OLED TV with HDR.

If it ain’t broke

The features the iPhone SE has — they all work great. The 4.7-inch LCD screen (small by today’s standards) is still bright enough outdoors. Something I can’t say for many phones like the Moto G budget phones. It’s also got True Tone.

Sure, the screen is small next to 6-inch phones and the display isn’t OLED. But my 46-inch TV is only 1080p and not 4K and it’s also an LCD and not OLED; my growing Blu-ray collection still looks fine on it. The web or Instagram doesn't look unbearably worse because the iPhone SE's screen isn't as fancy.

Ditto for Touch ID. Same second-gen fingerprint reader Apple has been using for years. It’s fast to unlock and still doesn’t play very nicely wet fingers. I prefer Face ID and doing Animoji and Memoji FaceTime calls with my family has been a great way to stay connected and keep spirits up. But Touch ID is fine. It might even be better for a lot of people now that we’re all wearing face masks and Face ID doesn’t work with them on.

And same for IP67 water and dust-resistance, built-in wireless charging, fast charging support (though there’s no fast charger included in the box), and stereo speakers. Not even the OnePlus 8, which starts at $699, has an IP rating or wireless charging.

One thing I am upset about: there’s no Haptic Touch for lock screen notifications. Meaning you can’t long-press on a notification to get shortcuts. The iPhone 8 had 3D Touch, which supported rich notifications. For whatever reason, Apple chose not to include Haptic Touch for notifications. It's a very weird thing to leave out and Apple has yet to provide any good answer to why it doesn't work. Haptic Touch still works in other parts of iOS, like the Control Center and on app icons on the home screen.

The benchmark numbers don’t lie: Apple’s A13 Bionic chip is a beast and still far more powerful than Qualcomm’s latest Snapdragon 865 chip. This means the iPhone SE is faster — old design and all — than flagship Android phones like Samsung’s Galaxy S20 Ultra and the OnePlus 8 Pro which are powered by the 865 chip. Let me reiterate: a $399 phone is as powerful as the iPhone 11 and 11 Pro, which costs $699 and $999, respectively, and outperforms Samsung’s $1,399 S20 Ultra and OnePlus’s $899 OnePlus 8 Pro.

Budget phones usually come with last-gen or mid-range chips. Not the iPhone SE. It’s got flagship horsepower. Single-core and multi-core Geekbench 5 scores for anyone who’s a skeptic:

The only time I saw a dip in performance was for CPU-intensive tasks. Making adjustments, like cropping, skewing, rotating, and tweaking stuff like contrast, noise reduction, and highlights — in real-time in 4K — pushed the A13 Bionic chip harder. The same adjustments on the iPhone SE took on average 4-5 seconds longer compared to my iPhone 11 Pro. Similarly, exporting 4K videos in iMovie took a few seconds longer on the iPhone SE, too. This is not deal-breaking stuff when you consider the Android alternative — it sucks for editing video on the fly. It’s a complete non-starter.

The iPhone SE has an interesting camera system. It has the same 12-megapixel image sensor as the iPhone 8. But it doesn’t take iPhone 8-level photos. Picture quality falls somewhere between an iPhone XR and an iPhone 11/11 Pro.

The magic comes down to the tuning of the image signal processor and the magic from the A13 Bionic’s Neural Engine. Together, the software optimizes the sensor to produce images with better dynamic range and the machine learning from the Neural Engine make single-lens portrait mode photos possible.

Photos are impressive to say the least. Like the processor, Apple didn’t scrimp on the camera. These are still the A+ cameras you’d expect from an iPhone.

There are a few things that Apple conveniently omitted from the iPhone SE camera that still make the iPhone 11 and 11 Pro superior. First, there’s no Deep Fusion aka “sweater mode.” As always, I used Metapho to confirm the iPhone 11 Pro photo was indeed “deeply fused.”

Now, let's see if Deep Fusion really did anything. Uh... not really. There are areas in the SE photo that look sharper like the "feet" text but some parts in the 11 Pro that clearly have better clarity and dynamic range.

The iPhone SE camera also doesn’t have a Night mode. It’s a mystery why the mode doesn’t exist since Night mode leverages the A13 Bionic’s Neural Engine to essentially take a long exposure and apply AI to brighten the image. If this is important to you, the iPhone SE camera isn’t going to cut it.

Night mode is a must-have camera feature for me, but if you don't take a lot of photos in low-light situations, you won't miss it.

The most shocking camera feature is portrait mode for the front and back camera using a single lens. Unlike iPhones with two or three rear cameras that generate a depth map to isolate the foreground from the background (and then blur it), Apple is using "monocular depth estimation," a machine learning-based technique to produce portrait photos. It’s kind of like how the Pixel phones do portrait mode.

And they look pretty good. The iPhone 11 Pro has the edge, but unless you’re pixel peeping, you probably wouldn’t spot the differences at a glance. The iPhone SE’s ML-based portrait mode don’t look fake like they do on the Pixel, either. Whereas the Pixel’s blurred “depth of field” background looks like a gaussian blur filter effect ripped from Photoshop, Apple confirmed to me the iPhone SE models the bokeh off a real camera lens. This is a detail you notice when you edit the background blur.

Again, the differences are in the details. Both are solid. Neither is perfect, but you can see the iPhone 11 Pro is better at separating my shoulders from the background. Nobody will care when you post a shot like this to Instagram.

The differences are more apparent when using the other portrait lighting effects like stage light and high-key light mono. For the latter (below), you can see the iPhone SE does a better job exposing my mask and T-shirt for highlights, but gets tripped up removing the background.

Hitting Android where it hurts

When literally everyone has a smartphone, there are only two directions Apple can go with the iPhone: even more expensive or even cheaper. With the iPhone X, Apple pushed north of $1,000; the most expensive iPhone 11 Pro (512GB) costs $1,449. If you’re already paying $1,000+ for an iPhone, Apple already won you over.

But a $399 iPhone? There are a ton of Android users Apple can convert at the $500 and under level. This is where Android phones are competing fiercely to best one another with diminishing returns.

I’ve used and reviewed countless Android phones priced below $500 over the years and they’re all the same: they don’t last. Their mid-range processors slow down real fast after a year or two. Their cameras take lackluster photos and videos. And the software rarely gets updated. The new iPhone SE is a pragmatic mashup between old and new. A cutting-edge engine wrapped in a classic body.

I suspect a great many people who are green bubbles will be delighted they can become blue bubbles without needing to break the bank. Because in the real world, your friends and family don't care about your phone's bezels, only whether you're a blue bubble or not.