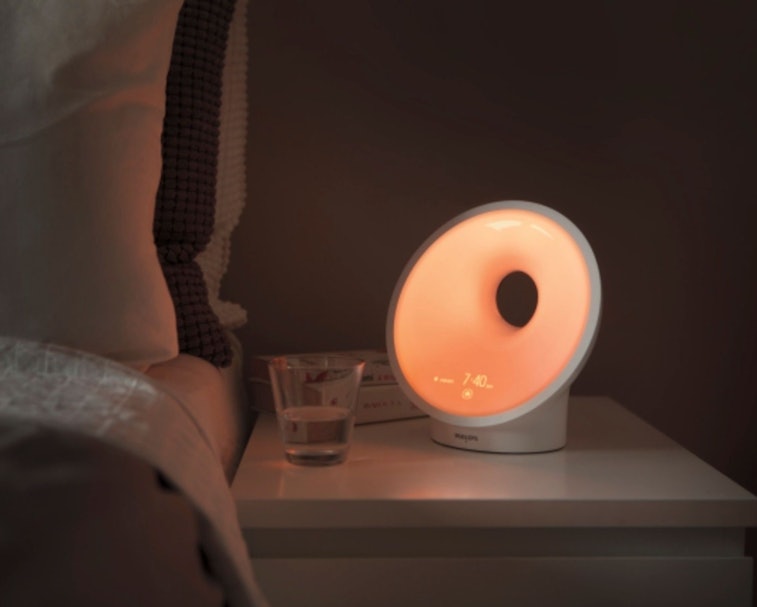 I am not a morning person — never have been, and never will be. Yet during the past two years, I began valuing sleep more than before, most likely because it served as the one time of day I could go without hearing something devastating. I invested in essential oils, a humidifier, and a Casper pillow, all of which helped me sleep better, but didn’t alleviate the struggle of getting up.

I have a bad habit (see: lifestyle) of staying up late, and while I could rearrange my schedule to aid my sleep, capitalism always seems to be the most convenient option. I sought to replace the jarring iPhone alarm that woke me up every day, which left me irritated and groggy. I strongly believe that anyone who brands themselves as a morning person does not wake up to that sound.

So, what do those people use? Are they being serenaded awake, or do they open their eyes to a platter of fresh fruit and cinnamon rolls? According to TikTok, they use the Philips SmartSleep Wake-Up Light Therapy Lamp, a sunrise-simulating alarm clock shaped like an uneven donut. Intrigued, I decided to order one — and after acquiring one discounted from its retail price of $200, I thought: This better work.

A sunrise-simulating alarm clock that helps your body naturally wake up.

With its large display, the Philips SmartSleep Wake-Up Light Therapy Lamp mimics sunsets and sunrise, preparing your body to sleep and wake up. According to various studies, the rising sun triggers the production of cortisol as we’re gradually exposed to its natural light — and that serves as a natural indicator to shift from being asleep to awake. Alarm sounds on the SmartSleep Wake-Up Light like “Forest Birds,” “Ocean Waves,” and “Summer Lake” (supposedly) further encourage the biological clock to start ticking.

I already sleep with my curtains open to wake up to sunlight, but I was curious how my body would react to a simulated version. Upon receiving the SmartSleep Wake-Up Light, I arranged it on my nightstand — although at 11 inches wide, the clock took up most of the space available. Its funky design fit well with my decor, however, and I began to set it up via its accompanying app, called “SleepMapper.” Within the app, you can set your alarms, track your sleeping patterns, adjust the light intensity of the lamp, turn on breathing exercises, and most impressively, monitor the conditions of your bedroom — from sound to humidity. Most of these features can also be seen and adjusted on the clock itself, which boasts a stylish (and efficient) smart touch display.

In anticipation of the next morning’s sunrise, I tried out the sunset feature, which could be adjusted to your desired length of time and customized with different sounds and types of sunset. Having been in cold New York City, I opted for the “Island Red” sunset accompanied by the sound of ocean waves.

Prior to the SmartSleep Wake-Up Light, I never tried going to sleep with white noise in the background — but the gentle sound of waves, and the slowly dimming “sunset,” really helped me wind down. I felt encouraged to put my phone away as my bedroom grew darker, and soon enough I was asleep.

I awoke at eight in the morning to a brightening light and the sound of forest birds, something that made me feel like I was camping rather than waking up in a small, overpriced apartment. I felt more relaxed and refreshed, especially as I woke up to birds’ chirps rather than a sudden beeping. Still, I snoozed the alarm by easily tapping the top of the clock, and got up to the same sound and sunrise nine minutes later.

Here’s a sped-up example of how the alarm clock works.

Since the first night with the SmartSleep Wake-Up Light, I’ve found my mood is much more tolerable in the morning: I feel ready to start my day and be productive. I’ve adjusted the humidifier in my room to improve my sleep — at least, according to the app — and although I’m still staying up late, I find myself excited to wind down with the clock’s simulated sunset and sound. Occasionally, I’ll use the light’s other features like breathing exercises, too, which come in handy at times other than sunrise and sunset.

I’ve found my mood is much more tolerable in the morning.

The Philips SmartSleep Wake-Up Light Therapy Lamp is undoubtedly the most advanced clock I’ve ever owned, but it’s also the best (in my opinion). With a myriad of customizable features, the SmartSleep Wake-Up Light can really be tailored per person — and while I sleep alone, the clock can accommodate two people’s light and alarm preferences. The hardest part to swallow about the product is its $200 price, which I’m not sure was entirely worth it. But for me, it’s definitely worth getting up in the morning feeling refreshed, ready, and almost like a morning person.