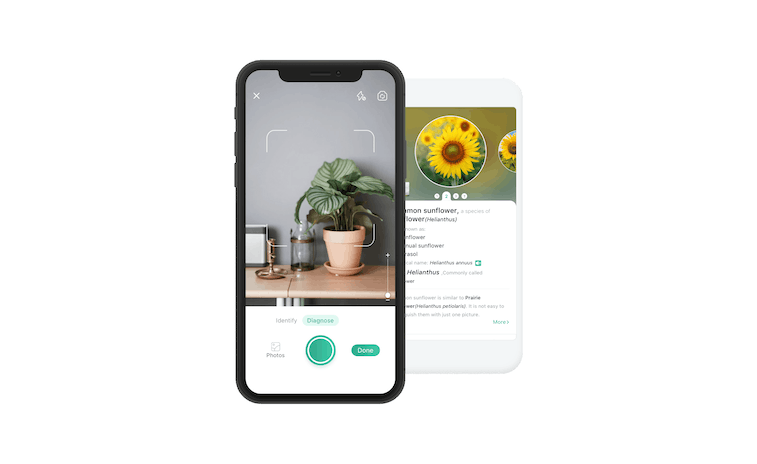 When it comes to plant care, you could describe my thumb as a mild yellow rather than green. I’ve mastered taking care of easier species like succulents and ivy, but am still prone to overwatering and failed propagation. Yet that hasn’t deterred me from accumulating a substantial cultivation — my bedroom alone is home to 11 plants — and I’m eager to grow my collection.

Sustaining so many plants at once has proven extremely satisfying, though it’s also led me to understand why they call growhouses nurseries — said plants have become my babies. And as a concerned parent, I trusted Google as a cheap diagnostic tool, lest a leaf starts drooping or changing color.

Googling your own symptoms infamously results in false fatal diagnoses, however, and the same notion seemed to apply to plants. I wasn’t getting the answers I so desperately needed; instead, I was supplied ads for fertilizer in between articles that informed me my plants were as good as gone. My mild yellow thumb was slowly shriveling into a black one before I stumbled across another ad for an app specifically created for plant care.

Called “PictureThis,” the app calls itself “a botanist in your pocket.” Through advanced artificial intelligence — and a picture of the plant in question — PictureThis claims the ability to identify over 27 million plants, tell you how to care for them all, and even diagnose unsightly problems. Other features, like chatting with botanist specialists about your plants, are also available should you choose to pay $30 for the premium version of the app.

Upon snapping a picture of one of my succulents, I received care instructions much more extensive than those shown on the tiny plastic tag that initially came with the plant. For starters, the plant was not quite a “jade plant” as its retail tag suggested, but rather a variation of the species called a “flaming katy.” PictureThis advised me to give the succulent full sun, a well-drained sandy soil, and fertilization once every half month during its growing season. I was also presented with its ideal growth temperatures, potting suggestions, pruning and propagating tips, and common pests.

Documenting the rest of my plants provided me with similar information, as well as the option to set customized watering schedules — ensuring overwatering and underwatering were practices of the past. And easy access to the encyclopedia-like documentation, housed in a folder titled “My Garden,” made caring for my plants synonymous with the phrase, “there’s an app for that.”

Think of PictureThis as the virtual version of “Plant Care for Dummies.” With the app’s extensive plant care knowledge and reminders, it’s virtually impossible to kill a plant unless you’re incapable of following simple directions.

A few months after downloading the app, my plants have grown impressively — even some I’ve owned for years prior — and I’ve started to use PictureThis for plants outside my home, too. When walking my dog through the fields surrounding my house, I was able to keep him from chewing on hairy vetch weeds, which the app identified as a species poisonous to pets. A less helpful poem about the weed was also provided.

So long as you have an interest in plants — whether that be growing, identifying, or farming them — PictureThis serves as a helpful guide. It’s led me to nourish my plants the way they deserve, while also justifying my endless plant purchases.

More like this
Mark Yarm
5.9.2022 11:00 PM
This Thing Rules
Missing your childhood haunts? Check out this retro T-shirt goldmine.
Annie Rauwerda
5.4.2022 9:08 PM
This Thing Rules
As a swimmer, the Shokz OpenSwim underwater headphones changed my life
Will Gendron
5.5.2022 10:35 PM
Gaming
'Genshin Impact' has been raking in a staggering amount of cash