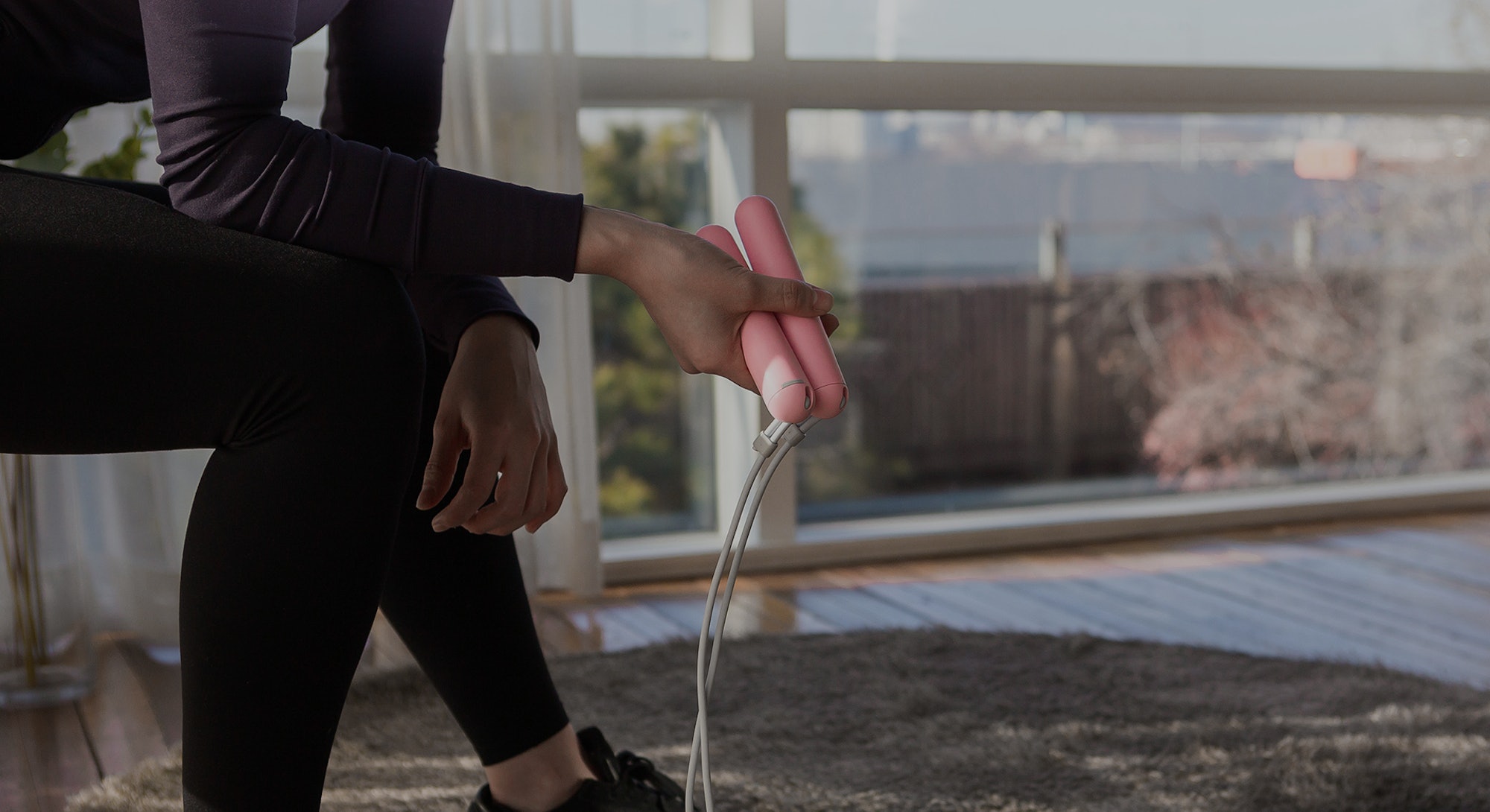 I am a huge sucker for gamification.

Each day, I walk around my neighborhood or pace around my house on phone calls to reach the daily step quota on my millennial health insurance app to get one Amazon dollar. Watching the circle on my app fill up with blue as I near my goal is incentive enough to get me off the couch most days. So when I saw there was a smart jump rope that effectively rewarded me with that same digital goal tracker, but with a better workout, I was intrigued to see if it had any real intelligence or it was yet another smart gadget con.

The jump rope, called the SmartRope Rookie, is one of three smart jump rope versions from product design company Tangram Factory. At $40, it’s the cheapest and doesn’t have any fancy flashing LED “mid-air” counter lights, which sounds like a lot for a casual workout anyway. The SmartRope Rookie has one job: to automatically quantify your jump rope experience. And it delivers on that promise.

The SmartRope Rookie has one job. And it delivers on that promise.

A cursory glance at Tangram’s website reveals a history of making “smart” products ranging from iPhone cases to remotes. The market is flooded with “smart” things these days, but I’m in the business of simplicity — get me something that is better, not more complicated, than its dumb counterpart. I don’t want gimmicks or push notifications or another bad habit that consumes my time. I don’t want to sacrifice my mental health or my privacy or my productivity. “You had one job” and you nailed it, effectively.

The smart part of the SmartRope Rookie is hidden in the handles — the magnetic sensors inside count your jumps, which are shown in the accompanying app for iOS or Android; data syncs with Apple Health and Google Fit, but there’s no Apple Watch or Wear OS support. Tangram says support for Samsung Health, Under Armour, and Xiaomi’s health apps are coming soon. There’s no power button — the SmartRope Rookie automatically turns on and starts counting when you start jumping. According to Tangram, the proprietary sensors can identify a full 360-degree revolution of the rope to give you accurate counting. The company claims their sensors are more accurate than the gyroscopes and accelerometers found in a lot of fitness wearables, which use the Earth’s gravity and changes in acceleration to track movements, respectively.

You’re effectively investing in an activity tracker that serves one purpose: counting jumps. And it nails this one job.

Alex Woo, the director at Tangram Factory, said that all of their team members had gym memberships they weren’t using, and they wanted to find an easy and efficient workout. “Enter the jump rope.”

He praised jumping rope as a cardio workout, one that can be done anywhere and in a short amount of time. Research and experts support that sentiment, and a study from 2013 found that 10 minutes of daily jump roping is equivalent to 30 minutes of daily jogging when it comes to cardiovascular health.

“We wanted to make the jump rope smarter and more immersive by infusing new technology and sophisticated design,” Woo said, also noting that they had seen an increase in demand since the pandemic “as people incorporate home fitness into their exercise routine.”

That, of course, is contingent on whether you have no downstairs neighbors, outdoor space, or are comfortable sweating it out in public spaces. But in a climate where the trendy home fitness equipment hits the three-digit mark, at minimum, a $40 jump rope that gives a great workout and some digital incentive is a more affordable (and space-saving) option.

So let’s talk about the SmartRope Rookie in execution. The Rookie lets you adjust the 3-meter-long rope to your height (I’m all of 5’ 2’’!) and simply turning the handle turns the device on and syncs it to the app. You hear a little chirp sound for confirmation. And then… you jump.

I haven’t jumped rope in more than a decade, probably. I counted my jumps to make sure it matched up with the jump count in my app. It was largely accurate — when I counted in the dozens, it was almost always within a margin of a few jumps. The app also tracks calories burned, time elapsed, and percentage to your daily goal, which set at 1,000 jumps by default, but you can adjust the daily goal count in your personal settings. The fitness data is estimated based on your inputted height and weight. There are also interval training sessions available, and a leaderboard to show how you rank. I was less interested in the latter, but if you’re especially competitive, there were thousands of users around the world on the board that you could remotely compete with.

Like my health insurance app, the SmartRope app also has a circle that shows the percentage toward my goal. And like I mentioned, gamification works on me. While in the early days of jumping I tired a lot more quickly, I was motivated to push myself a little harder to get closer to or meet the set daily goal. You don’t get any actual real-life rewards, but seeing “100%” on the app was a little dopamine rush. Also, when I was trying to count myself, it really took me out of the zone, or tripped me up (literally). Being able to trust that the sensors were accurately tracking my jumps let me zone out and listen to music while I exercised. And all it took was about 10 cumulative minutes. (I’m an amateur, I needed some breaks.) The handles were smooth and easy to grip, and there are two sets of metal alloy ball bearings in each for what Tangram hopes is a “smooth and effortless” jump. I can confirm that each jump was pretty smooth.

The rope itself isn’t made of braided cotton, but has a vinyl feel to it, which is the material used for speed ropes. You can go pretty fast with the Rookie. You’ll have to assemble the rope yourself by inserting it into the rope holders and adjusting to your height. I had a few instances where the rope itself needed to be smoothed out after it had been splayed out in my closet so that I didn’t trip on any kinks. To do that, I just pressed my foot down on the rope and pulled the handles up. It rarely got knotted or twisted. I haven’t noticed any wear on the rope itself, but you can buy a replacement Rookie kit for five bucks, which doesn’t include the handles (or, the tech).

When you’re done, you just put the rope away (remember, there’s no power button). The SmartRope Rookie is powered by a coin-cell battery, which should last up to three months with normal usage, so you also don’t have to plug anything in to power up; get a SmartRope Pure ($60) if you want a rechargeable battery (micro USB and not USB-C, though). When you need a replacement, you can buy CR2032 coin-cell batteries online, and they cost around five bucks for a four-pack. The batteries slide into one of the handles — you don’t need any tools, you just press down on the sides at the tip of the handle to lift the center out where the battery goes.

Way cheaper than a Peloton

I like my SmartRope Rookie. I can exercise outside without having to hit a vapor-infested gym or figure out a stylish way to incorporate a metal piece of machinery into my home. I keep the rope stashed in my closet when not in use, and it weighs about as much as a hockey puck (around 160 grams for both the rope and handles).

It costs almost three times as much as a dumb jump rope, but it’s still at an affordable price point as far as exercise equipment goes, and it gives you a full-body workout. You’re effectively investing in an activity tracker that serves one purpose: counting jumps. If you don’t need any incentive to hit your daily goal, and either don’t mind manually counting or just trusting that you exercised the right amount given a period of time, you’re probably fine with a $14 dumb rope. For me, I need a little graphic tracker urging me on. If that means spending a bit more on a rope that dings when I start jumping and syncs with my iPhone, I’m not sweating it.