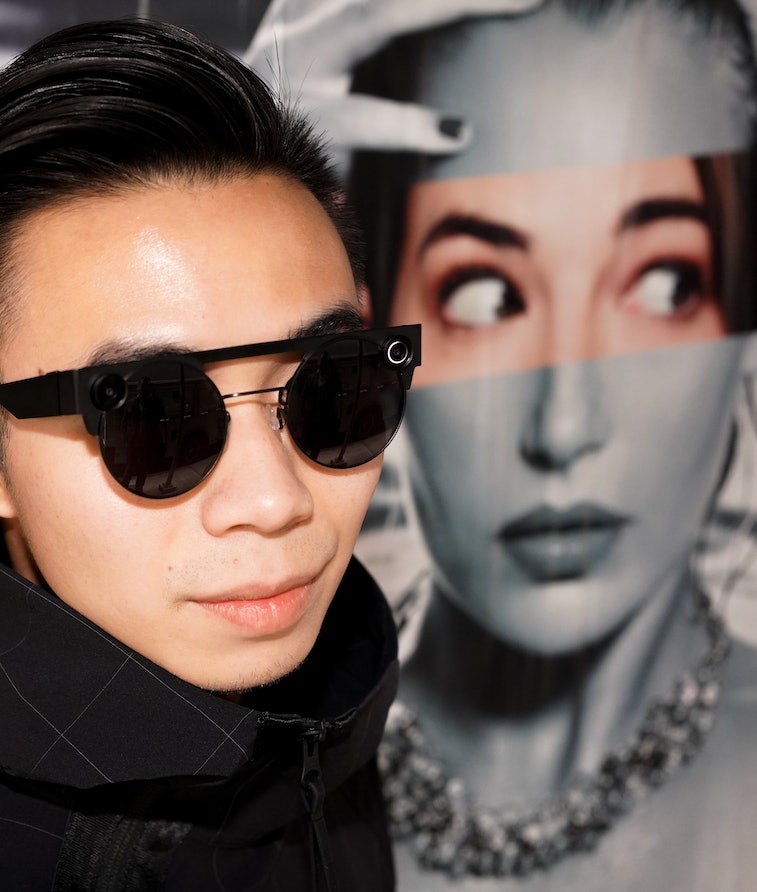 The original point of Snap’s Spectacles was to capture photos and videos from your perspective — to stay in the moment instead of living life through a screen. Just press record. That is what you get using Spectacles v1 and 2. But with Spectacles 3, Snap wants people to use its dual cameras to create ARcontent, which is more work than it’s worth.

As a digital content creator, I tried really hard to understand Spectacles 3. But the whole experience, from shooting to importing content to applying AR filters made me want to bang my head against a wall. And at $380, Spectacles 3 are way too expensive. Like Google Glass, I think all AR wearables are DOA — or will take a very, very long time to find a foothold with the average consumer.

More stylish — Spectacles 3 swings in the opposite style direction of Spectacles v1 and 2: it’s haute, retro, and definitely seems like the kind of wearable tech will.i.am would rock (not exactly a good thing). I like the high-quality metal casing and the clever charging mechanism, which connects the top bar of the glasses to a magnetic latch inside the leather case (it collapses neatly from its Toblerone-like shape for easy pocketing). However, Spectacles 3 felt tight on my face. I passed the new camera glasses around to the Input and Inverse teams and most of them immediately said they were heavy (they weigh 56.5 grams versus 45-52 grams for the different Spectacles 2 frames) and squeezed their faces.

I felt chic strolling around SoHo with Spectacles 3, but the imprints on my nose left from the stiff nose pads and oil stains from the top bar pressing up against my glabella (that’s the space between your eyebrows, you’re welcome) suggested otherwise. I like that Snap ditched the toy-like design of Spectacles v1 and 2 for a more serious look, but the frame’s silhouette isn’t for everyone.

No longer spontaneous — With Spectacles 3, I have to plan out my shots, which takes spontaneity out of the equation. To get the most out of Spectacles 3, you need to consider what kind of footage you want to capture and which AR filters (Snap calls them “3D effects,” not AR, but I’m going to stick to calling them AR) to apply later. In other words: you’re playing cinematographer, director, and editor just like you would shooting with a phone or a camera.

Juggling all of these roles is critical because Spectacles 3 are merely dual cameras built into sunglasses. There’s no way to preview the 3D effects in the lenses because they’re not displays. Nor can you preview them inside Snapchat.

Basically, you’re shooting almost blind with Spectacles 3 — the cameras have a wide field of view, but the footage isn’t quite what your eyes see — then importing the 3D photos and videos into Snapchat and applying 3D effects on top of them. The creation process isn’t better than shooting with your phone, which at least lets you frame a shot exactly the way you want it.

Creating 3D/AR-equipped content with Spectacles is the opposite experience of Spectacles v1 and 2, which encourage you to not think about composition. This friction makes Spectacles 3 not ideal for most people who want to create and share content in real time. In fact, Snap insists Spectacles 3 were made for creators and influencers — the kinds of experimental people who get excited about new digital tools. Someone like me. And yet, I didn’t enjoy the Spectacles 3 experience very much.

The new Spectacles fly in the face of innovation, making creation laborious, confusing, and worst of all, unfun.

Everything’s so confusing and slow — Shooting with Spectacles 3 requires a lot of trial and error. Each AR filter has its pros and cons. The “Fantasy Bird” filter works best when you’re moving forward, like walking down streets and paths, but not for panning shots. The “Flower Projections” filter works great on solid objects like monuments and buildings, but they have to be simple enough so that the details don’t confuse the projection mapping. The “Gradient Blobs” only looks good when a scene has open space and isn’t very busy.

I love experimenting with new mediums, but without a live preview, I ended up discarding a lot of Spectacles 3 videos I took because the AR filters didn’t look good on them. It’s possible to get a usable AR video, but most of your stuff is going to look really rough. Blobs and foil balloons that should appear in front of and behind objects often don’t and instead highlight how primitive object-occlusion technology is.

The roughness of the AR visuals would be easily forgiven if not for another major point of frustration: applying AR filters is a slow and unpredictable process. As if importing Spectacles footage into Snapchat wasn’t already slow, to apply AR filters you have to wait for a video to finish “downloading 3D,” “syncing 3D,” and “generating 3D” (Snapchat shows a completion percentage for each of these) before you can swipe to select one. The experience can only be described as painful.

It gets worse: sometimes the clips don’t even need to download, sync, and generate the 3D. It seemed totally random! I had to wait on all three for what appeared to be more complicated scenes, but simpler scenes in places with like plain walls required almost no processing to enable AR filters. Even over fast Wi-Fi, processing Spectacles footage for AR can sometimes take minutes. The best-case scenario is a few seconds.

But wait, it gets even worse: the Google Cardboard-like “3D Viewer” that comes with Spectacles 3 can’t be used to view any videos you’ve applied AR filters to. Which makes it just a Google Cardboard for looking at your regular not-as-amusing Spectacles POV videos.

Too expensive — My thoughts on Spectacles 3 really comes down to one question: would your favorite influencers use them? The answer, I believe, is no. The genesis of the power of platforms like Snapchat and Instagram was that they made creating beautiful, weird, interesting stuff you could share with people frictionless. You didn’t need to be a pro video editor or expert Photoshop user to make something great; you just needed the phone in your hand and a good idea. The new Spectacles fly in the face of that innovation, making creation laborious, confusing, and worst of all, unfun.

Evan Spiegel believes it’s really early days for AR in glasses — Spectacles 3 is apparently just the first step in a 10-year plan — and he may be right. Every tech company is trying to put some kind of computer on our faces again even though Google Glass was a spectacular flop. Amazon’s experimenting with Echo Frames, Microsoft’s still trudging away with HoloLens 2 (when it’ll ever be ready for consumers instead of the enterprise is still a question mark), and Apple is reportedly unveiling AR glasses as early as next year.

But I’m not that optimistic. I bought (and eventually sold) my original Google Glass. I also bought Spectacles 1 and naively thought it’d pave the way towards camera glasses becoming mainstream (they didn’t). As they are right now, Spectacles 3 aren’t very useful to the pros and cost too much for an average user. Until Snapchat puts AR directly in the lenses and removes many of the frictions of the experience, Spectacles 3 are a product in search of a digital medium that I don’t think anyone really wants.