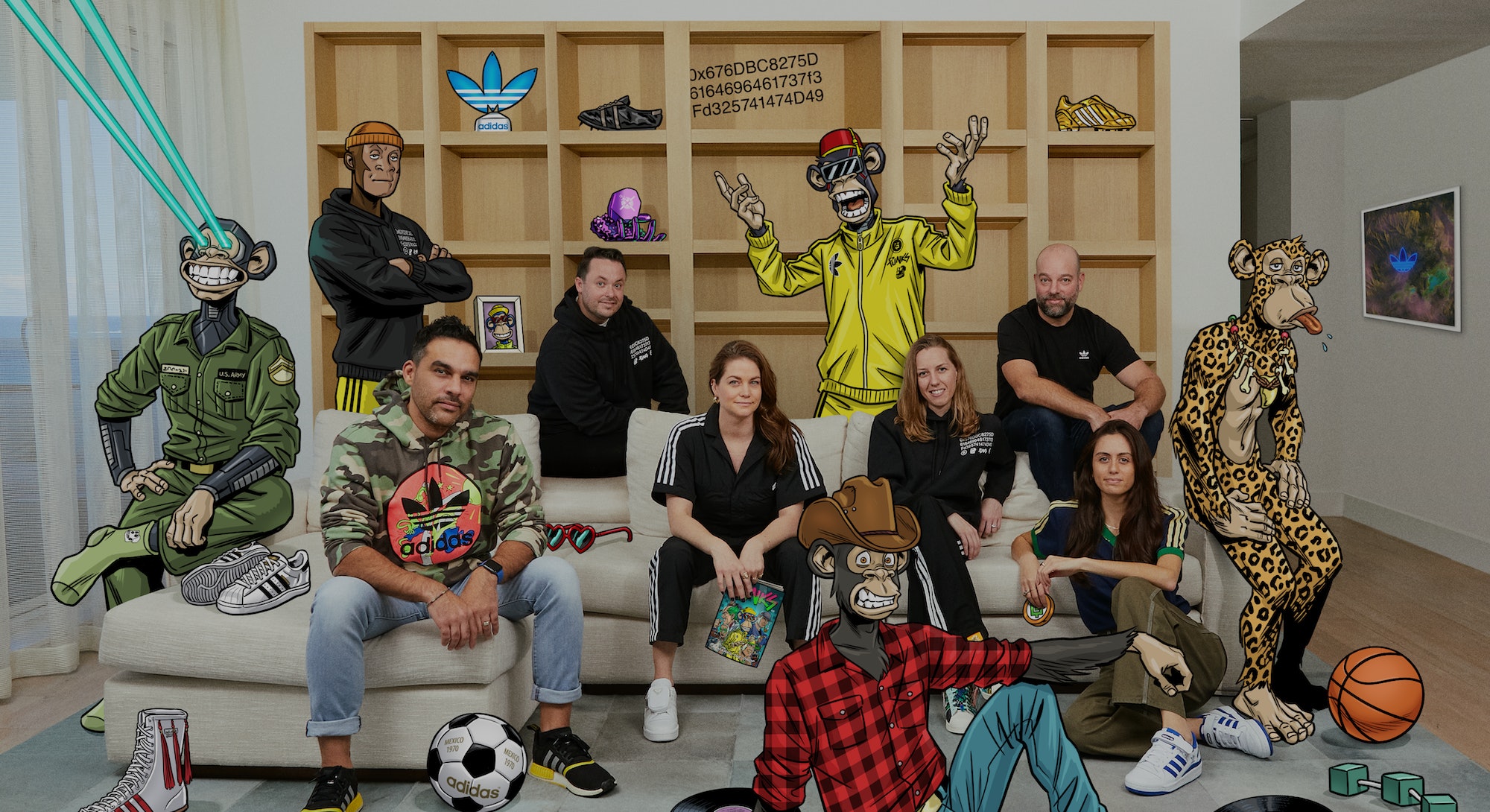 The Bored Ape will now be decked out in stripes, as Adidas partners with the hottest NFT project of the moment for its first foray into the metaverse.

On Friday, December 17, Adidas will release its first NFTs, which will be followed next year by wearable items for blockchain-based gaming and real-life apparel made available to purchase only for owners of its non-fungible tokens. To make the project a four-way partnership, Punks Comic has also released a digital book featuring new and existing characters — including Gmoney, an anonymous NFT collector and influencer who’s helped guide the sportswear giant into a new virtual space.

As a variety of brands have issued a full court blitz seeking to capitalize on the exploding NFT market and its many offshoots, Adidas landing Bored Ape Yacht Club reads as the metaverse equivalent of securing a Virgil Abloh or Kanye West as a creative partner. But despite BAYC’s current status as the preeminent NFT creator en-vogue, the origins of its link-up with Adidas date back six months prior, recent history by most standards but a time when few had yet to see a series of cartoon monkeys sporting blasé expressions and posh attire.

“It was more about a set of underlying values than it was about the star power that the Ape would give us that’s pretty recent,” Tareq Nazlawy, senior director of digital growth for Adidas, told Input in an interview. “When you want join a new space, you need to figure out how to turn up in a way wish shows everyone who’s there that you understand what’s happening. And with Bored Ape, we’ve really learned how incredible it is that technology has created a new context for what it means to belong to a community which can create value for its members.”

The community that Adidas is entering was shown in full force at the end of October, when members of the Bored Ape Yacht Club gathered in New York City for the weeklong Ape Fest 2021. At various parties in Manhattan and Brooklyn, BAYC owners showed up sporting masks of the Ape NFTs they call their own along with branded apparel that can only be purchased by holders of the tokens with a floor price that’s climbed to six figures. The club members drank, competed in a Halloween costume contest, and took in performances from Beck, The Strokes, and Lil Baby — all brought together by a band of fictional apes that have become one of the hottest collectables in the world, virtual or otherwise.

Ape Fest 2021 was in essence a playground for the monied, natural given the spike in value for BAYC’s NFTS, but all parties involved in the Adidas collaboration say they want this project to help make the metaverse more inclusive and educate newcomers about how they can participate. Although initial prices for the tokens that’ll be minted with the Apes wearing co-branded apparel have yet to be set in stone, Nazlawy says the cost will be comparable to one of Adidas’ more luxury sneakers. (For reference, Adidas Yeezy sneakers typically retail in the $200 range, while its collaborations with Prada have run from $500 to $700 a pop).

Early access to purchase one of the NFTs will be given to those who claimed Adidas’ free Proof of Attendance Protocol (POAP) token midway through November. At the time it was released, Adidas remained coy on what the POAP would be used for, but teased that it “may come in handy” soon.

Following a model already established by Bored Ape Yacht Club and that befits a brand such as Adidas, both virtual and physical product will be made available exclusive to NFT holders in 2022. Among the items is Adidas’ own take on the orange beanie signature to Gmoney, with the virtual wearables to appear in the blockchain-based game The Sandbox.

The first edition of Punks Comic’s Issue 2 ‘X Marks the Spot,” meanwhile, already sold out its entire run of 10,000 mintings within the first hour of its release last Friday. Each copy sold for 0.1 Etherium, and subsequent sales for the comic have since reached as high as 1.01 ETH with a floor price of 0.4 ETH. Subsequent releases will consist of 6,000 copies of the second edition, which will feature eight different covers with 750 of each. 3,000 third editions will then be made available for free to owners of the first edition.

“X Marks the Spot”’s story sees Courtney and the punks working alongside BAYC’s eight Elite Apes and Indigo Herz, whose NFT has been purchased by Adidas, to defeat Frank Lopez and secure his bounty. Upon purchasing the NFT comic (and presumably reading it), minters are given the option to either keep and “stake” or “burn” it. By staking it, owners will receive $Punks tokens over the next two months and fractional ownership of 16 CryptoPunks NFTs valued at 600 ETH. Choosing to burn the NFT will give the owner immediate access to $Punks tokens as well as other crypto assets.

When it comes to more conventional collaborations, brands such as Adidas often serve as a steward to smaller brand as it provides access to a much wider audience in exchange for new ideas from out of house. In the case of NFTs, you get the sense that the initial players don’t necessarily need to align themselves with a longer standing corporation. Independence is the name of the game, and jaw-dropping sales figures have shown that key creators can make a windfall all on their own.

Gmoney says he says no more often than not when he’s approached by brands because he doesn’t see any desire by them to push boundaries doing more than slapping a logo on some artwork. “One of the things that really attracted me to the team at Adidas was that they were willing to go on that journey,” he says. “They’re open to learning about how the community works, being like, “Okay, NFTS are not just art, they’re not just about collecting.’ I’m going to do very well on my own, but I want to be working with people that want to push the space forward as much as I do.”

Nazlawy teases that there will be more to come from Adidas in the metaverse and that it wants to work with the community to build with their vision in mind. And even if a physical product remains a component for the brand’s first NFT project, that doesn’t always need to be the case going forward. After all, digital designs don’t carry the same limitations that those in the real world do, raising all sorts of possibilities for sneakers, apparel, or items we may not have even considered yet.

Obviously, skepticism remains as to what the ultimate worth of NFTs will be when there’s no longer a chain of buyers to drive up the price. Sneakerheads and fashion devotees specifically may not be drawn en masse to a community that dotes over the largely intangible, items that you can’t actually wear. Still, some degree of crossover will indeed exist between the two worlds, and a big enough audience already exists so that brands need to take the metaverse seriously.

For Adidas’ part, it hasn’t just slapped its Trefoil onto an Ape and called it a day. It’s created multiple avenues to interact with its products and ideas on the blockchain — and we could very well look back on this moment and see it just as integral as when Adidas signed Kanye West as its first musician. Conventional wisdom once said you need athletes to sell sportswear, but perhaps a sportswear company doesn’t even need to sell physical product.