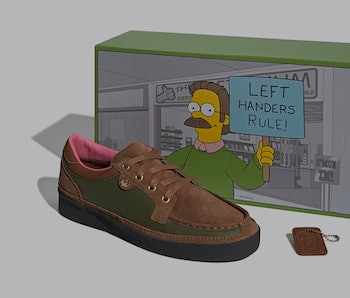 The Simpsons’ most god-fearing, relentlessly kind, and surprisingly buff neighborino is getting himself an Adidas collaboration. A Ned Flanders sneaker is set to release in October and takes inspiration for the season three episode in which he opened a left-handed store called The Leftorium. But don’t worry, there are indeed left and right shoes.

The silhouette for the occasion is the McCarten, a humble low-top named after renowned collector Bobby McCarten. It’s decorated in brown and olive suede with pink lining as a nod to Flanders’ outfit of brown loafers, green sweater, and a pink shirt underneath. You won’t find any details culled from The Leftorium on the shoe itself, but the box it comes in features an image of Flanders holding a “Left Handers Rule!” sign in front of his store.

The Flanders McCarten could have had a timely release on August 13, known to some as Left Handers Day, but instead, it’ll arrive on the 20th anniversary of the episode that inspired it.

The episode that birthed the shoes — “When Flanders Failed,” The Simpsons’ third episode of season three, first aired on October 3, 1991. In it, a wishbone breaks in Homer’s favor and he wishes to see Flanders’ business venture fail. When the wish becomes true, the Flanders family loses their home and are forced to live in their car. Feeling remorseful, Homer urges all of Springfield’s left-handed residents to patronize The Leftorium, and the boon is enough for Flanders to get back his home.

The episode is widely considered one of the series’ best, and the sneakers are also considerably better than the Simpsons collaborations that have preceded it. With only subtle details tying it Ned Flanders, few people will understand the reference and will only see a tasteful shoe. It’s an “if you know you know” type of thing, which is often where sneakers are at their best, and you’ll be able to partake in the fun on October 3 for a palatable $120.