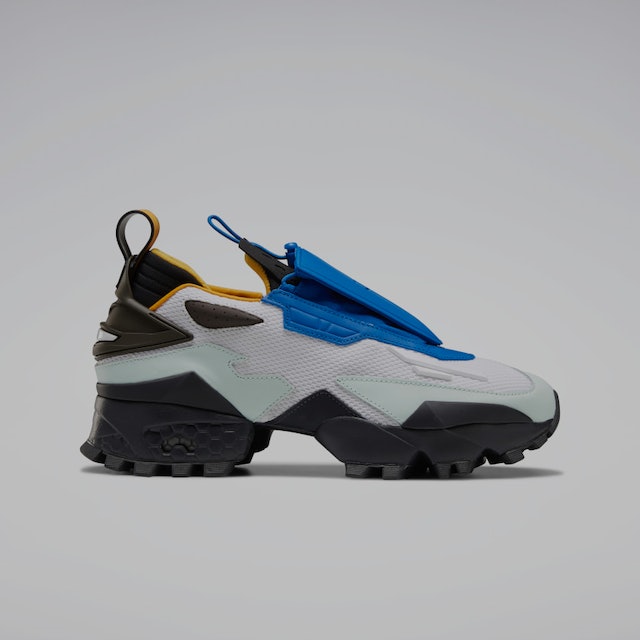 Adidas may be throwing its hands up over its attempts to bring Reebok back to life. The once-fledging brand is reportedly up for sale, according to multiple reports, and could wind up being sold as soon as March. Interested buyers may include VF Corp, which owns The North Face, Vans, and Timberland, and the Chinese sportswear brand Anta, which also owns Fila and Arc'teryx.

Reebok was acquired by Adidas in 2005 in a deal worth $3.8 billion. The German sportswear brand acquired the American company in an effort to better compete with Nike on its home turf. Reebok brought in a quarter of Adidas' $2 billion in sales in 2017, but as of June, that figure dipped to just 6.4 percent.

As largely irrelevant as Reebok as today — especially as we still have a year to wait to see what Kerby Jean Raymond does as creative director — it's hard to imagine that the Vector logo appeared on all NFL jerseys as recently as 2012. The company also signed a 10-year deal with the NBA in 2001, only to be replaced by its parent company Adidas in 2006. Go to a thrift shop, sort through the jerseys, and you'll see a relic of Reebok's prominence.

Maybe Shaq will buy it — Shaquille O'Neil, who along with Allen Iverson was once Reebok's biggest endorser, said last year that he'd like to buy Reebok because Adidas has "diluted [the brand] so much to where it’s almost gone." We can't really argue with that.

"If they don’t want it, let me have it," O’Neal added. "I want to bring them back to basketball and to fitness."

That would be a tall order, as Reebok's value has plummeted since its heyday. Last year, Adidas valued the brand at just $995 million, according to Yahoo!, nearly a quarter of what it was purchased for just 15 years ago. The pandemic isn't making things better either, with Reebok's sales falling 42 percent over the last year compared to a decrease of a third for Adidas, which is still heavy, but less precipitous.

Whoever does end up buying Reebok — if, indeed, it is up for sale — has their work cut out for them resuscitating it. While Adidas won't comment on the reports, the parent company is said to have assigned an internal team to seek out a deal. That team has its work cut out for it, too.