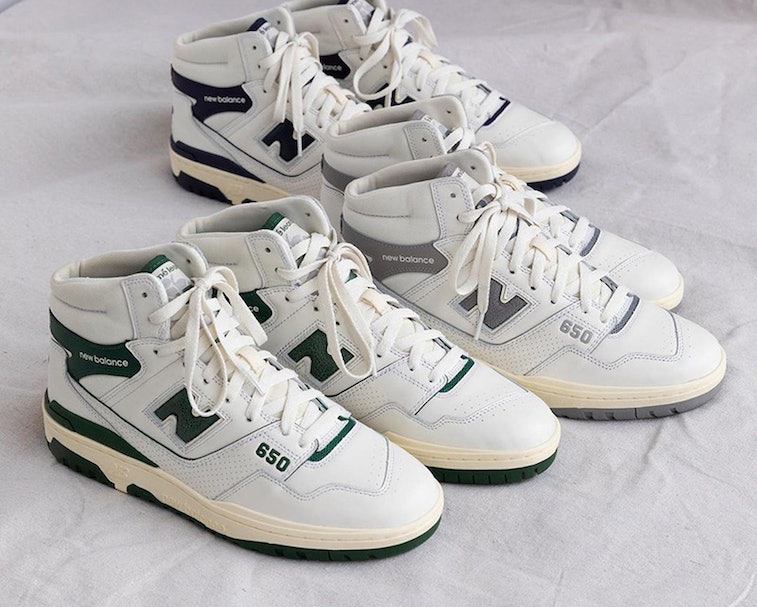 Pre-orders are starting to become more commonplace for sneakers, giving would-be customers a guaranteed purchase in exchange for their patience. This kind of release is a much-welcomed countermeasure to limited-edition drops that shut out the majority of sneakerheads and proves that sneaker companies can indeed meet demand if given the time.

The latest sneaker to get this more democratic treatment is Aimé Leon Dore’s New Balance 650R, a high-top basketball shoe originally released in the late ’80s. Following up on the sold-out 550 collaboration, ALD continues its minimalist treatments for retro basketball kicks. A predominantly white upper and off-white midsole is paired with green, purple, or grey accents for a trio of super clean sneakers.

Neither the 550 nor 650R enjoy the same acclaim as other basketball sneakers from the ’80s, such as the Air Jordan 1 or Converse Weapon, and today the two silhouettes look borderline orthopedic. That’s actually a good thing, though, as dad-like kicks show no signs of slowing down in popularity.

Can you be patient — Aimé Leon Dore opened pre-orders for its 650R today, and deliveries won’t begin until 2022. While the brand hasn’t confirmed it’ll make the sneaker available in unlimited quantities, such a long wait suggests that anyone who wants the shoe will be able to make a pre-order within the window of availability.

To secure a pair, you just need to create an account for ALD’s website and proceed with your pre-order beginning at 11 a.m. ET Friday, July 31. Apparel will also go up for pre-order alongside the sneakers, removing luck from the equation before the entire capsule is eventually given a limited release next year.

The only downside is that you’ll be charged now for a delivery that won’t be fulfilled for at least four months, and a more normal release confirmed for next year may leave some people more apt to chance it. Having options, though, is a refreshing development in this hype-driven landscape — and we can only hope such a model becomes more widely used going forward.