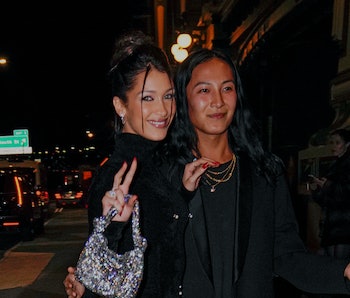 After releasing an initial statement denying the numerous sexual assault allegations made against him, Alexander Wang has made another response that looks something more like an apology.

While he still disputes “some of the details” levied against him, Wang says he “regrets acting in a way that caused [his accusers] pain.” Moving forward, he says, “I will set a better example and use my visibility and influence to encourage others to recognize harmful behaviors. Life is about learning and growth, and now that I know better I will do better."

Wang has been accused of several instances of sexual misconduct, including groping the model Owen Mooney at a nightclub in 2017. Multiple trans models say they were also groped by Wang, and a pattern has emerged of the fashion designer attempting to get his victims intoxicated before making his move.

One person says Wang pressured them into drinking vodka until their memory was blurry and they were “dragged” into a taxi. Wang was allegedly so insistent on the person drinking that Wang hit them in the face with a bottle, causing a gash. The person says they later woke up in Wang’s bed to find the designer performing oral sex on them.

The victims’ attorney responds — Lisa Bloom, an attorney representing 11 of Wang’s accusers, said on Twitter she and her clients had met with the designer. “My clients had the opportunity to speak their truth to him and expressed their pain and hurt,” Bloom wrote. “We acknowledge Mr. Wang’s apology and we are moving forward. We have no further comment on this matter.”

Rumors of Wang’s behavior have been circulating for years before becoming more prominent when Mooney shared his story on TikTok. Many victims then made their own accusations anonymously through the Instagram account Shit Model Management, and follow-up stories from Business of Fashion, the New York Times, and New York Magazine added more accounts.

A change in tone — In January, Wang took a more hard-lined approach in responding to the allegations. “Over the last few days, I have been on the receiving end of baseless and grotesquely false accusations,” Wang said in a statement. “These claims have been wrongfully amplified by social media accounts infamous for posting defamatory material from undisclosed and/or anonymous sources with zero evidence of fact checking whatsoever. Seeing these lies about me being perpetuated as truths has been infuriating.

Perhaps Wang’s apology comes as a response to the stories from venerable outlets that had been fact checked. NY Mag’s story released late in February and included several men and nonbinary people who were willing to put their names to their accounts.

Bella Hadid, Hailey Bieber, and other famous friends of Wang’s have also been criticized for remaining silent in wake of the accusations.