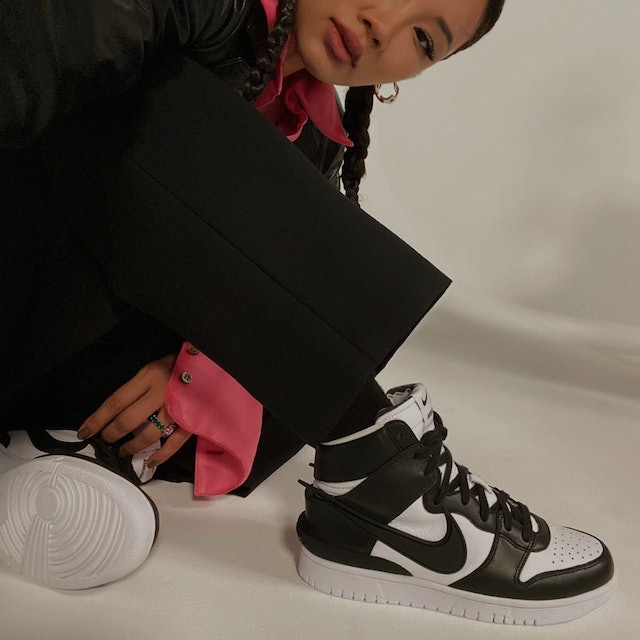 Yoon Ahn's second Nike sneaker finally has a release date, or at least a release month. The founder and designer of Ambush has announced her Nike Dunk High will release in December, putting a pin on what's likely to be one of the best sneaker releases of winter.

Ahn first showed her winged Dunk at in February at Nike's Future Sports Forum, where Off-White's Rubber Dunk was also unveiled. The Ambush collab was first shown in an all-pink color treatment, and Am has since shown a black-and-white variant that'll release alongside it. Lately, we've seen an assortment of hyped Nike sneakers release exclusively in women's sizes — only to be gobbled up by men anyway — but Ahn has promised her new sneaker will release with both men's and women's sizing.

Let's inspect — The most prominent design flourish from Ambush is a rubber Swoosh that protrudes from the upper and flies off the back of the sneaker like tailpipes to go along with the motocross-inspired apparel she created for Nike. A rubber heel counter has also been added to give the Dunk more sense of depth, while a new tapered collar sits above the standard paneling. Although motocross provides the overt reference point, I'm also getting a sense of Atomic Age design

Ambush's logo is debossed onto the rubber heel counter, although the effect is more subtle on the black-and-white version than the tonal pink. It makes another appearance elsewhere beneath the Nike logo tongue patch.

Ambush has previously gone for boots — Ambush's first sneaker collaboration with Nike turned the Air Max 180 into a boot with a fully wrapped, laceless foot. She carried over the idea to a still-unreleased Converse that makes duck boots significantly more appealing. The latter shoe has been pegged to release for the FW20 season, and we're awaiting it just as eagerly as we are the Dunks.