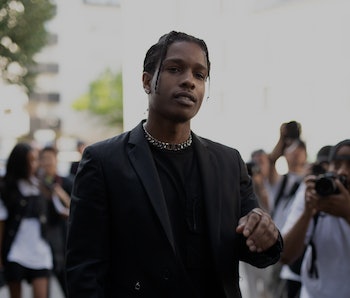 A$AP Rocky’s wardrobe choices have taken a backseat to Rihanna’s consistently immaculate maternity style, but an outfit he wore earlier this year at Paris Fashion Week is drawing newfound attention. The Fashion Killa himself rocked a leather bomber jacket and matching pants both adorned by the Mercedes-Benz logo, and now we’ve learned the garms are part of an official collaboration between Rocky and the German car manufacturer.

What’s driving the collection — Rocky took to Instagram to tease the the new partnership before taking down the post and editing it. Gone is the caption, “HISTORY IN DA MAKING,” but what remains is a video seeing a logo for his AWGE creative agency glistening in the same font Mercedes AMG uses. The post ain’t much in the way of information, but an additional post from AWGE’s account gives us some idea of what to expect in product.

A safety orange neon bomber jacket featuring Mercedes’ Three-Pointed Star logo is teased in the photo, and high-vis pants completing the look can reasonably be assumed to be part of the impending capsule as well. Rocky’s original video post also included shots of a green and black belt with a buckle in the style of hood ornaments, but it being axed in the editing process could cast doubt on its ultimate release.

The mystery that is AWGE — If you’re unfamiliar with AWGE, it essentially enlists the help of Playboi Carti and other members of the A$AP Mob to help with creative direction, music videos, and other fashion projects. While it started to gain traction in 2015, much of its inner workings are still kept under wraps. The collective has two rules: “Never reveal what AWGE means” and “When in doubt, always refer to #1.” It's Fight Club-esque secrecy, but the site is pretty fun to navigate if you want to see more of their work and members.

Rocky seems to have a soft spot for Benzes, as shown by a rare collaborative hat from 2019, but it’s a wonder a full apparel collab hasn’t come sooner. He starred in the brand’s “Grow Up” car campaign further back in 2017 and also included a couple of vintage models in the 2018 “Gunz n Butter” music video. Late designer Virgil Abloh also worked with Mercedes in 2020, and the latest news suggest the company is eager to continue pushing into the spend-happy streetwear demo.

We’ll have to wait for more word on when the AWGE x Mercedes Benz collection will actually drop, but that too will have to take a backseat toward anticipation for his child’s birth.