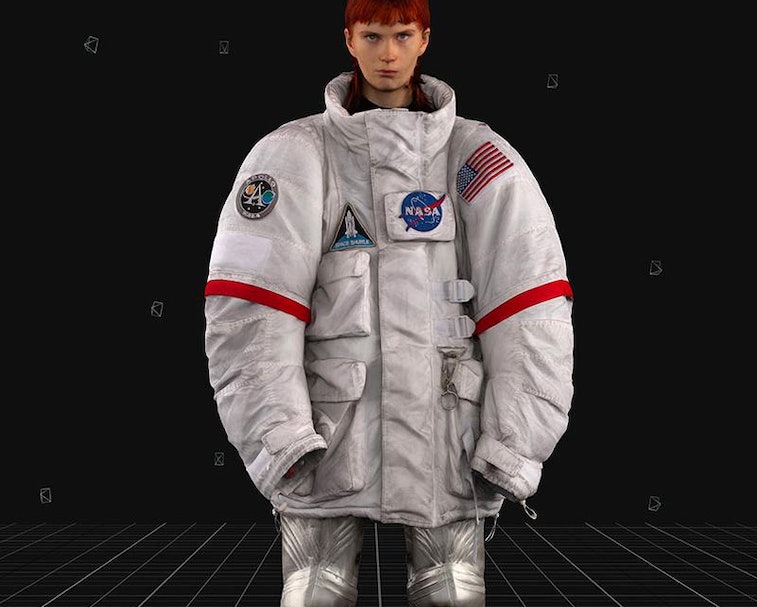 If your budget doesn’t allow for a $28 million trip to space with Jeff Bezos, Balenciaga’s NASA collection is here to relieve your space-themed spending. As first debuted in the luxury brand’s FW21 video game, the capsule revamps traditional astronaut wear — complete with the NASA logo — into jackets, graphic tees, bags, and even socks.

And as authentic as some of Balenciaga’s pieces look, know the collection isn’t a collaboration with NASA. Per The Fashion Law, almost anyone can use the space center’s logo — free of charge — so long as the design is submitted to the Multimedia Division of NASA’s Office of Communications and the agency approves the specific uses. So while NASA hasn’t actually had input on Balenciaga’s capsule, the cosmic wares have technically been approved by the space agency.

Includes everything under the sun — Given the luxury label’s attention to detail, it’s no wonder NASA gave Balenciaga the go-ahead. The brand’s Space Parka has reinterpreted the classic white astronaut suit into a ripstop puffer jacket you can wear on Earth, complete with multiple cargo pockets, red accents, a carabiner, and a slew of space-themed patches.

Two bomber jackets, one black and one blue, accompany the puffer while translating the space theme in a more subtle way. Bearing similar patches — one of which replaces NASA’s retro logo with its new one — the bombers sport ruched arms and a red Balenciaga tag.

Graphic tees, polos, hoodies, socks, and co-branded bags make up the more wearable part of the collection. Most sport the same logos as the Space Parka upon white and black bases, utilizing NASA’s retro logo and Balenciaga’s minimal one. A white fanny pack and backpack, however, boast the space agency’s more modern ‘80s logo in red embroidery. All of the chunky bags come with a name tag, lest you confuse your goods with another astronaut’s.

Space race, except it’s a Balenciaga collection — Now you can look like you accompanied Bezos to space without spending millions of dollars (or time with one of the most hated men in America). Ranging from $150 to $5,050, Balenciaga’s NASA capsule can be found at select stores or the brand’s website. Certain pieces, such as the Space Parka and Bombers, are only available for pre-order, though we can imagine they’ll be the first to sell out. Who doesn’t want to walk around looking like an astronaut?