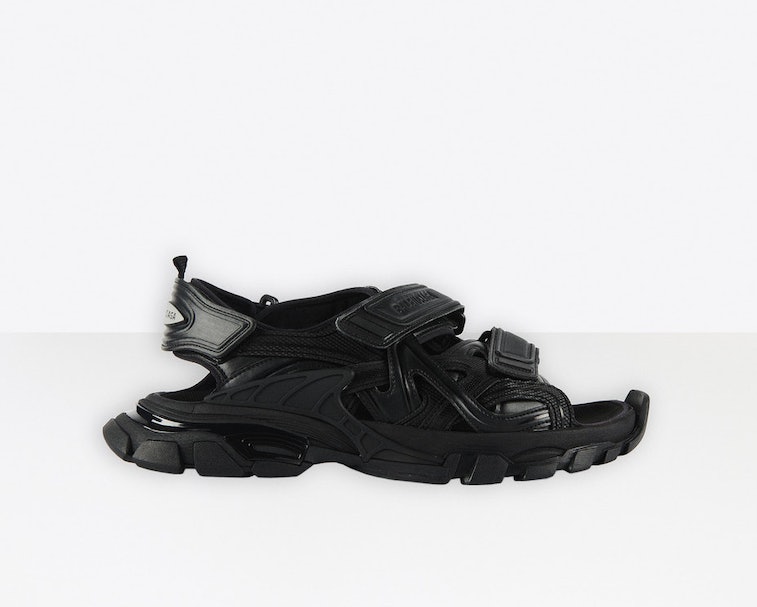 As spring draws nearer, it's time to start thinking about all the clothing and footwear options that'll soon be unlocked. Chief among them are sandals, even though they remain polarizing among men. What is it about dudes and fear of showing off a little toe and ankle?

Whatever's holding guys back, it should be set aside for Balenciaga's new Track sandal. It's a behemoth, an absolute unit of fun-and-sun footwear. Whatever lame implications of masculinity and sandals are out there will be quickly squashed by this big, beefy affair.

The Track sneaker's little brother — Balenciaga's new silhouette is culled from its chunky Track sneaker, which itself was something of a follow-up to the famed Triple S. Both the sandal and the sneaker share a bulky, overlapping construction with a thick sole to match. The sandal frees up just a tad bit of space to let your toes and ankle breathe. Appropriately, the laces have been replaced with two branded velcro straps on the sandals — as if the design didn't already scream "Balenciaga" enough.

Sandals are peaking — We may be approaching peak sandal, in no small part due to Kanye West. 'Ye went viral for pairing a suit with tiny slides at 2 Chainz's wedding in 2018. Last year, he offered up his version of Crocs, the Yeezy Foam Runner, which are rumored to release some time this year. And just this week, his Paris Fashion Week show doubled down on slides as the next big thing.

Elsewhere, the Japanese brand Suicoke has become a fashion favorite for its technical sandals and collaborations with John Elliott, Tyler, the Creator's Golf, and a host of other top-notch brands. I'd also be remiss not to mention MuleBoyz, a sort-of sister movement propagated by Jian DeLeon and Noah Thomas of Highsnobiety that recently culminated in a full-fledged collaboration with Diemme. To borrow their parlance, there's no better time to free the butts.

Choose Balenciaga — Out of all these options, why choose Balenciaga and its $595 price tag? Because I've never seen a sandal look so tough, so menacing. With its self-described "dynamic sole design with an augmented back to propel feet forward," it's likely to hold up well hiking — if you're into that sort of flex.

Look for the Track sandals to drop March 20. And better yet, look for a great sandal explosion all spring and summer.