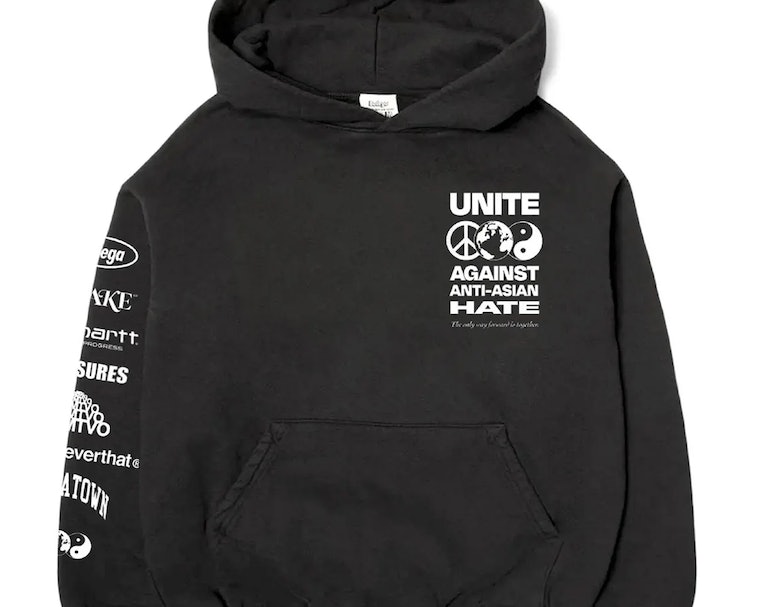 As easy as it is to lampoon streetwear, one of the best features of the culture is its history of stepping up in times of crisis. Last year, we saw numerous brand launch fundraising tees and hoodies in support of the Black Lives Matter movement — and now some of the same outfitters are responding to the recent wave of violence against Asian-Americans in similar suit.

Bodega, the esteemed Boston boutique, has banded together with six other brands to raise money for charities that benefit the Asian American community. Awake, Carhartt Wip, Pleasures, PRMTVO, Thisisneverthat, and Koreatown have all lent their names to an “Unite Against Anti-Asian Hate” hoodie available for pre-sale now.

All proceeds from the hoodie will go to Stop AAPI Hate and the Asian American Legal Defense and Education Fund (AALDEF).

Show your support, too — Both the front and back of the hoodie are adorned with a “Unite Against Anti-Asian Hate” graphic that includes a peace sign, Earth, and a yin yang symbol. Beneath it, the message “The only way forward is together” appears in tiny text — and logos for all seven brands involved are stacked on top of each other along the length of the sleeve.

This hoodie isn’t some cheap Gildan piece tossed out at the last minute either. It’s a high quality fleece hoodie that should last for years, and delivery is slated to begin in four to six weeks.

In an Instagram post announcing the fundraising hoodie, Pleasures designer Alex James didn’t mince words speaking out against the violence that’s necessitated such charitable efforts. “Our country is full of ignorant disgusting racist fucks who prey on Asian men and women,” James said. “The fact that we have to make a hoodie to bring awareness to this systemic issue is wild. Do better America. Let’s raise a shit ton of money for Stop AAPI and AALDEF.”

Available for 72 hours — The AAPI hoodie went up for pre-order through Bodega’s website Tuesday and will remain available until noon ET Friday. $120 is a fair price for the durable hoodie, but if it’s not in your budget you should consider donating directly to the charities involved instead.