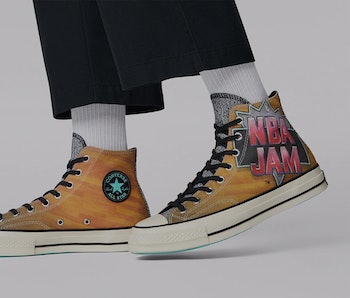 Before NBA2K, there was NBA Jam, an arcade game-turned-console franchise. Filled with funky graphics and memorable announcing, the virtual basketball game was considered a favorite of NBA fans during its 1993-2011 run. Ten years later, Converse is commemorating — or rather, cashing in — on nostalgia for NBA Jam, bringing the game’s graphics to sneakers with two collaborative pairs.

Sticking with shoes as classic as the game itself, Converse plans to incorporate NBA Jam references into its Chuck 70 and Pro Leather sneakers. Popular game phrases, pixelated graphics, and basketball motifs cover both of the thematic shoes.

He’s heating up — True fans of the game will want to opt for the Chuck 70, which boasts a huge NBA Jam logo on its lateral sides in eye-catching red. Set against what looks like a backboard, the graphic falls just below the official NBA logo, while the rest of the shoe’s upper features a hardwood floor pattern nodding to a basketball court. Contrasting black and white tongues mimic TV static to tie in the video game reference.

Converse’s Pro Leather sneaker offers a sleeker, more refined tribute to NBA Jam. Dressed in all black, the shoe sports a pixelated fire graphic around its retro star and chevron logo. The phrase “HE’S ON FIRE” is embossed close by, referring to one of the announcements commonly shouted during NBA Jam games — and the Pro Leather’s metaphorical heat.

Both models incorporate hits of teal to wrap up their commemorative design. To avoid clashing with its busy upper, the Chuck 70 dons the color on its sole unit, while the Pro Leather features teal accents around its collar and tongue branding.

Level up — A release for Converse’s NBA Jam collaboration is anticipated on August 30, when both thematic pairs will drop on the brand’s website. But in the coming weeks, a third sneaker — Converse’s All Star BB Evo — is rumored to join the two existing pairs, though images of the shoe have yet to surface. Perhaps other famous NBA Jam graphics, like the pixelated players or classic video game font, will dress the All Star BB Evo.