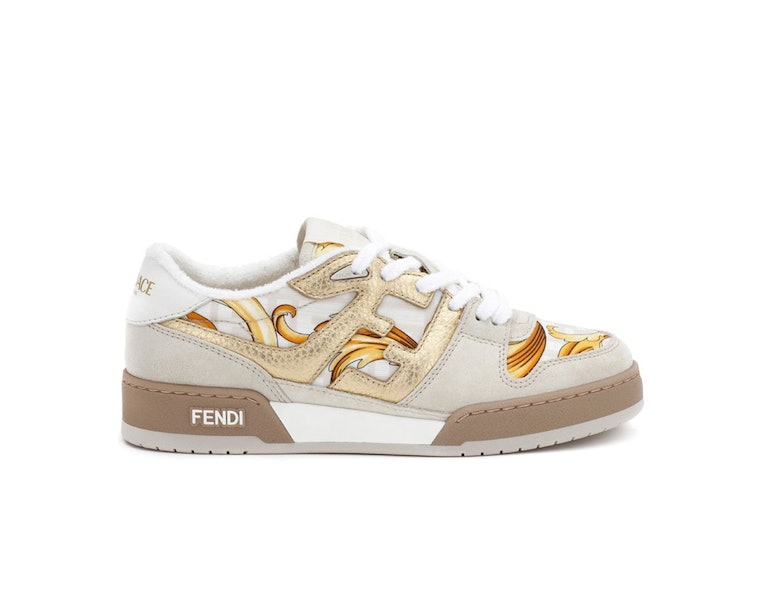 As a major facet of streetwear, skateboarding has proven to be a difficult culture to invoke for luxury brands. Virgil Abloh, a bonafide skater himself throughout his life, showed how to do it right with Louis Vuitton’s first signature shoe made for Lucien Clarke. It can get awkward, however, when people with little connection to skateboarding try to capitalize on skateboarding’s appeal. We’ve seen Coach brick the attempt in the past, and now it’s Fendi and Versace that are fully exposing themselves as posers.

Product images for the highly anticipated collaboration between the two luxury giants have surfaced this week, and the primary focus has been on a skate-influenced sneaker that fully misses the mark. It has a beefy silhouette that could accurately be described as a ripoff of the Dunk Low, only it's made tacky in an attempt at extravagance. Slightly dull gold leather makes up a double “F” motif where you’d typically expect to see a Swoosh, and even worse is Versace's signature baroque print that comprises the basis of the upper.

The silhouette itself isn’t actually new, as Versace has just helped give a makeover to the existing Match sneaker that retails for a whopping $930. Previous color schemes were relatively inoffensive in their neutral tones, but the leap for lavishness here is just entirely too much.

You can’t fake the funk — Donatella Versace, artistic director for the family brand since 1997, quite obviously doesn’t have any skateboarding cred. But neither does Kim Jones, creative director at Dior since 2018 who was named successor to Karl Lagerfield at Fendi concurrently in 2020.

Jones was the steward of Louis Vuitton when it released its landmark collaboration with Supreme in 2017, but it was the latter brand that could be relied on to provide knowledge of skateboarding culture. It would appear there was no such guidance for the link-up of Fendi and Versace, resulting in sneakers equally as cringe as the “Fendace” name mashup that appears on the heel.

Official release details are still to come for the Fendace collection. Whatever the final cost may be for its cringe-worthy sneakers, kicks enthusiasts won’t need a prohibitive price as motivation to sit this one out.