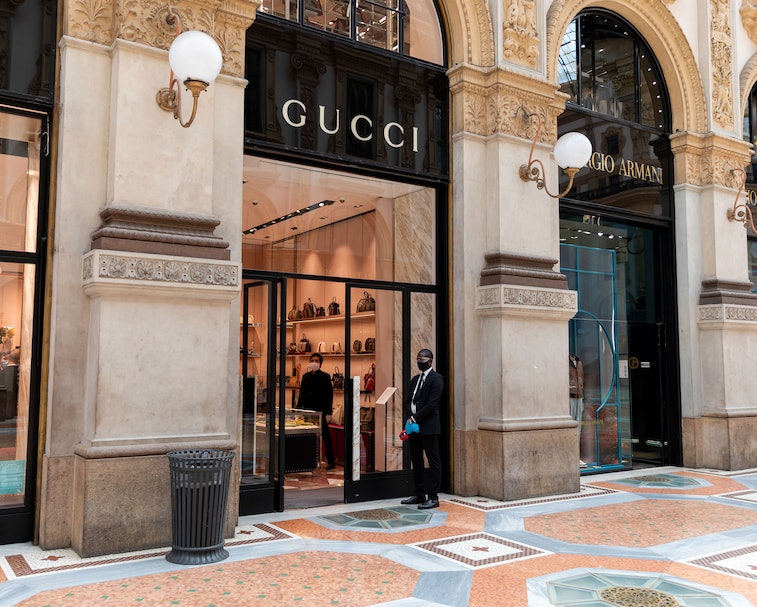 Gucci is expected to reveal its newest collection, dubbed Aria, on April 15. The capsule has been kept tightly under wraps, but according to WWD, rumors have begun to spread online that creative director Alessandro Michele plans to unveil a collaboration with Balenciaga. Although the two labels are often seen as competitors, it should be noted they are sister brands under the Kering group.

Per WWD, Gucci declined to comment and Balenciaga had no comment — perhaps fueling speculation even more. Set to arrive just after Gucci dressed Harry Styles for American Vogue, and after Balenciaga’s Fall 2021 collection debuted via video game, the alleged collaboration would cement the brands’ impact on the fashion industry. Seeing as 2021 marks Gucci’s centenary year, too, the label would be looking to exhibit an extraordinary collection. An over-the-top partnership with another luxury fashion house — such as Balenciaga — would surely do the trick.

Here’s what we do know — Gucci has confirmed its next fashion collection will arrive through a series of short films that will be released digitally through a variety of global platforms. WWD also notes that the new presentation’s name, Aria, is in sync with the brand’s new strategy presented last May and also points to its singularity, as the collection is presented outside of any fashion week calendar. In music, an aria is a self-contained piece for one voice.

Last year through his manifesto “Notes From the Silence,” Gucci’s creative director Michele revealed he was crafting a new course for the brand, abandoning what he has called “the worn-out ritual of seasonalities and shows to regain a new cadence, closer to my expressive call. We will meet just twice a year, to share the chapters of a new story.”

Seemingly inspired by the music world, Michele presented a collection last July called “Epilogue,” worn by the team from his office instead of models. The 12-hour livestream project hinted through its name the conclusion of one chapter — and the beginning of another.

Gucci’s 100-year makeover — Since then, the luxury label has teamed up with The North Face, Pokémon, and K-pop star KAI, meaning a Balenciaga collaboration isn’t out of the question. While Gucci will retain its extravagant status, this new chapter could bring more modernity to the brand with hot partnerships, young ambassadors, and outlandish presentations. Whether Balenciaga is part of that renaissance will only be revealed with Gucci’s latest collection.