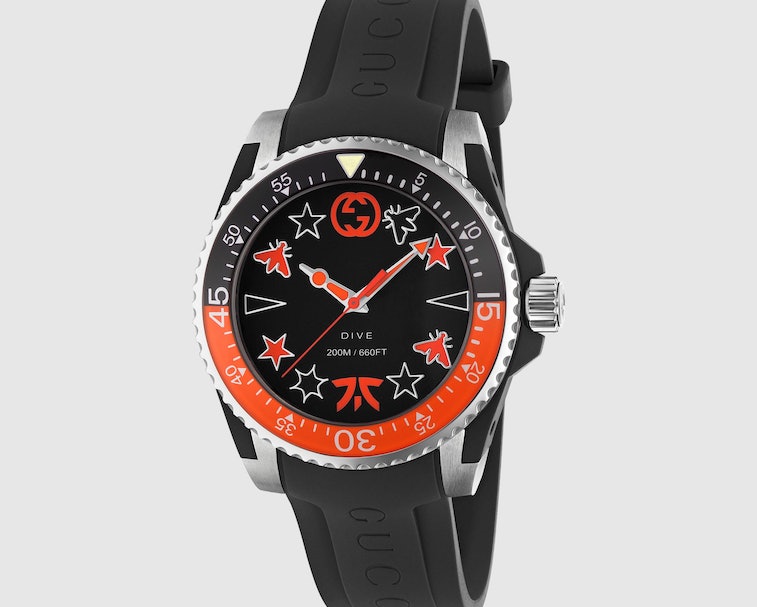 Gucci has introduced a limited edition dive watch in collaboration with esports league Fnatic. It features the esports team's logo and color scheme, and since this is gaming we're talking about, there will even be a matching diving game devoted to the watch that will appear in Gucci's already game-filled app soon. The Swiss-made watch also has Gucci's logo on the crown and it's branding on the clasp.

Louis Vuitton dipped its own toes into the esports world last year when it partnered with Riot Games to create a Trophy Travel case for the Summoner's Cup. Previously the French fashion house created these cases only for major conventional sports, not video game tournaments. Champion also did a special release last year of baseball tees featuring the logos of five esports teams. And Fergus Purcell, of skatewear label Palace fame, is designing the branding and apparel for a new David Beckham-backed esports team.

The question remains, though. Why would gamers want to drop the sort of cash that could buy decent upgrades to a gaming rig on a timepiece?

Why would gamers want a Gucci watch? — Computers display the time on them, after all, and you won't be looking down at your watch when you're furiously fragging n00bz. The timepiece isn't even smart. In fact, the closest it comes to smarts is its quartz movement. It does look good though, with a stainless steel 40mm case and water resistance to a depth of 660 feet. Super LumiNova technology means the watch face is luminescent and easy to read in the dark, though we're not sure how dark a gaming space ever gets thanks to all those RGB keyboards.

Then there's the $1,620 price tag to consider. Gucci's only making 100 Fnatic watches, so perhaps this is where the answer to our question lies. First, there's exclusivity, and in our age of mass production, that's genuine luxury. Then there's the fact that esports is crossing over into the mainstream, and whenever that happens, fashion brands will be ready to capitalize on the hype.

Esports is shifting from a subculture to the mainstream — Esports is becoming a big industry, with revenues estimated to hit $1.56 billion by 2023. Famous celebrities have even been jumping on the bandwagon to capture a piece of that pie by attaching their names to leagues or teams, and tournament prize pools regularly reach the single-digit millions these days. That money has to go somewhere.

For fashion houses like Gucci, this newfound enthusiasm means the opportunity to attach themselves to popular esports players and attract audiences — and shoppers — they haven't before. The Champion baseball jerseys, for instance, could speak to gamers by making them feel more like conventional sports fans. Whatever the reason Gucci decided to make the Fnatic, if you want one you'll need to move fast as pre-orders are already open.