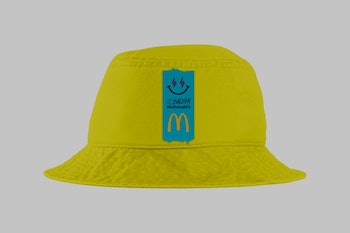 Travis Scott made McDonald's hot with a massive merch collaboration that reportedly earned him $15 million in sales alone. The fast-food giant sought to continue its musician-aided foray into streetwear with a J Balvin partnership — but four months after putting the co-branded goods up for sale, the release has been canceled.

Vibras Lab, J Balvin's business managers, sent an email this month to customers informing them that it wouldn't be able to fulfill orders because of production issues. According to Business Insider, the company said issues with supplies "did not meet our expectations" and thus orders were canceled.

Nearly McDonald's 50 items went up for sale on J Balvin's webstore, including hoodies, T-shirts, hats, and accessory oddities like a receipt temporary tattoo and a Golden Arches two-finger ring. Refunds will be issued for all orders, but customers will receive a co-branded beanie different from those originally sold and a "note" from J Balvin as consolation.

Fumbling the bag — Partnering with McDonald's was a weird but lucrative move for Travis Scott, but a no-brainer for McDonald's. The fast-food restaurant has struggled to win over millennials for the last decade, and Scott has a proven record as a youth whisperer and merchandising machine.

Scott's "Cactus Jack" meal, a loosely altered Quarter Pounder, was so popular many locations ran out of the ingredients to make it. Overall McDonald's sales during the period of Scott's promotion rose 4.6 percent after dropping 8.7 percent in the previous quarter when coronavirus lockdowns first went into effect.

J Balvin followed as McDonald's next celebrity endorser, releasing his own meal using existing ingredients and a crop of merchandise designed by him as the second phase. It's unclear how much merchandise originally sold — although it's likely less than Scott's — but, the revenue lost from canceling the collection is less important than causing consumers to lose faith.

The world of streetwear is fraught with disappointment, as scarcity prevents most would-be customers from shelling out their money in the first place. Even worse is when a retailer fails to deliver — just look at how often Anti Social Social Club is criticized for its notoriously sluggish shipping.

If you're a streetwear devotee who was won over by the newfound hype of McDonald's only to see your money held in limbo for months before finally getting a refund, why would you go through that process again? The goodwill generated by Scott's McDonald's promotion may already have been killed by the failure of J Balvin's.

A third musical collaborator for McDonald's hasn't yet materialized, and if McDonald's seeks to use the formula again it may be doomed from the start. Streetwear consumers are notoriously fickle, and the one thing you absolutely cannot do is fall through on the product.