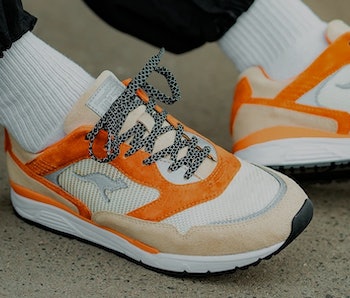 KangaRoos is aiming for a double dose of good with its "Triple Zero" Ultimate sneaker. The upcycled kicks are made from used firehoses and firefighter jackets in a bid to raise awareness for the wildfires that have broken out across the world. The orange detailing on the upper uses material from B-75 firehoses, while the sockliner is constructed from jackets worn by firefighters.

Its name, "Triple Zero," is a reference to the 000 emergency number in Australia (the local equivalent of 911), where wildfires burned more than 46 million acres of land from last September into March. A portion of the proceeds for the "Triple Zero" will go to The Kangaroo Sanctuary, which rescues and rehabilitates baby kangaroos in Central Australia.

Handmade in Germany — KangaRoos sneakers, which were named for signature zippered side pocket, went dormant in the early '90s but have since seen production taken over by Hummel & Hummel in Germany. Although technically a licensee, Hummel & Hummel relaunched the brand in 2009 and has made high quality the selling point with its "Made in Germany" editions.

In addition to the upcycled materials, which may show signs of wear on some sneakers, the "Triple Zero" ultimate features a cream calf suede and 3M reflective stripes. On the heel, KangaRoos created a special debossed firehouse graphic to shore up the theme.

Dropping this week — KangaRoos "Triple Zero" ultimate releases this Friday, October 9, and is limited to just 517 pairs. Retail is set at ~$306, and a full list of retailers can be found right here. That's a lot to pay for a sneaker, especially when we're talking about a brand that doesn't often get a lot of attention, but just think of the baby kangaroos.