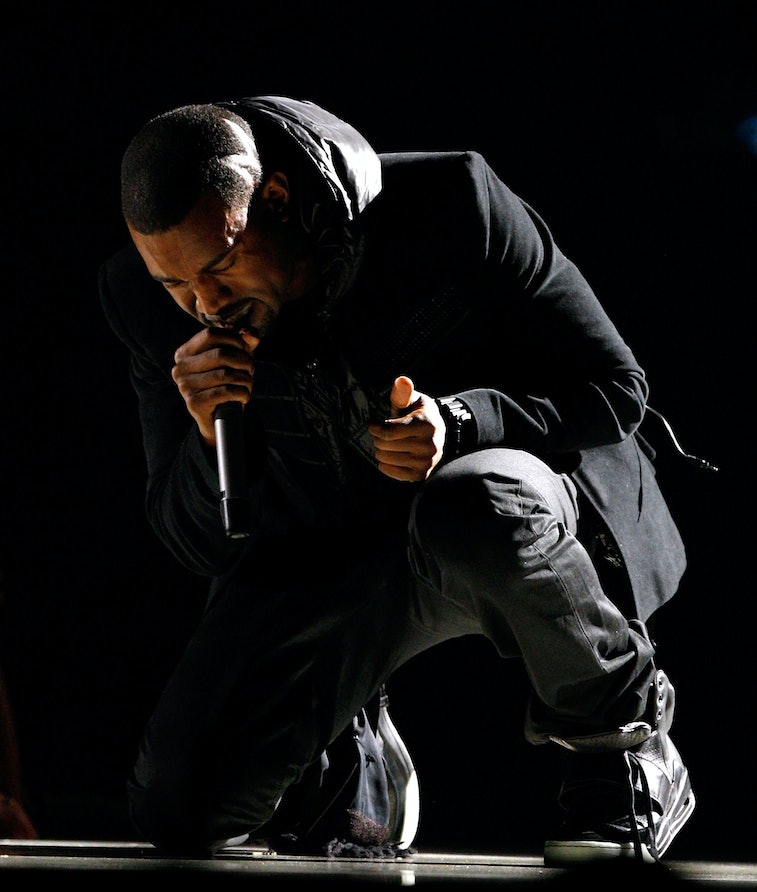 Seriously, he literally has a song called “I Love Kanye.” So when the controversial, multi-hyphenate superstar told Apple Music's Zane Lowe in 2019 that he was "unquestionably, undoubtedly, the greatest human artist of all time," most of us laughed and chalked it up to what else — Kanye being Kanye. After all, this is the same man who also said, "My greatest pain in life is not being able to see myself perform.”

With the recent news of his 2008 Nike Air Yeezy sneaker sample selling for a record-breaking $1.8 million, it begs the question: was Kanye right all along? Is he really the greatest artist of all time?

Before you roll your eyes and go back to doom-scrolling on social media, hear me out. If you aren’t in the sneaker world, maybe this sale doesn’t register on your radar as an incredible feat. For reference, the second most expensive sneaker in history is a pair of autographed, game-worn 1985 Jordan 1s which sold for $615,000 in May 2020. While Michael Jordan is undoubtedly in the conversation as one of the best basketball players of all time, he did not design his sneaker. Kanye, however, had an active role in the design of his Yeezys. It wasn’t just the fame or a moment that was tied to that historic sale, it was the artistry as well.

Prior to the red MAGA hat, the highly publicized marriage to Kim Kardashian, the billion-dollar Yeezy empire, the Taylor Swift drama, the Grammys, the money, the fame… Kanye West started his artistic trajectory as a four-year-old art student at Chicago’s Hyde Park Art Academy. He then attended the Art Institute of Chicago, Chicago State University, Nanjing University in the People’s Republic of China, and the Polaris School for Individual Education all by the age of 17.

I find it fascinating that despite his long career in the public eye, many people are unaware of his reputable art background. I come from the school of thought that if you are going to talk a big talk, you need to be able to back it up. In the case of debating “the best artist ever,” it’s worth noting his high art education.

“My greatest pain in life is not being able to see myself perform.”

In a 2020 episode of PBS’ Antiques Roadshow series, the world caught a glimpse of Kanye’s artistic abilities when a few of his high school drawings were examined by expert collectibles appraiser Laura Woolley. During the segment, Woolley, visibly in awe at the talent exhibited by a then-teenaged Kanye West exclaimed, “A lot of people are probably not aware of how talented he is as an artist outside of his music career. I think these pieces demonstrate an extraordinary facility as an artist.”

A flyer from that 1995 high school art show included a tidbit revealing Kanye’s plans to attend college at the American Academy of Art in Chicago to further his art education. It also noted that he intended to “pursue a career as a music producer as well.” As we all know now, the latter portion of those plans would go on to reach heights of success only Kanye himself saw coming.

As the story goes, his first big break in music came at the age of 19 when Kanye produced eight tracks for Chicago rapper Gravity’s debut album. By 2000, Kanye had dropped out of college to focus on music and reached a tipping point in his career: becoming an in-house producer for Roc-A-Fella records. He quickly cemented his legacy as a producer when he worked on what would go on to be hailed one of the greatest hip hop albums of all time, Jay-Z's The Blueprint.

“I am Warhol! I am the number one most impactful artist of our generation.”

Reaching such astronomic heights as a producer wasn’t enough for Kanye, he had his eyes set on becoming a recording artist. By 2004, Kanye cemented himself as a multi-talent threat, topping the music charts not only with his debut album The College Dropout but as a producer for hit songs like Jay-Z’s “Encore,” Twista’s “Slow Jamz,” and Alicia Keys’ “You Don’t Know My Name” to list a few. Kanye had the Midas touch — and you better believe he let everyone know it.

As his star-power grew, so did his egomania. Over the course of the next decade, Kanye became a certified global superstar. Love him or hate him, his artistry couldn’t be denied. Fashion was always closely tied to his persona as represented by an early nickname, “The Louis Vuitton Don.” He dabbled in the design world (Mascotte, Pastelle) but it wasn’t until 2008, when he stepped onto the Grammy stage wearing the rare, black Nike Yeezy prototype, that he really made his mark — in a sneaker that would ultimately launch the start of his now billion-dollar Yeezy empire.

This walk down memory lane serves as a reminder that Kanye has reached the absolute pinnacles of success in multiple artistries: music, sneakers, fashion, and design. That brings us back to the question at hand: was Kanye right all along? Is he really the greatest artist of all time?

We already know Kanye’s answer. During a 2013 interview with Sway in the Morning, he very passionately exclaimed, “I am Warhol! I am the number one most impactful artist of our generation.” In a 2016 interview with Rolling Stone, Paul McCartney seemingly agreed, saying working with Kanye “reminded me of Andy Warhol.” However, not everyone shares those sentiments. According to The Washington Post, the late famed songwriter, poet, and author Leonard Cohen wrote a poem simply titled “Kanye West Is Not Picasso” after Kanye famously compared himself to Pablo Picasso.

In a 2016 USA Today article, former Billboard senior editor Alex Gale had a more clear-cut view on the topic explaining, “When you just look at the albums, it’s undeniable. He’s absolutely one of the best, and you could make the argument for the best artist of the 21st century.”

But that’s the rub, right? Kanye is not just his albums. During an Art Basel talk with architect Jacques Herzog, Kanye spoke on his early art days and how everything he’s done since has been an aside. “My original creative background was fine art,” West said.

“Sometimes I actually forget that,” he added. “Except for when I tour and I look back at the stage and say, ‘Wait a second, I forgot this was the whole trick I pulled on everyone to make them think I was a rapper, a musician or celebrity when the entire time it’s all been a giant art project.'”

Ultimately, that’s the thing about art and the eternal debate about who is the best ever: it’s completely subjective. One person’s Picasso is another person’s Kanye.