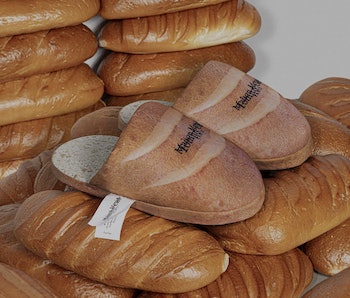 Tommy Cash is making himself stand out from the exploding world of music merch by landing luxury designers as collaborators. After teaming up with Rick Owens, Cash has released a new collaborative capsule with Maison Margiela that includes slippers that look like loaves of bread. Best of all, Cash keeps the prices down to nowhere near what you’d expect for such high-end branding.

Cash is calling his doughy footwear “home loafers,” which sounds a lot more opulent than “slippers.” The ergonomic slippers feature hybrid Maison Margiela x Tommy Cash branding embroidered onto crusty upper, with the insole looking like the inside of a loaf. To complete the look, they come packaged in a clear plastic bag just like what you’d buy at the grocery store. And at ~$113, they’re the cheapest Margiela footwear you’ll ever find.

How about some $12 ramen, too? — Cash and Maison Margiela are also selling a pack of $12 ramen noodles as part of the collaboration, but just like the slippers, they aren’t intended to be eaten. Instead, they should be viewed as more of an art piece — which the label affirms by reading “Eat at your own risk.”

If the food items aren’t your thing, the two partners have also released two pieces of co-branded apparel. Both a black T-shirt (~$65) and black-and-white striped sweater (~$119) see the two names piled on top of each other in embroidery — with the graphic reappearing on a tag stitches out of place onto the shoulder. Cash says the sweater is a tribute to Kurt Cobain, while the tee is inspired by the bootleg creations sold in the ‘90s at bazaars in Eastern Europe.

Cash released a five-minute track to further explain how the capsule is a comment on consumption. In it, he says, “For most of us, being awake means being bombarded by sound, specifically organized for consumption. The everyday noises of streets, nature, and homes are constantly muted by whatever the algorithms bring.”

It’s all available now — You can pick up from the four-piece capsule on Cash’s website right now, and as of now nothing is sold out. Criticizing consumption while selling product isn’t exactly groundbreaking, but the chance to purchase Maison Margiela at such (relatively) low prices is not one to miss.