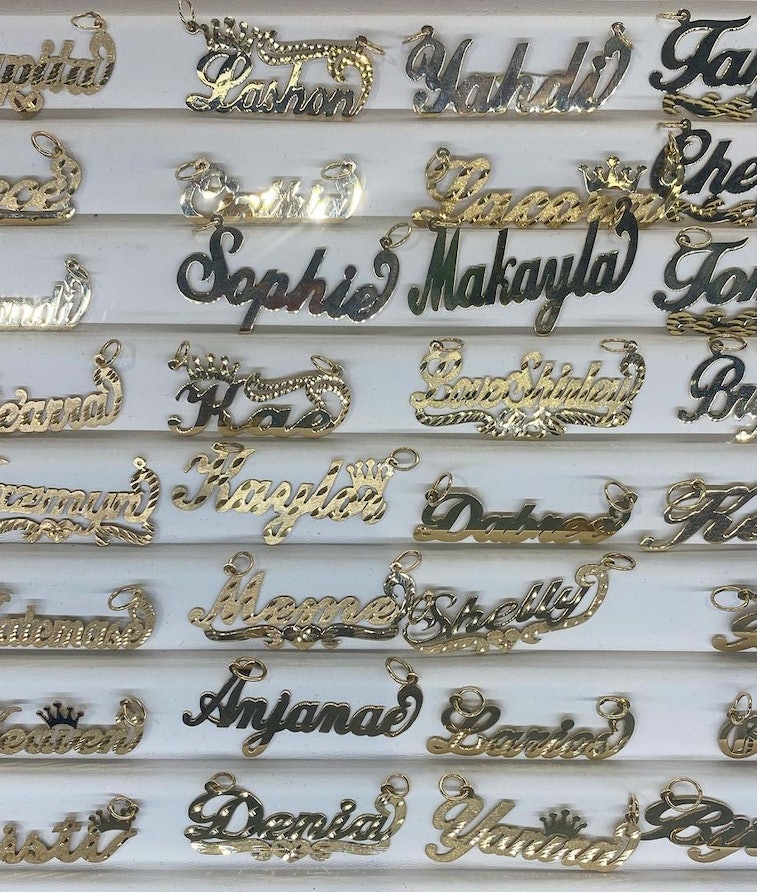 Chances are, someone is wearing a piece of jewelry with your name on it. It might be gold or silver, maybe wrapped in diamonds or carved in puffed print, but what they all have in common is their sentimentality.

Custom nameplates, which in this case refers to jewelry bearing a person’s name, initials, or other special word of choice, are a popular gift for Valentine’s Day and birthdays. So why is everyone obsessed with wearing something as unforgettable as their name on a necklace?

Nameplate jewelry doesn’t stem from one culture, it overlaps between different regions, time eras, and groups of people. Pharaohs and officials in ancient Egypt used inscribed signet rings as a way to sign documents. In the late 19th and early 20th centuries, Victorian women in England wore silver and gold brooches with their names carved in. Classic Hawaiian heirlooms started to include name-branded bracelets at the turn of the 20th century, and the pieces were fully incorporated into disco outfits by the 1970s.

What really bolstered its cultural notoriety, however, was the hip-hop era. Big, flashy jewelry became popularized during the '90s when artists like Lil Kim, Tupac, Biz Markie, and Aaliyah donned heavy diamonds spelling pseudonyms, nicknames, or brands on their necks, fingers, and belts. Today, New York is still a hub for name-specific jewelry, seen on streets everywhere from the Diamond District to Harlem.

“It has way more of a personal meaning when you customize it.”

Will Selby, a celebrity jeweler, believes custom jewelry is a way to invoke a sense of belonging. “A piece of jewelry is not as simple as something that just shines when the light hits it,” he tells Input in an interview. Sometimes it’s representing a company, like the October’s Very Own “O” chain Selby created for Drake, and others it represents overcoming a struggle. “It has way more of a personal meaning when you customize it,” he says.

Personalized pieces can range anywhere from less than a hundred dollars into the thousands, depending on the design. Selby has created customs for Drake, Fabolous, and A$AP Ferg, and he notes that in order for it to be truly special, it requires a personal connection, like when he designs a nameplate for a client’s child.

Perhaps the most (and only) comprehensive study of this sentimental phenomenon comes from an Instagram account run by Marcel Rosas-Alas and Isabel Flower. Documenting the Nameplate, an open-call digital book that celebrates nameplate culture, started in 2015 as a passion project and has amassed more than 4,500 followers on Instagram.

“My first nameplate was a gift from my father when I was around 8 years old.”

The Instagram account features hundreds of societal and personal references on rings, bamboo earrings, necklaces, paintings, and more. Contributors submit tales of inheriting familial pieces or feeling more connected to parents, like one that reads: “My first nameplate was a gift from my father when I was around 8-years-old…Growing up I could never find my name on a keychain…So wearing my name in a gold chain was part of my identity… My dad’s no longer with us so this nameplate means much more now.” Another post features an Anita nameplate captioned, “Me llamo Anita no Ana,” meaning “My name is Anita, not Ana.”

“Names are the essence of who we are and tell important stories about our lives and family histories,” Rosas-Alas and Flower told The Face in a recent interview about their project. “Nameplates can possibly offer a sense of visibility in contexts where recognition has otherwise been denied or diminished.”

For people of color, being called the wrong name or stereotyped because of an “ethnic-sounding” name is almost a sad rite of passage when having to integrate in Western culture. LegalZoom, a legal services company, stated that one of the top reasons people change their names is to make it sound more or less diverse.

Meanwhile, in the digital universe, a quick internet search of nameplate necklaces hardly traces back to any of these hip-hop culture references or personal experiences. Instead, it brings up results about HBO’s New York darling Carrie Bradshaw, the start of Sex and the City, and that infamous “Carrie” necklace she found at a flea market. You’ll also come across The M Jewelers, a jewelry boutique worn by Gigi Hadid and Kylie Jenner — but nothing about the jewelry’s roots in Black and Latino culture.

Patricia Field, the costume designer responsible for Bradshaw’s “ghetto gold” nameplate (her character’s words), said she drew inspiration for the piece from the “Borough Kids” in New York. The TV show sparked a newfound appreciation for the pieces, but those behind it were ignored when it was given to a white character – not that the show has many people of color to put it on to begin with.

Nameplates are a response to gas-station bracelets and department-store mugs emblazoned with names like Katie and Becky.

While having diverse representation in the media is important, identifying and connecting to it in the real world is even more so. Collier Meyerson, a journalist, wrote in 2016 that nameplates “are a response to gas-station bracelets and department-store mugs emblazoned with names like Katie and Becky.” But on a grander level, they’re widely sentimentalized by younger generations who want to feel connected to their heritage, as documented on Rosas-Alas and Flower’s page.

Between 2019 and 2020, jewelry companies reported a 38 percent increase in custom jewelry sales and it was especially popular for millennials, who were the top jewelry buyers in 2019. That’s because, thanks to social media, there’s an increased interest in having individualized, one-of-one pieces that mirror nostalgia or personal sentiments, like a family heirloom.

For Latinos specifically, gold jewelry bears heavy meanings of royalty, spirituality and religion, and freedom that dates back to Indigenous civilizations. Today, gold pieces are gifted at every major life event from birth to weddings, for spiritual protection and coming of age. Passing these traditions not only brings an element of nostalgia for the pieces worn during childhood, it also carries the weight of a rich heritage.

Nowadays, customized nameplates have extended past necklaces and rings. Sneaker dubraes can flex a name or set of initials courtesy of KeepMeLaced on Etsy, and Instagram shops like @rebeldawgshop create extravagant pet tags decked in glitter, engravings, and graphics. Custom, high-quality pieces also eliminate the danger of mass producing cheap, unsustainable costume jewelry, like those sold on fast fashion sites like Shein, that get disposed of as soon as the material begins to tarnish.

Though I have a fairly common name, I grew up wishing I could have a more American-sounding one like my classmates — especially every time a substitute teacher pronounced it wrong. But, like most of the people on Rosas-Alas and Flower’s page, the nameplate I have now is a symbol of identity that goes past a mispronunciation. If you plan to gift one for next Valentine’s Day, rest assured that a nameplate necklace will never go out of style. Plus, wearing it around the neck is closer to their heart that way.