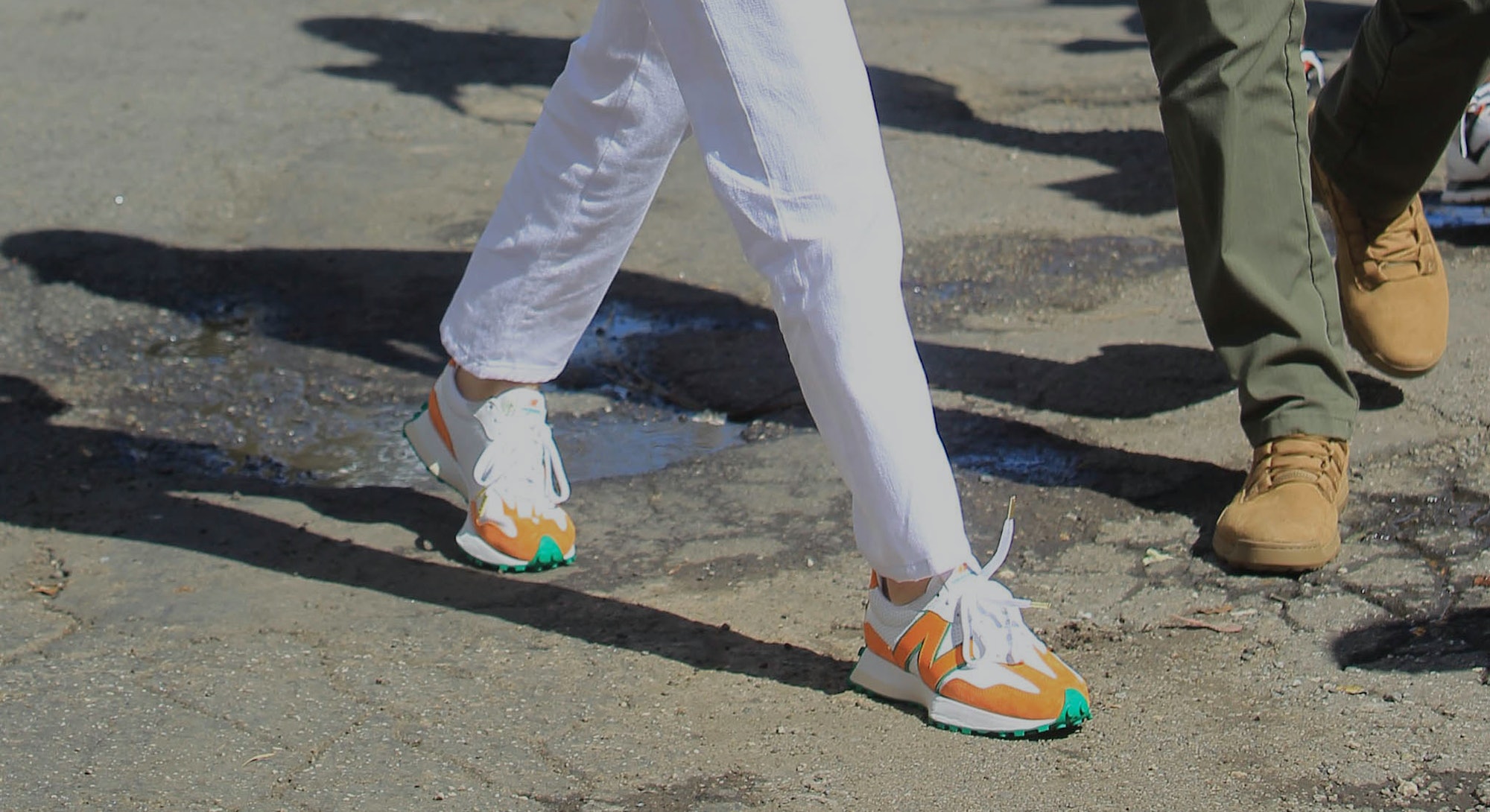 In January, during Paris Fashion Week, Casablanca sent silk pajamas, dalmation print furs, and an abundance of opulent prints down the runway’s marble floors. Connecting each look were orange and green footwear from New Balance.

Sneakers are no longer foreign to the fashion week circuit, and Casablanca founder Charaf Tajer has quickly emerged as a designer to watch by taking the elegant cues of womenswear and injecting them into mens. Those two worlds have now come together with Casablanca’s first sneaker collaboration, a moment of coronation for any nascent brand today. That such a coronation would come with New Balance may have been a surprise in the past. But less fussy running sneakers, also known as dad shoes are enjoying a moment. And as seen by the brand’s output in this still-young year, the dad-approved sneakers are undergoing a serious revitalization.

With a separate license in Europe and a factory in Flimby, United Kingdom, New Balance has had the attention of sneakerheads abroad for more than a decade and a half. In the United States, however, where the brand was founded in 1906, it hasn’t enjoyed the same youthful appeal. Discount models in department stores have, unfairly or not, cast New Balance as a sneaker for older cohorts. Conjur the image of a celebrity wearing a pair and you’ll probably think of Steve Jobs or Larry David — a far cry from Michael Jordan or Kanye West.

The company hasn't been without controversy either. New Balance founder and chairman Jim Davis' support for Donald Trump, including a nearly $400,000 donation, created a scandal, causing the company to release a clarifying statement. "New Balance did not endorse a candidate in this presidential election or any other," it said. "An employee’s personal support of a candidate does not equate to a company endorsement." After Matthew LeBretton, the company's head of public affairs, voiced excitement for a change from Barack Obama's trade policies, a spokesperson clarified that New Balance "does not tolerate bigotry or hate in any form."

Years later, the outcry has faded.

New Balance's invigoration today can be attributed to a reorganization of its structure and placing an emphasis on the youth market in its home territory. Joe Grondin is spearheading that movement as the global manager of collaborations. Under his direction, New Balance has seen hit releases from Aime Leon Dore, Paperboy, and Joe Freshgoods this year alone. And 2019marked the beginning of the brand’s partnership with ALD, as well as No Vacancy Inn (from West-affiliate Tremaine Emory) and the continuation of its work with Stray Rats. Add in the hype for the Casablanca 327, which was supposed to drop this Saturday before being delayed by the coronavirus, and New Balance is on a serious hot streak.

Before taking the gig, Grondin was one of many product managers tasked with finding creative partnerships, “everyone’s part time job,” as he puts it. A more regional focus paid dividends in Europe, with collaborators including Solebox, Sneakersnstuff, and Slam Jam Socialism; as well as in Japan, where Americana is revered, with Mita, Mad Hectic, and Beams.

The U.S. hasn’t had its shortage of New Balance collabs either — with KITH, Bodega, and Concepts as longtime partners — but the numerous remixes of the 997, 998, 574 haven’t created the same excitement stateside. The silhouettes have their ardent followers, but haven’t won over many newcomers. As someone put it more harshly in a tweet to Joe Freshgoods prior to his 992 release, “Never did I hear somebody wait in line for a pair of NBs.”

Freshgoods made that user eat his words by turning them into a T-shirt and pairing a photo of it alongside the very line for his New Balance release in Chicago. He may have had a point in the past, but today the narrative has changed. New Balance is demonstrating it can be consistently cool.

“A lot of those shoes that exist in the U.S., like a white leather NB shoe that you find at Kohl’s or Dick’s, those don’t exist outside the U.S. That stigma doesn’t exist,” Grondin says. Those shoes are vital to New Balance’s business, much like the dad-friendly Air Monarch is for Nike. The difference is that the Monarch hasn’t soured enthusiasts on the entire brand.

It helps that New Balance is shifting its collaborations toward new silhouettes and those that haven’t been as relentlessly reissued Bringing in new partners on fresh models garners excitement on two fronts. “Doing these projects is a way to remind people, especially young kids in the U.S., that New Balance can be relevant for them,” Grondin says.

Aime Leon Dore, the New York-based brand sitting on the intersection of sportswear and splendor, began with the more familiar 990 (which Stray Rats has also collaborated on) and 997 last year. For its first release of 2020, ALD took on the New Balance 827, which released in 1997 as an elite running shoe for its time. Many sneakerheads were unlikely to recognize the long-abandoned model, yet it still created an immediate air of familiarity with its late ‘90s/early ‘00s aesthetics. In ALD’s hands, the 827s were dynamic and colorful… but also refined and tasteful. In other words, they were instant classics, sneakers likely to endure for years to come.

“They’re amazing at color, so we’re pretty confident in their ability to execute a really good product.”

“They just do a really good job of curating content and being able to tell a premium product story that doesn’t always have to have a flashy product,” Grondin says of Aime Leon Dore, which will be New Balance’s headlining partner for the next few years. “The go-to-market strategy is almost more important than the product itself. They’re amazing at color, so we’re pretty confident in their ability to execute a really good product. But the way they can bring it to life from a styling and storytelling perspective makes them a key partner.”

A key part of that storytelling has been the resurgence of Ma and Pa Balance, a pair of elderly but hip characters used by New Balance to promote the 320 in the ‘60s. ALD has used a new pair of seniors to begin teasing the 997 and 827 on Instagram. It’s a choice that seems to serve as a tongue-and-cheek acknowledgement of New Balance’s reputation for appealing to older crowds, while also showing how the shoes look as part of an entire outfit.

Paperboy, the Parisian restaurant turned proto-streetwear brand, also worked on a New Balance model from the late ‘90s. The 801 is an all-terrain shoe that sold 1.5 million units upon its release in 1998 and was brought back into the fold in 2019. Taking it away from its more rugged appearance, Paperboy hit it with colorful clashes of pink, purple, and neon green. It’s still available at Footaction, making it a sleeper hit, but shows the value of bringing in voices from the outside.

Erik Fagerlind, co-founder of Sneakersnstuff, says New Balance’s strategy of working with more niche collaborators has worked in creating more excitement among American youth. “The world looks different now, and the smaller brands have taken a long time to catch up,” he says. “They all have the possibility to be the number three brand. But they have to change their behavior, their tone of voice, they need to address the new generation and tell new stories.”

With Casablanca, New Balance is debuting an entirely new silhouette in the 327. Grondin says the team at New Balance sees the shoe as having a “twisted ‘70s look” but had a difficult time finding the right partner to work on it. Casablanca, which he first discovered via wheatpaste posters during Paris Fashion Week two years ago, ended up making perfect sense. The brand looks like its founder, who’s been named an LMVH finalist this year for his work at Casablanca. Both look straight out of a beach resort with vibrant colors and prints; a hint of dirtbag, but an oh-so-seductive one.

“We took a risk, but we think that kind of style with Casablanca will continue for the next few years.”

Casablanca showed three variations of the shoe at PFW but whittled it down to two for the release. One is dominated by orange, from the once-piece mustache and heel counter to the logo and fierce stripes atop the toe. That bright citrus is countered by green trim and an octopus-like sole that runs all the way up the heel. More muted is the other version, which adds even more green by replacing all the orange components. Only the tongue and insole features citrus on the logos.

“Usually new brands like that don’t get a place within the official Paris runway schedule,” Grondin says. “The fact that they were on the books right away showed us something. We took a risk, but we think that kind of style with Casablanca will continue for the next few years.”

Even though the shoe hasn’t yet released, it’s safe to say the risk has paid off. Even prior the Kendall Jenner cosign, when she was spotted wearing the orange pair in Los Angeles, excitement amongst sneakerheads was already high. The culture is fickle, but it doesn’t take a Jenner to sway it.

Fagerlind’s sees a revitalized New Balance as a boon to sneaker culture as a whole. Adidas began the trend of collaborating with fashion designers, and Nike took the idea even wider. In the five or so years since, the two have overwhelmingly dominated the most talked about sneakers. Now, he says, “you can see others catching on, and I think that’s what we need in the sneaker community.”

A snarky Twitter user may not have been lining up before, but with more collabs from Aime Leon Dore, Casablanca, and other brands in the pipeline, countless more people will.