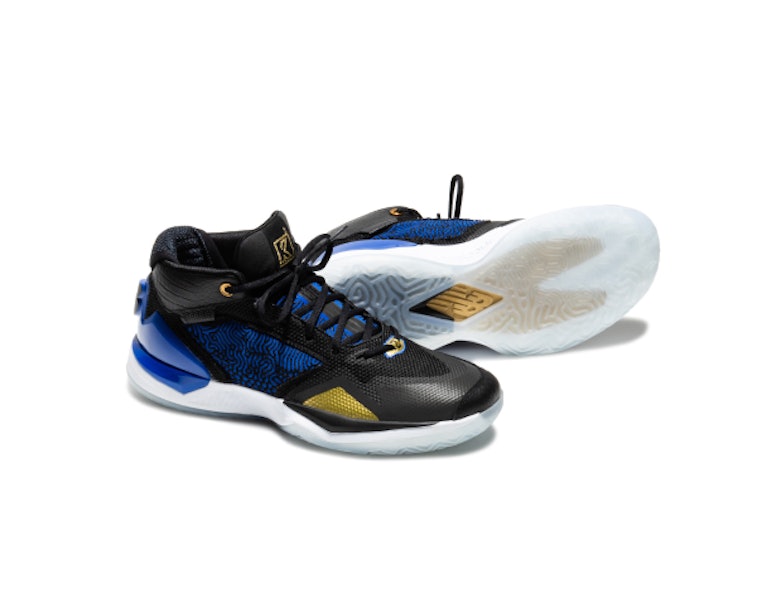 Kawhi Leonard has been playing in the New Balance OMN1S for the last year and a half, including his NBA title with the Toronto Raptors, but it wasn't technically his signature shoe. Now, as the NBA playoffs begin today, he finally gets a shoe to call his own.

The Kawhi 4 Bounces is Leonard's first signature shoe with any brand and marks a huge step forward for New Balance's budding basketball division. The low-top sneaker is named for the unlikely bounce in Leonard's game-winning shot against the Philadelphia 76ers last year to send the Raptors forward to the Eastern Conference Finals. While basketball sneakers aren't what they used to be, it's not a bad looking shoe. It's certainly better than Joel Embiid's recently debuted Under Armour sneaker, giving Kawhi yet another win over the Sixers.

Texture galore — The Kawhi 4 Bounces' upper is flush with personality, a far cry from Leonard's robot-like demeanor. A wavy pattern on the quarter panel draws the most attention, but the most Kawhi element is the collar strap that echoes his signature cornrows. Those lines bleed into a crocodile print, while his 1964 Chevy Impala informs the eyelets and the quilted heel pad.

On the technical front, a FuelCell midsole provides optimal energy return for Leonard's explosive game. On top of it is a performance plate that extends across the entire midsole to support his cutting and jumping while providing stability. The partially knit upper uses New Balance's Kinetic Stitch technology, which utilizes data for placement in key areas.

Releasing this week — Leonard's first signature shoe will be available straight away, with a release date set for this Thursday, August 20. Priced at $160, it'll arrive on New Balance's site in a black, blue, and gold color treatment inspired by the pair of OMN1s Leonard was wearing during the iconic, namesake shot.

Releasing alongside the kicks will be a pair of mismatched slides in the Los Angeles Clippers' blue and red. A range of apparel will also include a jacket, pants, and T-shirt — none of which are as good as the "Fun Guy" shirt released after his NBA title and still available now.