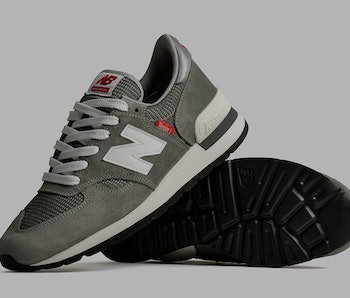 After the successful revival of its ‘80s 550 sneaker, New Balance is bringing back another retro silhouette, just in time for its 40th anniversary. The brand plans to pay homage to its seminal 990 line through a new MADE “Version Series,” kicking off with a previously retired 990v1 sneaker. New Balance will then launch its following archival models — the 990v2, v3, and v4 — throughout the summer and fall.

As a nod to the 990’s 40th “Ruby” anniversary, the new collection showcases its heritage, while also updating the vintage design with subtle ruby accents. First released in 1982, the 990 was known for its sleek design and high price point — it was the first runner ever with a retail price of $100 (equivalent to $277 in 2021). Still, the line is considered one of New Balance’s most successful franchises, and with retro styles in demand, that wave will only continue.

A renovated classic — Made in the United States, the 990v1 “Version Series” boasts a traditional mixture of mesh and suede, all dressed in gray and centered around a large white N logo on the midfoot. To differentiate the new model from its original, however, it’s been updated with hits of ruby red near the midfoot and tongue tags. Underfoot, the look is finished off by special printed insoles, a cream heel clip, a two-tone black and white EVA foam midsole, and black rubber outsoles.

All forthcoming 990 sneakers within the MADE “Version Series” will also boast ruby red accents, as well as nods to the version (v1, v2, v3, or v4) and original date. Each of the shoe’s soles, inserts, and dust bags bear an image of the clock tower at the New Balance factory in Lawrence, MA to further represent the rich heritage of the 990 line.

“There are only a select number of shoes in our industry that can be referred to as iconic, the 990 is one of them,” said Chris Davis, CMO and Sr. Vice President of Merchandising at New Balance, in a press release. “The 990 series represents the pinnacle of Made in USA craftsmanship and an understated elegance that transcends the cyclical nature of trend.”

More retro designs on the way — New Balance begins its celebration of the 990 MADE “Version Series” on June 17, when the 990v1 sneaker launches on the brand’s website. Similarly-styled versions of the shoe, including the 990v4 and black, gray, and navy iterations of the 990v2 and 990v3 sneakers, will follow throughout the summer and fall. New Balance has called it — it’s the summer of vintage shoes.