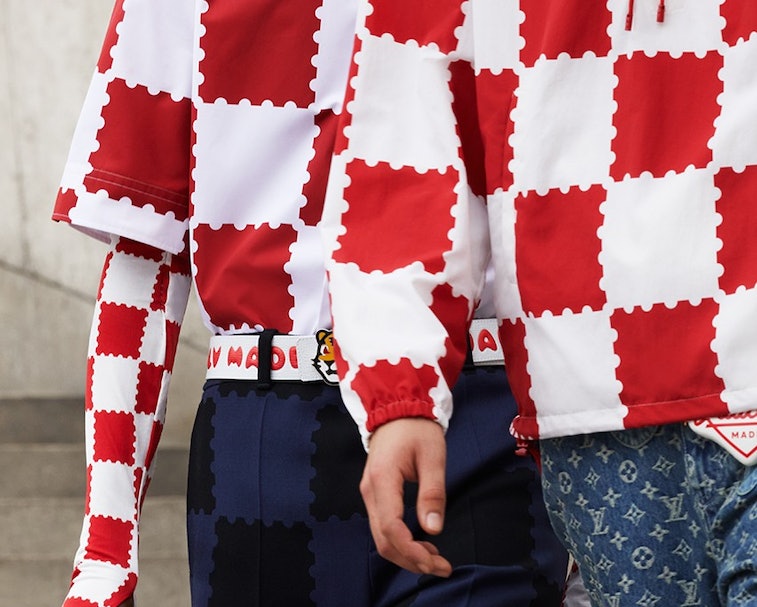 Virgil Abloh and Nigo are continuing their collaboration for Louis Vuitton by releasing the lookbook for their LV2 line’s pre-spring collection. Together, the two designers return to old-school tailoring meets streetwear, this time with an emphasis on bold color blocking.

Checkerboard prints and stripes are the defining motif of Abloh and Nigo’s “creative conversation,” sigh, the best results of which come through in puzzle-like tops and trousers. Suiting, oversized short-sleeve shirts, hoodies with hockey drawstrings, fleeces, and trousers all look like the foam play mats that lined the floor of your childhood — which is not at all a drawback.

There are plenty of graphics, too — Tigers done in up in the style of Nigo’s Human Made also appear throughout the collection on leather jackets, shirting, and baggage. Much more silly from the animal kingdom is monogram shoulder bag shaped like a duck, which is sure to be one of the most expensive LOLs you can ever wear.

Striped monograms work surprisingly well on what have become staples for the LV2 line, including a tonal brown cardigan and tailored jackets in black and silver or red and cream. Where the monogram falls off a cliff, however, is on a patchwork denim jacket and on the line’s continued drip motif adorning full Canadian tuxedos, as well as leather jackets and bags. But because rich people have no taste, they’ll probably be a hit.

The fashion poncho also makes an appearance decorated in a shrunk monogram print for what is the highest risk, highest reward piece of the collection. A raincoat also plays with LV’s signature motif, breaking it up into pinstripes that work shockingly well.

Keep your eyes out — A release date has yet to be announced for Abloh and Nigo’s latest LV2 drop, which should only matter if you’re utterly caked up. For the rest of us, the jig ends now with taking in the eye candy until it inevitably causes a stomach ache.