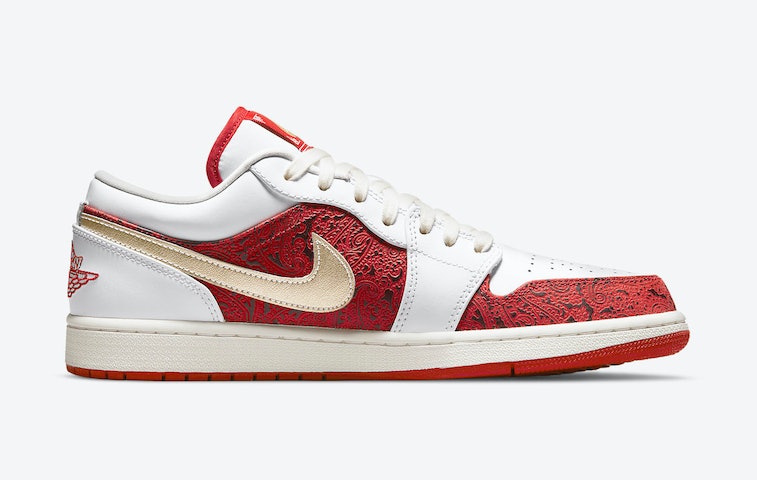 Since sneakerheads are always being played by the SNKRS app, Jordan Brand has unveiled a shoe dedicated to playing — cards, that is. The label debuted an Air Jordan 1 Low “Spades,” decorated with an intricate paisley print reminiscent of card patterns. And if the design weren’t enough, the sneakers also represent a fairly strong hand — the King and Queen of spades.

Jordan Brand revealed this silhouette after a similarly styled Nike Air Force 1, which also boasts a playing card theme. But instead of being dressed in white and red, like the AJ1 Lows, the AF1 comes in a dark black, with gold hits on its Swoosh and heel branding. Red can only be seen on the shoe’s outsole and insole.

Despite the popularity of the AF1 model, we’re already favoring the classic design of the AJ1 Low. Its under-appreciated silhouette gives us a refreshing break from the range of Dunk Lows and AJ1 Highs that Nike is tirelessly pushing out.

Winning hand — The Air Jordan 1 Low “Spades” exudes the same luxury as the two face-cards it represents. With red, white, and gold shades, the sneaker also nods to the regal nature of the King and Queen, who partially appear on the shoes themselves. A “K” and “Q” are embroidered onto the sneaker’s forefoot foxing, while the spade suit — featuring a Jumpman motif — decorates the tongue.

Elsewhere, the footwear continues its fancy theme. A red paisley print covers the shoe’s mudguards and side paneling, mimicking the popular pattern seen on the back of playing cards. This print proves more long standing than a good hand, though, as it’s actually been etched into the shoe’s leather, giving this AJ1 Low a classy and expensive look. A metallic gold Swoosh only adds to this regal feeling.

The stunning silhouette is rounded off with red Air Jordan branding embroidered into its heel and matching fiery red outsoles. Creamy laces tie up the rest, contrasting the sneaker’s white eyelets and upper. Overall, the AJ1 Low is fit for royalty with its suitable shades and devotion to detail — but we might just see more on other upcoming models.

Wild card — Alongside the AF1, the Air Jordan 1 Low joins an anticipated “Spades” collection, which will further alter the card-inspired theme. While neither Nike nor Jordan Brand has announced a release date, we’re anticipating more styles to surface soon — perhaps a high version of the AJ1?

Like the collection’s namesake, we expect upcoming models to stick to the spade suit. There’s no denying that this AJ1 Low pair, however, is the winning hand. Let’s hope SNKRS doesn’t have the card stacked against us.