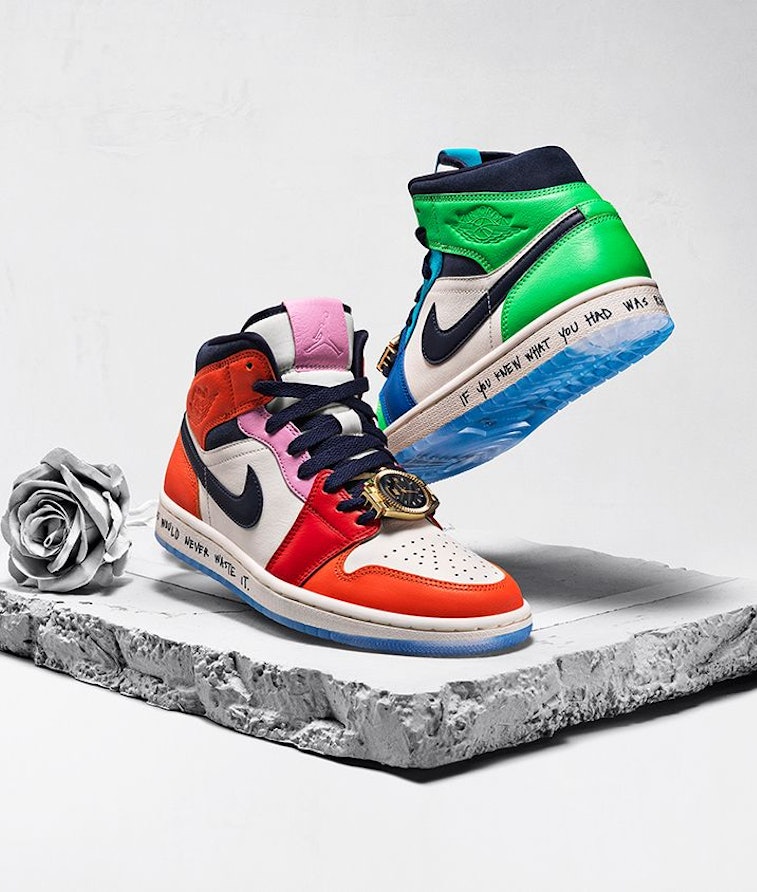 Streetwear lovers insist that the best part of sneakers is they can be used as a tool of self-expression — but there are certain pairs that, historically, have come with a bad stigma attached to them. Nike’s Air Jordan 1 Mid is one of those.

For decades, the silhouette has been getting the cold shoulder from sneakerheads everywhere, due mostly to the fact Michael Jordan himself never wore this particular style on court.

In the 1980s, the only bright colors you could find on a sneaker were on running shoes and women’s models, which gave Nike’s then-CEO Phil Knight the idea to break footwear’s color barrier. When Michael Jordan signed with Nike in 1984, designer Peter Moore created a sneaker that would represent basketball’s latest prodigy and provide an opportunity for this fresh market: the Air Jordan 1.

The NBA did ban the original black and red AJ1 because it was against the white shoe dress code, but Nike happily paid the $5,000 fine any time Michael wore them in games to amp the shoe’s marketing. As 24-year old Michael Jordan went on to receive every major honor in the NBA during the 1987-1888 Bulls season and, as a result, the Air Jordan 1 High skyrocketed in popularity and value.

Designer Tinker Hatfield later created the Air Jordan 3 for Michael, a custom High with a lower height and less ankle restriction. The silhouette wasn’t the Mid we know today, but it opened the door for Nike to launch the official Mid in 2001. It was an affordable and accessible alternative to the Jordan 1 High — but without the exclusivity or celebrity appeal, the shoe was left in the dust by collectors and sneakerheads.

At first glance and to the untrained eye, the High and Mid are fraternal brothers. Though height is the main differentiator, the most noticeable is the tongue logo. OG Highs have the original “Nike Air” branding on the tongue while the Mids feature the Jumpman and “Air” below it. The former also has nine lace holes, while the latter has eight.

Still, if the two are so physically similar, what’s with the cultural gap between them? Historically, the difference has more to do with the hype and price point than the shoe’s functional DNA.

Scoring a High doesn’t just complete an outfit, it’s a stamp of victory, either in winning a raffle or having the funds to buy a shoe that’s often sold at lavish resale prices. Because of the work needed to secure a High, settling for a more available Mid is deemed a consolation prize and a laughable defeat. In the mind of an old-school collector, going through that shame for a silhouette that Michael Jordan didn’t even play in is too much to bear.

When Mids got the reputation of being less luxurious, they were associated with a lesser market value, while the term “mid” (describing something as below average) didn’t help either. Collectors don’t want to be caught with a “mid” shoe, though many don’t realize when sneaker hype itself is driven by something much more analytical. Unfortunately, sneaker collecting as a hobby today seems to be less about nostalgia and more about money, resale value, and a brand’s good marketing strategy.

Adena Jones, co-founder of Another Lane, a community for sneaker enthusiasts, told Input that Mids got a bad reputation from followers because of the cheaper price, though there are a few exceptions. “The new wave of sneaker influencing says that the more impressive your sneaker, the cooler it is, when in fact that’s not what it’s about at all,” she said. “The Melody Ehsani joints were Mids. If everyone hates Mids so much why were they at astronomical prices? It’s a follower-type culture in that sense.”

Chad Jones, sneaker historian and Another Lane’s other co-founder, believes the sneaker industry as we know it has marketing departments to thank. “There’s a lot of product placement that goes on with shoes that a lot of people are not paying attention to,” he notes. “People don’t care unless it’s exclusive, co-signed, and has good resell price.”

Having Eshani’s name attached to the Mid gave it its notoriety. Though social media as a whole dictates what the new collectors are buying, Chad believes it's the celebrities and influencers who have the power in determining a shoe’s legacy.

In a trickle-down effect, celebrities and those getting free merchandise have the upper hand in determining what’s hot or not on social media, Mid included. “They’re getting the limited-access, really expensive stuff like the Diors and the samples, and more influencers are gravitating toward that and making their Tik Tok posts about it,” he said. “Some of these big Youtubers will spend all this extra money just to say they got it.”

“Men are the ones that frown upon the Mids.”

Jas “Kixie” Gonzalez, co-founder of InHerSoles Collective, a platform for female streetwear aficionados, defends a more gender-based idea against the Mid hate. She has a problem with women like Melody Ehsani getting Mid collabs while Travis Scott is exempt. “Men are the ones that frown upon the Mids,” Gonzalez told Input. “At this point, I think it’s created a separation of gender, where it went from people not liking Mids and thinking they’re ugly to thinking they’re for girls. That’s why so many men think Mids are gross. Because [Jordan Brand] is giving them all to women.”

Women are often excluded from the boy’s club that is the sneaker world, making the Mids’ feminine association even more excuse for some men to snuff out the silhouette and its wearers. Despite the put-down, women are taking it as an opportunity to up their game and claim the silhouette as their own.

Women are incorporating more streetwear and sneakers into their wardrobe and starting with classics like the Jordan 1 (Mid), which have always been more in a beginner’s price range — well, until now. On StockX, according to GQ, sales of women’s Mid sizes are up 1,000 percent since 2019, contributing to an overall 200 percent sale increase of the shoe. This could also be due to the success of the 2020 Netflix documentary, The Last Dance, which presented the Air Jordan 1 in a new light.

Despite the long-term bad reputation of the Mid, it’s newfound popularity (and increased price) is switching the narrative in an invisible-nerd-turned-popular-jock way. Older sneakerheads may have kicked the Mid to the bottom of the sneaker food chain, but its rise in price, sales, and street cred is giving it an exclusivity it hasn’t had before, and in turn, making it more desirable and harder to cop.

However, internet hypebeasts and collectors often forget another side of buyers.

“Your collection is a reflection of who you are, not who somebody else is.”

Jordan True Flights, popular in Hispanic communities, were dubbed “Mexican Jordans” because of the demographic that would often wear them. In reality, many buyer trends originate in local communities where there’s always availability of shoes like Mids on the store shelf.

Though there are Mids that cost as much as, if not more than, Highs, there is an abundance of Mids in stores and online to keep up with the demand. For every highly anticipated and sold-out High, there are a hundred Mids to offset it, giving an aura of “settling.” However, this warped perception of access has made hypebeasts and sneakerheads alike turn their nose up at a shoe that’s just as good as any other.

One demographic Gonzalez describes as “‘the forgotten sneakerhead” isn’t receiving the marketing message or even caring about the hype, such as the working mother who buys pairs for her kids. “[People] forget that there are individuals who aren’t influencers, who aren’t posting sneakers, who just wear them every day because it’s their lifestyle and have families, like those buying matching mommy and me sneakers,” she said. “Mids always have a lifeline in that market.”

If you scroll to the comments of almost any Mid critique online, you’ll find a slew of people defending it. Aside from a shallow joke or two, the hate for Mids just isn’t the majority anymore. The colors are clean, it’s still in the AJ1 family, and as one Twitter user said, people hate mids because “their internet daddies tell them to.” Meanwhile, some of the biggest social media influencers in the world, including Addison Rae and Charli D’Amelio, have made the Jordan 1 Mid their own — which has created a whole new hype around the shoe, for a generation that probably doesn’t even care who Michael Jordan is.

At the end of the day, the Air Jordan 1 Mid may just be a misunderstood silhouette living in the shadow of its higher-top older brother, plus a bad reputation that mostly stems from an elitist generation of sneakerheads. Chad Jones said it best, “Your collection is a reflection of who you are, not who somebody else is.”

If the Mid suits your foot, or you’re breaking into the sneaker game by making it your first pair, who cares what the seniors think. After all, we’re talking about the generation who thought a Supreme brick was worth a few hundred dollars. Wear it with pride and leave the grumbling to the old sneakerheads.