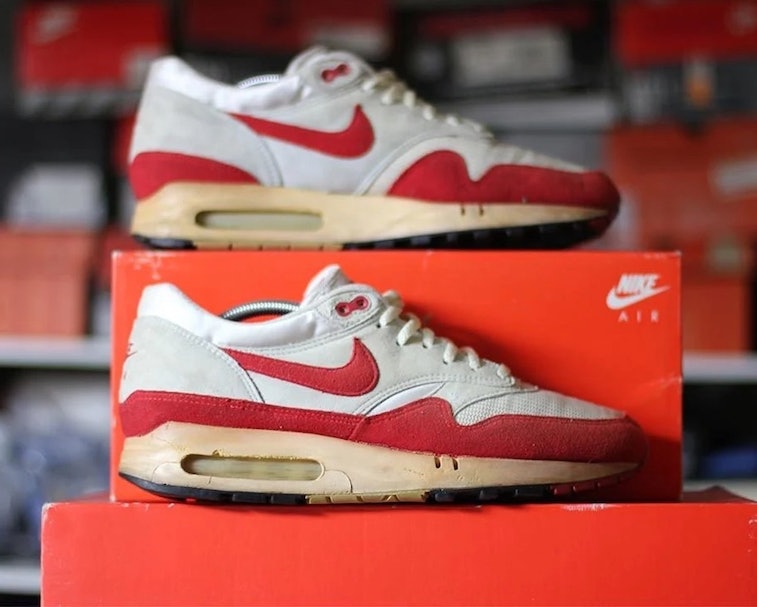 It’s taken some trial and error for Nike’s Air Max 1 sneaker to earn its place as one of the most influential and identifiable sneaker silhouettes in the brand’s history. Functionality issues caused Nike to pare down the size of the AM1’s original Air bubble, but a reissue will soon bring back the sneaker in its true form.

DJ Sneakerhead, host of the SNKRS Live’s on Nike’s SNKRS app, recently sat down with Nike Air Max product line manager Jamie Paige and footwear designer Jon Kosenick to discuss an upcoming rerelease of that 1986 model. They said it took three years of working on the Air Max 1’s original proportions to ensure it would hold up, and those efforts will satisfy the Air Max purists in 2023.

For the first time since in 35 years, Nike is dusting off that oversized Air Max 1. An early glimpse revealed by Sneaker News depicts an all-black sample showcasing the sneaker’s big sole. Although the black version is a wear test sample, the new release will feature the OG color scheme of red and gray. White mesh and gray and red suede dress the upper, while the Air unit is as long and visible as it was 36 years ago.

A big heart and sole — To the untrained eye, it doesn’t look like an Air Max 1 from this year has changed much from the 1986 model. But if you take a closer look at the original Air Max 1’s sole unit, which was designed by Tinker Hatfield, the Air Max bubble cushion is significantly bigger than its successors.

The original sole unit was longer and included four circles instead of the three that would become standard. This original makeup would prove to be flawed, so Nike had to tweak the cushioning technology to prevent deflation or popped Air bubbles. Nike quietly released the revised version of the sneaker in 1987, and it’s that year that the company calls back to as it now celebrates the 35th of the Air Max 1.

The Air Max 1’s true 35th anniversary will be next year, though, and Nike is already setting 2023 as the year it’ll return in its original, oversized form. With Air Max Day just having passed over the weekend, eyes will already be on next year’s March 26 celebration.