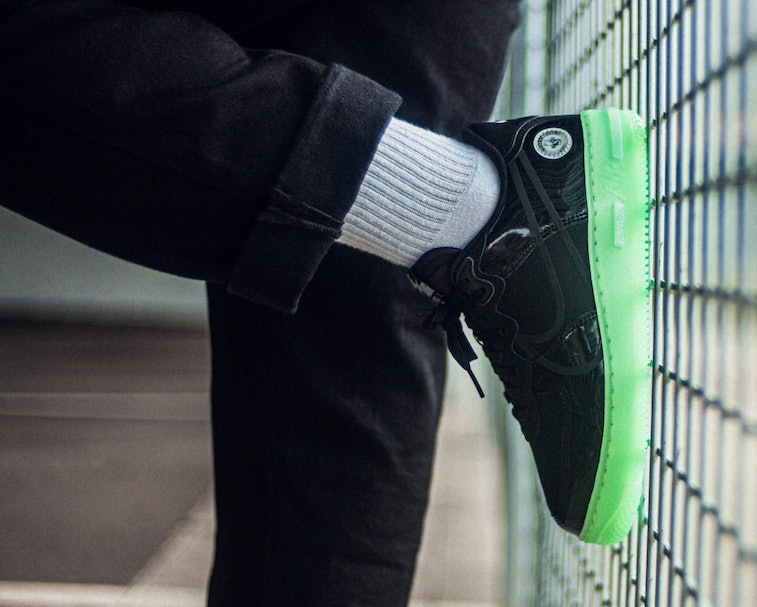 The NBA All-Star Game is just weeks away, bringing prime-time sneakers to go along with the star-studded event. One of the first such shoes has surfaced, a black Air Force 1 with a bright green sole packing more than meets the eye.

Officially dubbed the Air Force 1 React LV8 "All-Star," the sneaker adds React cushioning to the classic silhouette. This modern update should ensure a more comfy stride — and it being housed in semi-translucent green rubber saves it from the cursedness of all-black AF1s worn only by schemers and deviants.

The only thing really tying this upgraded Air Force 1 to the All-Star Game is a commemorative patch stitched near the heel. But we're not complaining, as this is a shoe you could just as easily rock courtside as you could in Berghain.

Patent leather, yes please — The Air Force 1's all-black upper features a mixture of glossy patent leather along with its matte and pebbled counterpart. And if you look closer at the patent panels, you'll notice it has a sort-of topographic pattern — better seen in leaked images than in the official ones here taken by the German sneaker store 43einhalb.

Also subtle is an indented and oversized Swoosh similar to the lines on a basketball. And on the medial side you'll find "D/MS/X" branding, pronounced "Dimsix" and intended to signify when Nike gets more adventurous with its established silhouettes.

Guess when they drop? — The NBA's typical All-Star Weekend will be condensed into one day: March 7. And to commemorate the (strange) occasion, the Air Force 1 React LV8 is scheduled to release the day prior on March 6.

43einhalb may have jumped the gun in putting up a webpage for the new Air Force 1, and so far it's the only retailer confirmed to have it. But we can expect more stockists to be announced soon — and for the price tag to be around the $145 figure converted from euros.