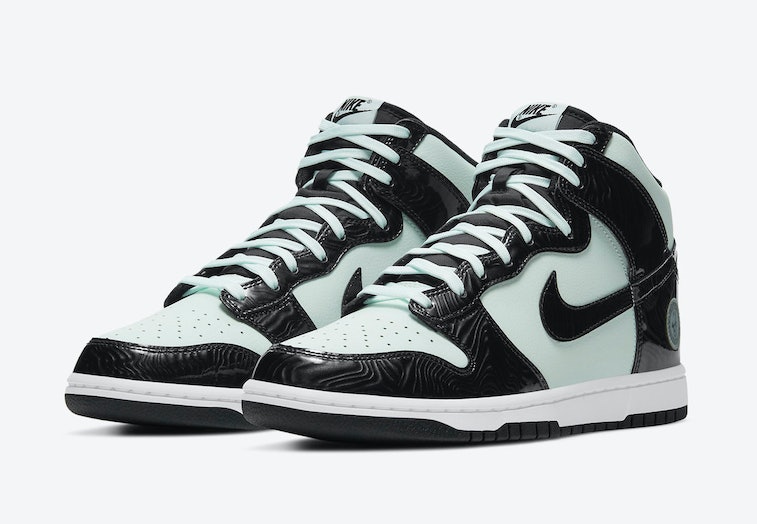 As one of Nike’s hottest silhouettes and first basketball shoes, the Dunk is a sneaker fit to celebrate the NBA’s 2021 All-Star Game on March 7. Just as the weekend begins with a Dunk, it’ll end with one, as Nike plans to release a thematic high top version of the shoe. Designed specifically for the 2021 All-Star Weekend, the sneaker boasts a teal upper, commemorative NBA All-Star insignia, and patent uppers.

Considering the limited availability of this Dunk, as well as the silhouette’s popularity and basketball history, copping the “2021 All-Star” Dunk High will be a challenge. There’s no doubt resellers are looking to mark up its price — prior to the release, it’s already listed on StockX for $200 — while collectors will try their best to buy retail. And of course, we’ll all be fighting against the beast that is Nike SNKRS, where the shoes are expected to drop.

Slam Dunk — Much like the classic “Be True To Your School” Dunk pack, this sneaker opts for a simple two-toned design. A minty green tumbled leather makes up the upper, while high-gloss black patent leather overlays and sleek Swoosh contrast its texture. But despite the shine of the overlays, the teal hue completely reigns over the shoe, covering its tongue tag and laces as well as the upper. A white midsole separates the mint shade from a black outsole.

Due to the ongoing pandemic, it was feared the All-Star game and coinciding activities would be canceled, or relocated. With a player bubble established, however, the show will go on at its intended court in Indianapolis. To memorialize the event, Nike’s Dunk High features a commemorative NBA All-Star insignia on its heel. The detail takes on the same teal color as the sneaker’s upper, while also noting the game’s host city of Indianapolis, Indiana.

While non-basketball fans might label the sneaker’s theme closer to mint chip ice cream than the NBA, its glossy overlays and official NBA insignia will have other sports fans drooling. Patent leather isn’t usually seen on the Dunk, a silhouette best known for its two-toned simplicity, making this iteration all that more exclusive. Polished design aside, though, you’ll have to make sure the shoe doesn’t slip out of your grasp.

Coming soon to SNKRS — After an initial delay and rumored February drop, Nike has confirmed the “2021 All-Star” Dunk High will drop March 9, unfortunately via SNKRS. The silhouette is slated to retail for $110 — a steal considering you can cop — and will likely resell for up to three or four times its original price. While the sneaker itself is commemorative, it’s worth a celebration if you get your hands on it.