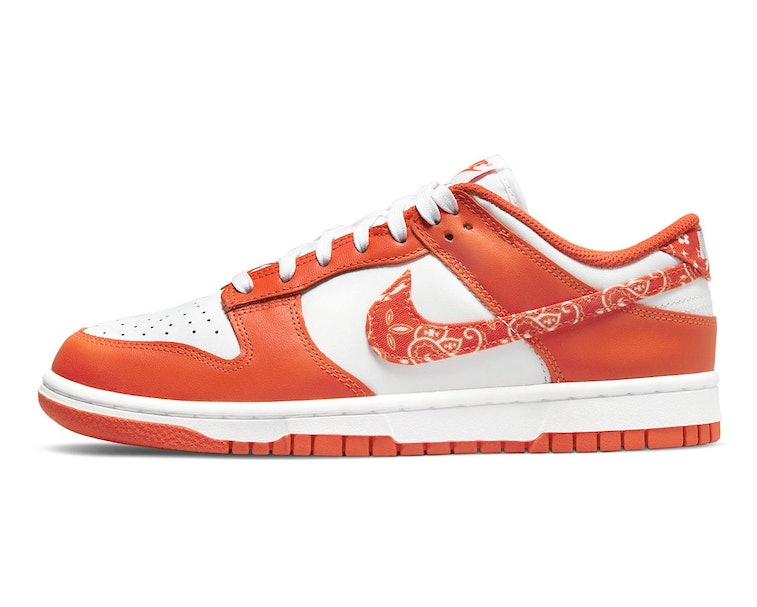 Following up on its blue and black versions released at the very end of the year, Nike is set to release two more of its Paisley Dunks.

Official images have surfaced for the “Orange Paisley” and “Barley Paisley” Dunk Low, which will soon double the amount of versions adorned by a bandana print. The orange version can be seen as a slight spin on the original “Syracuse” Dunk, while the light brown “Barley” deviates from the typical colors you’d expect to see on a bandana.

Both of the sneakers see the standard color blocking for the Dunk, only with a paisley print Swoosh and mustache setting the kicks apart. The two previous iterations from last year were released as women’s exclusives, meaning we can likely expect the same size limitations for the two sneakers any gender would appreciate.

Still one of the hardest sneakers to get — Nike is now in its third year of pushing its Dunk silhouette hard, and it continues to be one of, if not the most, difficult sneakers to get ahold of. Whether they’re from Nike or Nike SB, both the high- and low-top versions of the Dunk consistently sell out immediately and are usually marked up on the resale market by three-fold at minimum.

During the Dunk’s heyday in the ‘00s, highly sought after collaborations were paired with general releases that could easily be purchased at-will from your local boutique. Things aren’t so simple during this Dunk renaissance, however, as the sneaker has yet to show any glimpses of becoming easily accessible, even for the most simple of color schemes. It’s a tad depressing for longtime fans of the Dunk, but that’s the reality of a modern sneaker landscape in which even the staple all-white Air Force 1 Low is hard to come by.

A release date has yet to be set for the “Orange Paisley” and “Barley Paisley” Dunks, but we can likely expect them to arrive on the SNKRS app in coming weeks for the standard $110. Women’s-exclusive sizing won’t scare off men trying to score a pair, so expect ample competition whenever the kicks arrive.