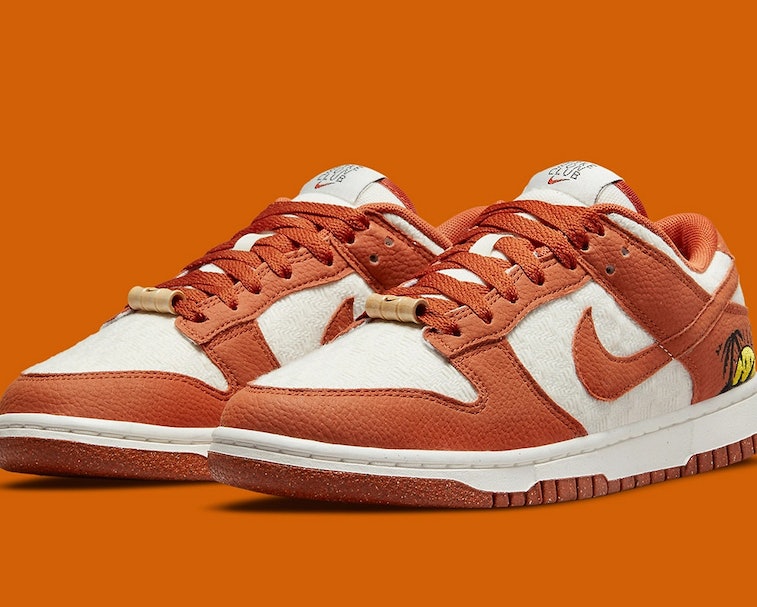 Nike is making sure your sneaker rotation is covered this summer. The Swoosh’s “Sun Club” pack is quickly growing, including multiple Air Force 1s, Dunk Lows, and a Blazer Low. The latest to join is a third Dunk Low presented in a “Henna” color scheme and fitted with plenty of motifs that’ll have you wishing you were at the beach.

When the sun goes down — While other models in the pack reflect on the brightest moments of summer, the “Henna” iteration takes after the warm glow of sunset and golden hour. Its upper is based on all-over white stitching with leather overlays coated in a burnt orange shade. The midsole is decked out in white as a contrast to the speckled dark orange outsole. The sole is also made of Nike’s Grind Rubber, a material sourced from footwear manufacturing waste, and the insoles further flex the Move to Zero initiative.

Nike adds some detailing throughout the kicks to add even more tribute to the warm season. Tongue tags feature a “Nike Sun Club” label with the undersides embroidered with two palm trees and a hammock, the perfect setup for a day well-spent in the sun. The lace dubraes are swapped with a mini stick of bamboo and at the rear lateral, Nike adds another embroidered graphic of a palm tree and a yellow Swoosh-smile sunset.

Choose your fighter — Elsewhere in the sustainable “Sun Club” pack are other Dunk Lows, including a light tan version with a shark fin Swoosh and a pair with a paneled sherbert color scheme. The latter has similar graphics as the “Henna,” but the differences in their palettes are truly night and day. As for the white and tan Blazer Low, the Swoosh also playfully mimics a shark fin. Air Force 1s and Air Max models (the 90 and 97 to be exact) will join the “Sun Club” as well, more or less following the same earthy color palettes and array of materials.

Other models in the “Sun Club” pack

To add the “Henna” Dunk Low to your artillery this summer, the pair will see a May 1 release at Atmos Tokyo and other global retailers yet to be announced. They’re the perfect way to ring in everyone’s favorite season, even if you don’t live near a beach and some palm trees.